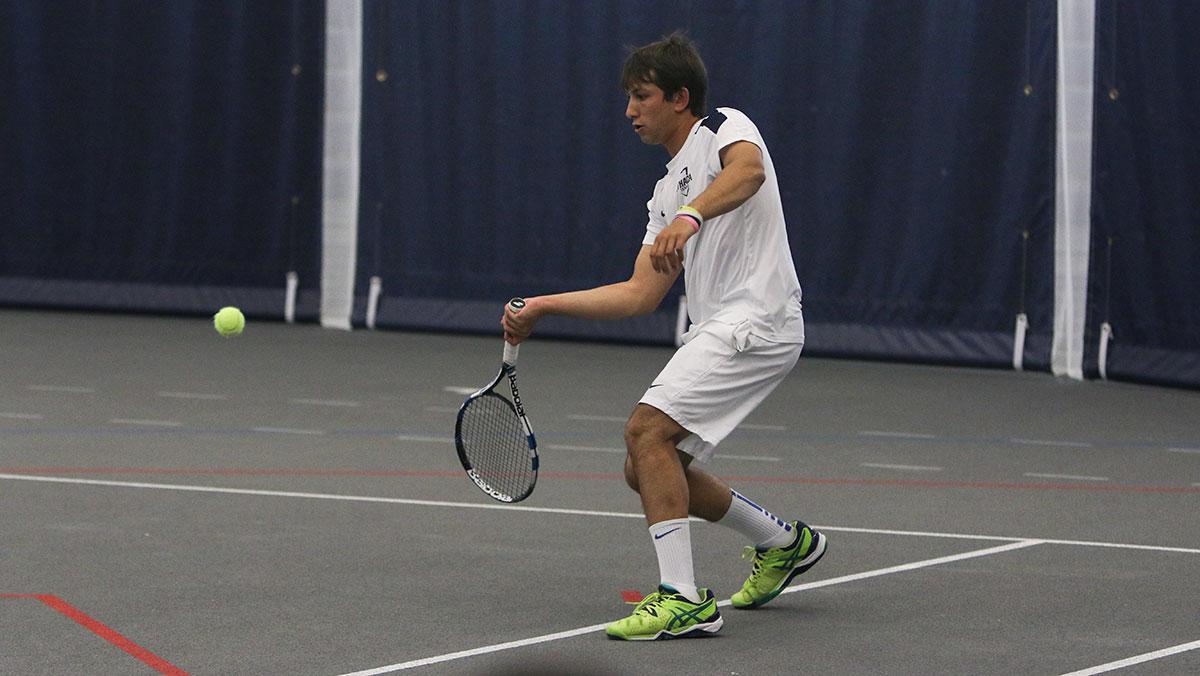 SEAN DULLEA/THE ITHACAN
Senior Chris Hayes plays in the last home match of his career May 1 on the Wheeler Tennis Courts against Connecticut College.
By Jaysha Patel — Contributing Writer
Published: May 2, 2016

Davis and Hayes earned a 6–1 win and faced a triple break point in their doubles but came back, earning a 9–8 win.

With the two wins, Hayes now has 106 career wins, 60 in singles play and 46 in doubles play. Hayes ranks eighth in school history for career wins, and is fourth in career singles wins.

Before the match, Hayes, who is the only senior on the team, was honored for his hard work and dedication. He said this was a great way to end his last home match.

“Today was really special to go 2–0 individually and get a team win in the process,” Hayes said. “I’m just happy I got to share this moment with great teammates and my family.”

In the other doubles matches, junior Nate Wolf teamed up with freshman Michael Gardiner earning an 8–2 win at the third flight, while sophomore Lorenzo Viguie-Ramos and freshman Stefan Lazarevic dropped an 8–4 decision.

For the women’s tennis team, the Bombers ended the regular season with a 5–4 loss.

Blumenthal teamed with freshman Taylor Ginestro and picked up a 8–4 win. Blumenthal is the only senior on the team and said she is sad to leave such a great team.

“It’s weird. I don’t think it’s hit me yet,” Blumenthal said. “It’s bittersweet because I’m excited for the future. I’ll definitely miss the girls, the relationships, tennis, the whole experience.”

In singles play, Kusak and junior Jodi Grosberg each won their matches. Kusak posted a 6–4, 6–1 win at the first flight. Grosberg came out victorious with 6–1, 4–4 win at sixth singles.

Kusak said she was happy with how doubles matches went.

“Doubles were really good today,” Kusak said. “We played really well, and Caroline did awesome at the net. She was hitting every overhead and every volley, so I think we are definitely starting to improve our doubles together.”