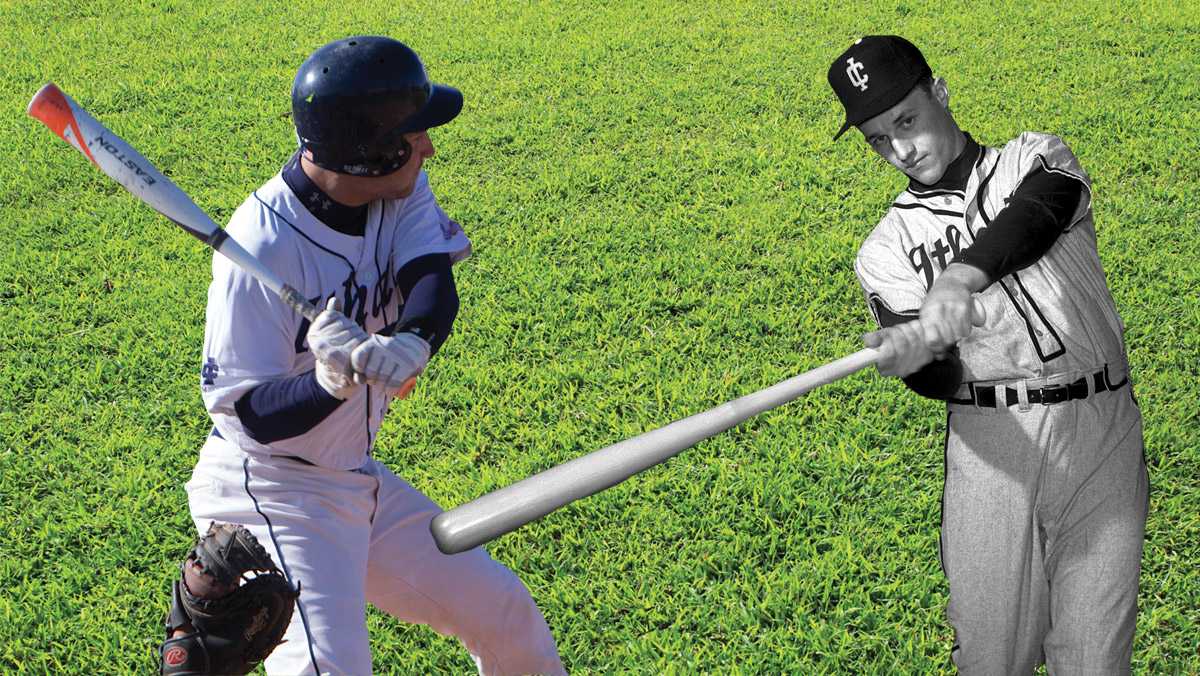 COURTESY OF ITHACA COLLEGE ARCHIVES AND CAITIE IHRIG / DESIGNED BY HAYLEY TARLETON
On the left, sophomore Adam Gallagher swings with an Easton bat while David Barton '67, on the right, swings with a wooden bat.
By Andrew Sullivan — Staff Writer
Published: April 12, 2017

A baseball bat is a hitter’s calling card. Bats come in all shapes and sizes, widths and lengths, and with various modifications — all tailored to the type of hitter who swings it.

Just as the sport of baseball itself has evolved over the past century, so has the equipment that its performers use. Particularly in the college ranks, baseball bats have seen drastic changes dating back to the mid–20th century.

Ithaca College baseball head coach George Valesente played for the Bombers as an undergrad from 1962 to 1966. During that era of college baseball, only wooden bats were swung by players, and only one brand of lumber was used: the Louisville Slugger, founded in 1884.

Valesente said he used the O16 more toward the end of his time playing for the Bombers because the bat offered more control.

“When I would get a thin–handled bat, I would over-swing,” he said. “I was pulling off the ball and being ineffective because I was swinging too hard. But the thicker–handled bat felt uncomfortable in my hands and kept me from over-swinging, which made me more productive.”

Valesente said metallic baseball bats were implemented into the college game around the late 1960s and early 1970s. He said he remembers ballplayers using metal bats when he coached the SUNY Brockport baseball team from 1972 to 1974.

The switch from wood to metal was mainly for practicality purposes. Because wooden bats were easily breakable, teams would often run dry of bats during games.

“I remember when we played here, we used to have two big bags of wooden bats, and we would crack a lot of them,” Valesente said. “We would be down to just a few bats, and at the end of the season, we were all using four or five bats.”

The first metal baseball bats that Valesente saw being used in collegiate baseball were Worth bats. The company began manufacturing aluminum bats in 1968.

In comparison to the metal bats used today, Valesente said the quality of the Worth bats was not up to par.

“[The Worth bats] made a pinging noise,” he said. “Grips were not comfortable because they weren’t using the proper leather on the grips. Sometimes, it would start to dent and ding.”

By the mid-1970s, Easton began to manufacture and distribute its own line of aluminum bats, which Valesente said “took over the market” through the 1980s, 1990s and early 2000s.

“[Easton] shaped them better and had better grips on them — rubber grips,” he said. “The barrel heads were thicker, so they didn’t dent or ding or anything and were very long-lasting.”

Henchey also used a Rawlings 5150 baseball bat his freshman year. During his sophomore campaign, he switched to Marucci bats, swinging the Cat 5, 6 and now 7. He said he chose to swap equipment for comfort reasons.

Both players use a “one-piece technology” bat, meaning the bats are not sectioned off and are one continuous piece of metal.

“We like the stiffer bat,” Henchey said. “It actually has a thicker handle. I don’t like the thin–handled bats. I think it’s too flimsy for me. It has almost too much whip, and then you end being late on the ball.”

The one-piece bat offers less flex but has a “stiff feel” when contact is made. The lack of flex when contact is achieved means little to no energy is lost, which permits growth in power.

A two-piece baseball bat, where the handle and the barrel are two separate sections, provides more flex when the batter connects with a pitch and also churns out more bat speed. The more bat speed generated, the more power produced.

“It all depends on the hitter,” Savacool said. “If your hands are fast, you might want the two-piece. The barrel falls behind so when you come through, the barrel drags and then whips forward. You got a little more flex. … If you have regular or average hands, the one-piece is probably the better option.”

Tim Locastro ’13 played for the South Hill squad from 2010 to 2013. He is currently playing for the Los Angeles Dodgers Double-A affiliate Tulsa Drillers.

Locastro said that during his freshman year for the Bombers, in 2010, he used a bat produced by Easton, which made its first aluminum bat in 1972. His sophomore year, Locastro switched to a Marucci Cat 5, which he used through his junior year until he chose to forgo his senior season when he signed with the Toronto Blue Jays. He was drafted by the organization in the 13th round of the Major League Baseball Draft in 2013.

He said he made the switch to be more comfortable because the Easton is a two-piece bat.

During the summers of 2011 and 2012, Locastro played in the New York Collegiate Baseball League for the Syracuse Jr. Chiefs. A developmental league for professional baseball players, the NYCBL uses exclusively wooden bats. Locastro said he mostly swung Old Hickory — established in 1999 — and Marucci — established in 2002 — wooden bats.

In addition, Locastro and his teammates used Baum Bats during fall off–season play and practice. This brand of bat is also wooden; however, it contains a metal rod inside that prevents the bat from splitting.

Locastro said the transition from metal bats in college to wooden bats in the minor leagues was not that challenging.

Throughout his three years at the college, he said he used between four to six different types of metal bats and three to four brands of wooden bats.

While he said four to six types of metal bats was the mean number used by a college baseball player during a season, Locastro also said players would easily stray away from this average.

Locastro also said superstition plays a major factor into the sum of bats used by college players. He said that if one teammate – roping base hit after base hit with one bat – that bat would be passed down the lineup from player to player.

“We usually use the same bats because if one person got a hit, [we] would be superstitious and just think that bat had all the hits in it,” he said.

Baseball goes two-for-three on the road against Elmira College

Baseball loses on the road to SUNY Brockport 7–3