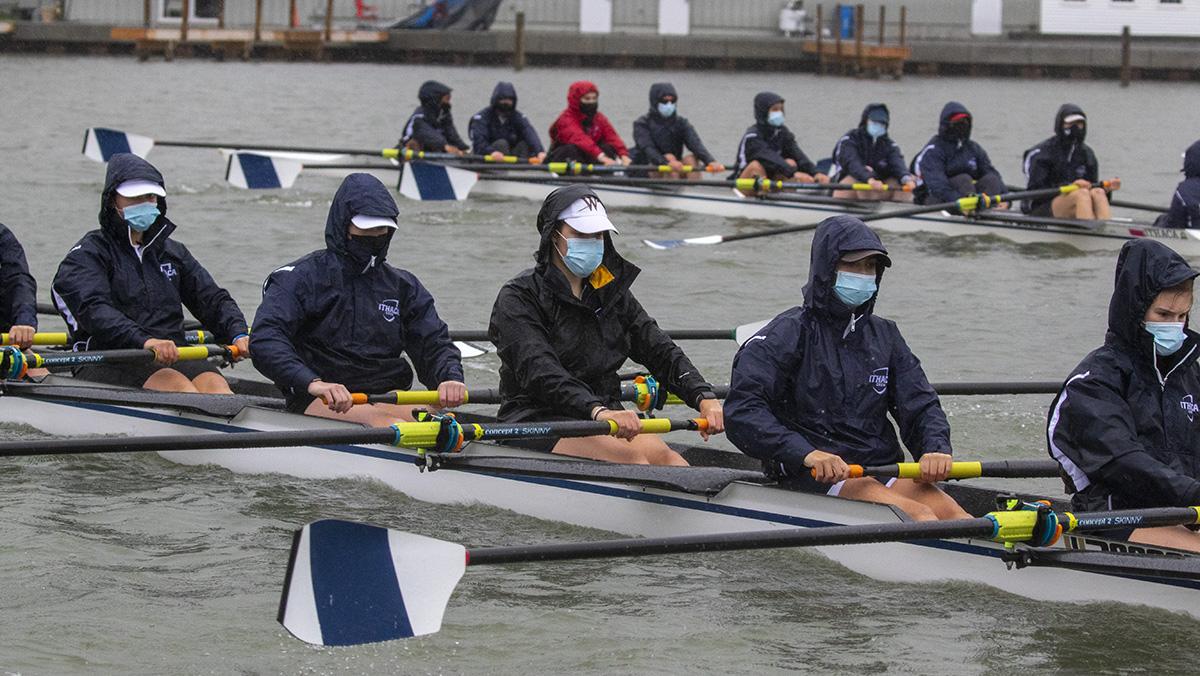 Abbey London/The Ithacan
Rowers Zoe Foster, Taylor Volmrich and Wesley Hoglin have taken their talents from the Utah Crew program to the Bombers.
By Jack Murray — Senior writer
Published: May 6, 2021

For three athletes in the Ithaca College rowing program, the tame and controlled conditions of Cayuga Lake differ greatly from their rowing origins on the Jordan River in Utah, over 2,000 miles west of South Hill.

The Ithaca College rowing teams typically look to recruit from regional areas with a rich tradition in the sport, like Massachusetts, Connecticut and New York. However, junior Zoe Foster, sophomore Taylor Volmrich and freshman Wesley Hoglin broke this trend, with all three being from Utah. Foster is from Salt Lake City, and Volmrich and Hoglin are from nearby Park City. All three rowers have connections to the Utah Crew program, a nonprofit rowing organization that provides 13–18-year-olds in Northern Utah with recreational or competitive rowing opportunities.

“Utah is a location where there’s this pocket of a couple high school rowing programs and there aren’t that many colleges nearby,” Robinson said. “So, having a connection to these clubs is really great because if those high schoolers want to row in college, they really need to look beyond staying close to home.”

Foster was the first of the trio to enroll at the college, but her journey began with disappointment. Throughout high school, Foster served as a rower within the boat. Foster, who has Marfan Syndrome —a genetic disorder that affects the connective tissue and causes overly flexible joints —was not cleared to row at the collegiate level. This led to her pursuing the role of a coxswain, which does not involve any rowing but instead requires providing directions and guiding the boat. Foster was able to find a spot with the Bombers and took it.

“I started reaching out to the schools that I had gotten accepted to about their rowing programs and reached out to [men’s rowing head coach Dan Robinson] about coxing for their men’s team, and he completely just took me in,” Foster said. “I finished my high school senior year out rowing and coxing, but once I got here and made the full transition into coxing.”

Volmrich headed to South Hill the next year after looking into rowing at both the Division I and Division III levels, and ultimately decided to commit to the Bombers when Foster put her in contact with Robinson during the 2019 crew season.

“One of the big deciding factors was actually when Zoe was … with [Becky Robinson] in Georgia on the team’s spring training trip,” Volmrich said. “Becky said to Zoe, ‘Well Taylor could go to a Division I school and sit in the [fifth varsity boat] … or she could come to Ithaca, and I could make her an NCAA champion.’”

Hoglin heard about the college from a conversation with Volmrich and said their discussion sparked the idea of coming to South Hill.

“I first heard about Ithaca from Taylor because we went to high school together and we actually were in the same weightlifting class,” Hoglin said. “She told me about Ithaca and she held it in high praise. She was the first one to plant the seed in my head.”

Both Foster and Hoglin knew of Volmrich prior to enrolling at the college but were not introduced to each other until they were both at the college in January. This was because Hoglin did not join the Utah Crew program until his junior year of high school, when Foster was a freshman for the Bombers.

Volmrich said that one fun aspect of having teammates from the same area is seeing recognizable apparel from their former program around the Bomber’s facilities.

“We all have Utah Crew gear that I’ll see at the boathouse or we will be out on the water and passing each other’s boats and I can see Wes wearing the red jacket for Utah Crew,” Volmrich said. “That’s a really fun connection to have. Wearing our Utah Crew visors and knowing that we come from a common background, and we’ve all come here now to continue growing at college is really cool.”

Hoglin said having teammates from his general area, especially when his home is across the country, made his transition to the college easier.

“Being able to talk to someone and having them know where I’m coming from is very comforting,” Hoglin said. “Just being able to have someone like that to confide in is very helpful.”

Volmrich said having teammates who have the same background as herself shows how the sport is developing in Utah.

“I think that being able to appreciate that and also understand how hard some people have it, to get access to rowing, is a good way to round out the experience,” Volmrich said. “I had to be really dedicated to the sport to drive 45 minutes and then drive 45 minutes home six days a week, and spend that money on gas. Now, being five minutes from the boathouse is a really good experience and I’m really grateful for it.”