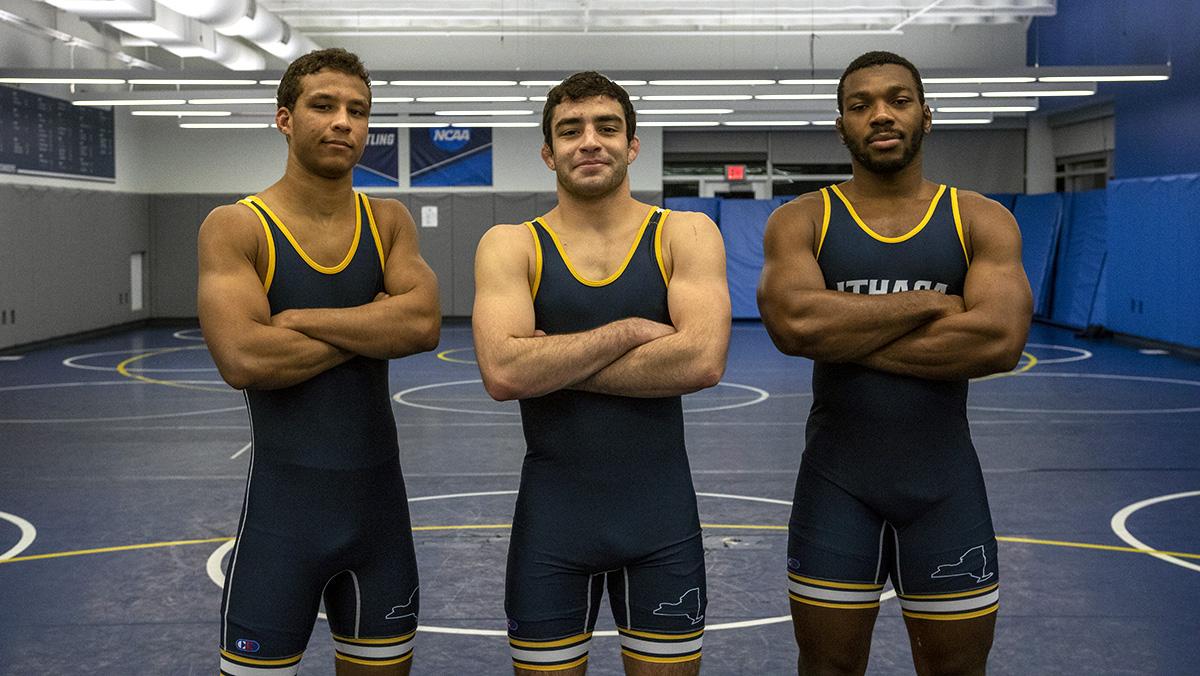 As the Ithaca College wrestling team wrapped up the first half of the season, three members of the wrestling team brought home first place at the New York State Championships.

Chukwuezi’s 2019 title came at a weight of 184 pounds, 13 pounds lighter than his weight class in this tournament. The senior won the 197-pound title and said this tournament helped him improve his competitive mindset.

“Coming out ready to wrestle in all three periods instead of waiting a little bit until the third or the second to really turn it on,” Chukwuezi said. “I feel like if I turned it on earlier then a lot of those matches wouldn’t be as close as they were.”

Chukwuezi said it helped that he did not have to go through the feeling of a break between periods, and he is happy that his hard work during the offseason has paid off quickly. He added that the biggest area of improvement for him thus far is going into each match with an organized approach and a well-structured game plan.

“I don’t think I’m the most technical wrestler in the country but I know that I [have a better] game plan than anyone in the country,” Chukwuezi said. “Just knowing to have an executed plan, not making mistakes, not letting the guy take me down and picking my shots wisely going into matches, I know I’m just in a much better spot than anyone else I compete with.”

As Jones brought home the first place title in the 141-pound bracket, he said he worked to keep his composure throughout his matches. In his preparation, he also attempted not to over-train and to maintain his focus.

“For me personally, I get super nervous before almost every one of my matches,” Jones said. “I just have to clear my head and basically just pep-talk myself the whole time.”

Beyer won his first career New York State Championship that weekend, competing in the 149-pound weight class. He said he is confident that the first place accolade sets a good tone for himself and the rest of the team going forward with the rest of the season.

“We have a good, put together team right now, and a team that’s looking to win titles later in the season,” Beyer said. “So it’s nice to have like a few tournament wins behind it, so now we can really go and just continue to build on it.”

The wrestlers also had a lot of praise for head coach Marty Nichols, who is currently in his 26th season with the Bombers. Chukwuezi said Nichols adds a lot of strategy to each close match, noting that he is very good at studying the flow of the match and knows exactly what to do in crucial moments.

“Mid-match he’ll tell you to make certain adjustments that help you get a last minute takedown,” Chukwuezi said. “So a lot of game planning and then in the room, making sure we have all the technical situations down and making sure that we know what we’re doing on that.”

Jones said he loves how Nichols holds the team accountable for what it needs to do once his practice is over, like hopping on a stationary bike to make weight for the next match or nursing an injury with physical rehab. Jones is also pleased with the coach’s ability to make sure everyone is prepared mentally for the upcoming match, whenever someone does not feel confident.

“He structures practice in a way where he’s like ‘This is the bare minimum which you need and everything else you know, like do what you’ve got to do,’ and he leaves the room for everyone to do what they need to do,” Jones said. “He’s a great resource that helps us prepare and also perform like at the tournament. He’s in our corner and you know he’s letting us know what to do.”

Beyer said his progression as a wrestler was aided by how Nichols and the rest of the coaching staff have helped him improve in tactical areas of his matches that he struggled within the past.

“​​Coach Nichols has been focusing on a lot of different positions with me this season,” Beyer said. “Stuff that I used to make mistakes within the past made huge improvements with now, especially on my feet and the neutral position and a lot of my hand fighting. Me and coach have been going over a lot of different things, as well as coach Ricardo, coach Daffinee and coach Israel. So, all of them really played a big role in helping me figure out a good game plan every time I go out there.”

Jones said there are technical aspects of wrestling that he learned, which he believes will benefit him for the second half of the season after wrestling four matches in the tournament.

“That experience of knowing during the match what worked and what didn’t work and what I need to work on,” Jones said. “For me, there was a little weakness that was exploited and now we’re working on it. So definitely having that experience is super useful and I’m glad that it happened now so that won’t be to my detriment at the big show at nationals.”

With the winter break approaching, the Bombers will have the next month off to prepare for their next tournament, beginning at 9 a.m. Jan. 7 at the Budd Whitehill National Duals at Lycoming in Williamsport, Pennsylvania.