Track and Field competes in Bomber Invitational and Multi 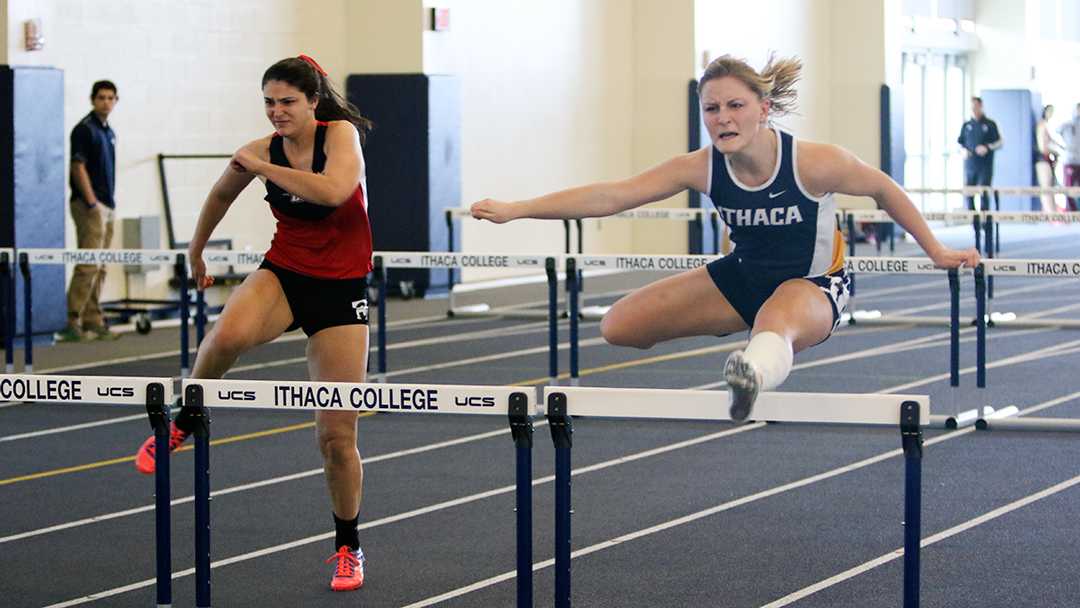 ALEXIS LIBERATORE/ THE ITHACAN
Sophomore Megan Tinklepaugh competes in the 60-meter hurdles during the Bomber Invitational and Multi Feb. 6. She placed 16th with a time of 10.21 seconds.
By Tatiana Garvin — Contributing Writer
Published: February 9, 2016

With the Empire 8 Championship only a week away, the men’s and women’s indoor track teams competed Feb. 6 and 7 in the Ithaca College Bomber Invitational and Multi in Glazer Arena.

Andrew Brandt, senior captain of the men’s team, said that overall the team did well and the invitational set them up well for the rest of their season.

“As a team, I think we performed really well this weekend. We had a lot of really good performances and personal records,” Brandt said. “From where we are in the season, going forward it’s a really good sign that we are going to be able to come out for E8’s, states and hopefully ECACs and make them work. Hoping to do well, winning a couple of championships.”

The men’s team had a total of six people this past weekend who qualified for the Eastern College Athletic Conference.

Matthias also qualified for ECACs in the 200-meter dash with a time of 22.50.

Junior Sean Phillips finished the mile in second place, qualifying for ECACs with a time of 4:20.04.

McGowan said although they did well there is always room for improvement.

“Although we qualified for ECACs, we felt we could’ve ran a cleaner race,” McGowan said. “Hopefully next weekend we will sharpen up our hand offs, get the baton all the way around the track quickly and efficiently and finish off running with a good time.”

Senior Larkin Bohanan took fifth in the 1,000-meter run, setting a time of 2:34.52, which qualified him for ECACs.

Taking second place in the 3,000-meter run, senior Sawyer Hitchcock qualified for ECACs with a time of 8:48.17.

Junior Andrew Ward was sixth overall in the 60-meter hurdle prelims with a time of 8.95 seconds. Another junior on the team, Jesse Capellaro, earned seventh place in the 3,000-meter run with a time of 9:00.16.

The women’s track and field team also had a solid weekend at the the college’s Bomber Invitational.

Junior Brandy Smith set a new facility record in shot put with a toss of 13.31 meters. Smith topped the rest of the field on her way to meeting ECAC standards.

Smith also set the facility record in weight throw with a measurement of 17.83 meters to finish first in the competition.

Senior Kristen Pompey placed second in the finals of the women’s shot put, reaching 9.33 meters. Sophomore Brianna Hayes placed first in the women’s 800-meter indoor run with a time of 2:34.56.

Both teams will compete in the Empire 8 Championships at 10 a.m. Feb. 13 in Glazer Arena.

Men’s track and field head coach Jim Nichols said the squad will be extra focused for next week’s meet.

“I think the boys will be motivated because they didn’t win it last year, so that’ll be exciting to try and regain the conference championship; that is what we will probably be looking for,” Nichols said.