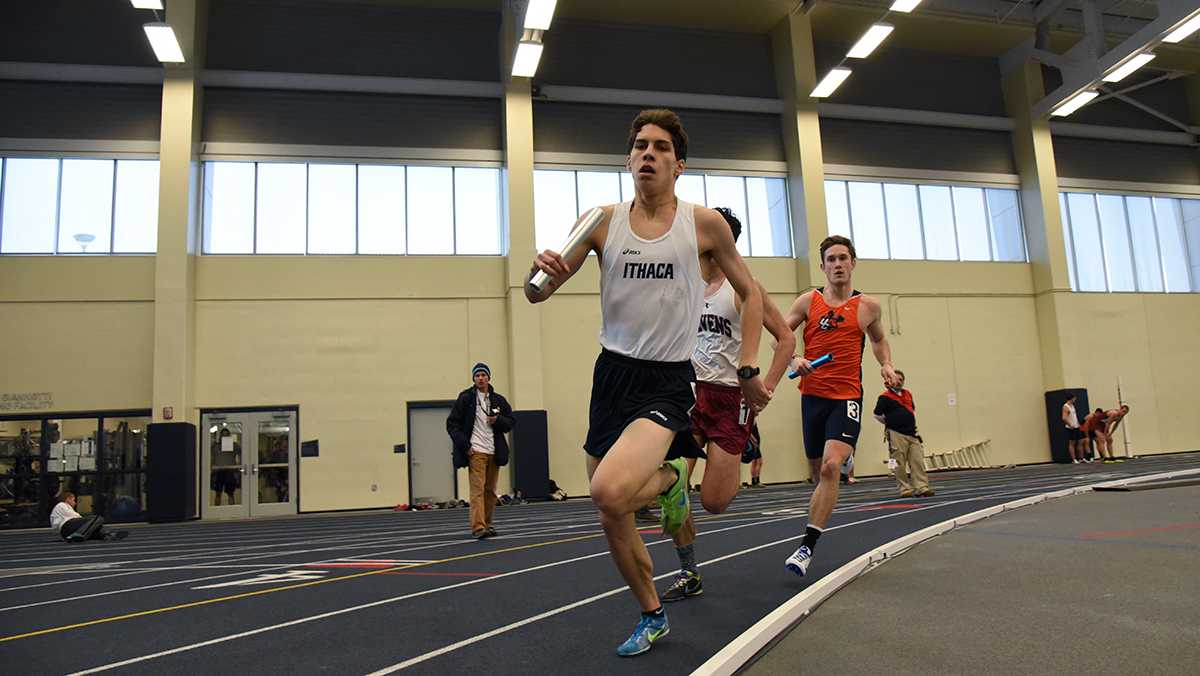 Both the men’s and women’s track and field squads walked onto the rubberized surface of Glazer Arena Feb. 13 with a rich history in the Empire 8 Conference Indoor Track & Field Championships.

The trend of dominance would persist as the Bombers swept the field, with the men and women winning with scores of 121 and 248, respectively.

Senior captain Alex Rechen said she was proud of how both teams came together to compete at a high level.

“I really like the support we all had for each other,” Rechen said. “We knew this was going to be a more competitive meet than we’ve had in the past.”

The Ithaca College women’s team opened up the competition with victory in the 20 lbs weight throw. Junior Brandy Smith, who earned Female Field Athlete of the Meet, set the facility record with a toss that measured at 18.28 meters.

Smith would also snag first place in shot-put with a distance of 12.79 meters while qualifying for Eastern College Athletic Conference standards.

Senior Andrew Brandt would follow up with a win in the high jump, leaping past the field with a jump of 2.03 meters to meet ECAC qualifications.

The men’s distance medley relay A squad, composed of seniors Larkin Bohanan and John Fausold as well as juniors Chris Gutierrez and Sean Phillips, took home the gold with their ECAC-qualifying time of 10:34.70.

On the flip side, sophomore Taryn Cordani topped Stevens freshman Mary Visca in the 1 mile run when she clocked in at 5:03.64 to qualify for ECAC’s.

In the 60-meter hurdles, sophomore Amber Edwards and freshman Gianna Folz finished in the top two with their times of 9.18 and 9.56, respectively. Edwards met ECAC standards with her time.

Senior Sarah Werner earned the victory in the 60-meter dash with her ECAC-qualifying time of 7.88.

Junior Eliza Dewart, winner of the Female Track Athlete of the Meet award, and Werner finished first and second, respectively, in the 200-meter dash their times of 26.23 and 26.61. Dewart met ECAC qualifications with her top time.

Senior Sawyer Hitchcock set the facility record for the 5,000-meter run with his first-place time of 15:11.92.

The Blue and Gold’s last two victories came in the 4×200-meter relay exhibition when they swept the event.

The men’s A squad, composed of sophomores Jordan Wohlfeld and Anthony Zagorsky and freshmen Aaron Smith and Kevin Toal, slipped past Houghton College Highlanders by six one-hundredths of a second with a time of 1:37.40.

For the women, both the A and B squads duked it out in the event. The A squad of freshmen Jordan Beckley, Ashley Hilliker and Cortlyn Raynes along with junior Rose Paskoff won with a time of 2:00.09.

Not only did the Bombers celebrate another Empire 8 championship, but they also celebrated the seniors from both squads as it was their second-to-last home meet for the Blue and Gold before the New York State Collegiate Track Conference Championships Feb. 26 and 27.

Rechen said the seniors from both squads performed tremendously at the meet.

“From what I saw, a lot of people had personal records or won events, so it was really great for all of us,” Rechen said. “We had a ceremony at the end, some of us were getting a little bit emotional, but we love and support this team so much.”

The men’s and women’s squads will carry their titles into the Golden Eagle Invitational meet at 10 a.m. Feb. 20 at SUNY Brockport in the Special Events Recreation Center.