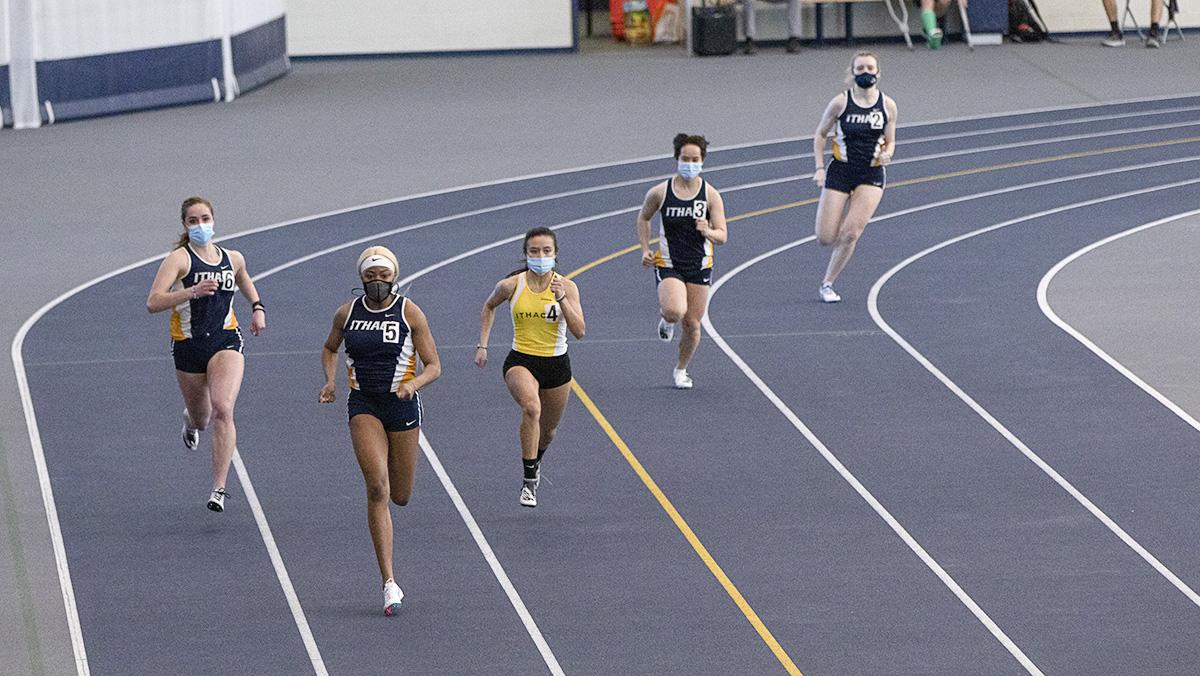 The Ithaca College men’s and women’s indoor track and field teams held their second intrasquad meet of the season Feb. 27 in Glazer Arena at the Athletics and Events Center. This meet only included members of the team and will not count toward any league or NCAA records.

The meet began with both teams competing in the 55-meter hurdles. On the men’s side of the action, Monchek won the event with a time of 7.70 seconds. Bruce notched the victory on the women’s team, as she recorded a time of 8.50 seconds.

Freshman Jalen Leonard-Osbourne then came away with a victory in the men’s 55-meter dash, finishing at 6.40 seconds. He was closely followed by junior Matt Tai and freshman Sam Panzer, who tied for second place at 6.70 seconds. In the women’s event, freshman Katarina Gomez placed first in just 7.40 seconds. Sophomore Sara Brown finished shortly after Gomez, with a 7.50-second race.

Gomez secured her second victory of the afternoon in the 400-meter run, as she completed the race in just 58.90 seconds. Junior Katelyn Hutchison followed in second place with a time of 59.20 seconds. In the men’s portion, sophomore Nate Oczkowski placed first in just 51.20 seconds. Senior Zach Woodruff was next to finish at 53.60 seconds.

Sophomore Rachel Rose won the women’s one-mile run event with a time of 5:31.70 minutes. Sophomore Julia Tomanovich finished just behind Rose at 5:32.10 minutes. Senior Joshua Endy secured a victory on the men’s side with a 4:25.30–minute mile. Senior Alec Hofer recorded a second–place finish at 4:42.10 minutes.

First-year graduate student Maggie Nickerson picked up a victory in the 800-meter run, finishing the event in just 2:19.40 minutes. Junior Lauren Lobdell finished just after Nickerson at 2:19.90. On the men’s side, freshman Conor Ryan edged out freshman Jonathan Sadanaga for first place with a time of 2:02, compared to Sadanaga’s 2:04 time.

Sophomore Andy Frank won the men’s 200-meter dash, finishing first in just 22.00 seconds. Freshman Aaron Davis came in second and completed the event in 23.30 seconds. Senior Sydney Strelec finished in first place in the event for the women’s squad with a time of 28.60 seconds. Sophomore Ayenaliz Velasquez finished the race in 29.40 seconds, notching a second-place finish.

The women’s team had an impressive display in the 4×200 meter relay, as senior Molly Sear, freshman Pearl Hettich, freshman Ashanti Stanley and freshman Izzy Lambert finished the race with a time of 1:58.80. The men’s squad also had a solid showing, as the team of Tai, Frank and Panzer ran a 1:36.70 race.

The women’s team kept rolling in the 4×400 meter relay, as the team of graduate student Lindsay Scott, junior Paloma De Monte, Lobdell and Rose won the race in 4:13.10. Lange, Ryan, sophomore Ryan Medeiros and junior Ryan Bieber finished at 3:44.60 and took home first place on the men’s side.

The Bombers continued their impressive showing in the field events. Monchek took home his second victory of the day in the men’s long jump, as he jumped 6.6 meters. Freshman Spenc Whitmore and Davis also made their marks in the event, posting jumps of 6.55 meters and 6.45 meters, respectively. In the women’s event, Logan recorded her second victory of the day with a jump of 5.71 meters.

Senior Ari Bernard won the shot put for the women’s team, recording a throw of 12.80 meters. Junior Justin Showstead picked up the victory on the men’s team, with a recorded throw of 12.48 meters.

Logan’s third victory of the day was in the high jump, as she won the women’s event with a jump of 1.60 meters.

Junior Dominic Mikula finished in first place for the men’s pole vault, achieving a clearance of 5.06 meters and beating the college’s record of 5.00 meters that he set last year. However, it does not count toward the school standard because there were no official judges at the scrimmage. Junior Meghan Matheny came away with the victory in the pole vault for the women’s team, as she cleared 3.4 meters.

Bernard placed first in the weight throw for the women’s team, with a throw of 15.32 meters. Junior Luke Tobia notched a victory for the event on the men’s side of competition, recording a throw of 17.82 meters.