Track teams brace themselves for the great outdoors 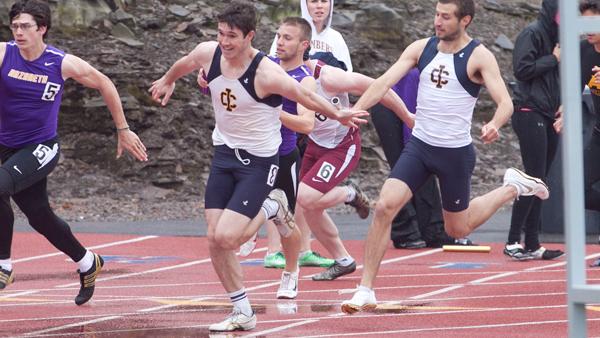 As the indoor season comes to a close, the Bombers men’s and women’s track and field teams are getting ready to turn things inside out and begin their outdoor season. The next scheduled meet will be at Butterfield Stadium on March 30.

This transition is easier said than done. There are many differences between competing indoor and outdoor. The biggest challenge that the teams will be facing, according to women’s Head Coach Jennifer Potter, is the weather. If it doesn’t cooperate, then they will be running into some problems not only with where they will be racing but also qualifying for other meets.

“That is the hardest transition,” she said. “You can only qualify for Nationals outdoors, and if the weather doesn’t cooperate we could lose meets or not have favorable conditions for things like sprints.”

The track is also a factor in the transition, because it is bigger outdoors than it is indoors, going from 200-meter laps to 400-meter laps. This, freshman sprinter Alex Schneider said, will be something that the athletes will have to adjust to.

“It’s a different track, you have to stretch yourself out,” he said. “You have to adapt to running longer distances, and most of the events are longer.”

While those two changes may be the biggest challenges, another thing that will be altered is the way they train. Freshman Tina Gibble said because the team is beginning to peak strength-wise, now what they have to do is build on that and keep up what they are doing.

“The indoor season is more intense and strengthening, while outdoor always seems to be more maintenance of that strengthening,” she said. “Training is still hard, but it may not seem that way because we are becoming more tolerant to the workouts.”

Now that they have reached their peak physically, the work is not done. One way to take strides and continue to get better is to work out the kinks and the little things that they haven’t quite gotten down this year. Gibble said technical things like form, footwork, handoffs and other things will be focused on during the upcoming practices.

“Training also seems to be more about technique than strengthening,” she said. “Since the track is longer, we tend to practice running longer distances. For example, the hurdlers have to adjust from running 60 meters indoors to either 110 or 400 meters outdoors.”

Both squads have done well this year. Both brought home conference and state titles as well as the women winning the ECAC Indoor Championship. They look to continue this trend outside. Historically the Bombers are better outdoors than indoors, and Potter said the teams’ success and the time off for spring break made them better.

“We always do better outdoors, because it is the continuation of our training,” she said. “The momentum will continue, and they will get a much needed break, which will be a good time to refresh and rejuvenate.”

The Bombers are entering a phase of the season that Gibble said is important in achieving postseason success.

“Coach describes us as a postseason team, so we are all about States, ECACs and Nationals,” she said. “Spring practices are more about making it to those meets and doing well.”

Now that they took States for the first time in 12 years, the men have more confidence to go outside and do it again. This success has helped them raise the bar, and Schneider said they will be determined to keep up the success.

“We definitely think we can come out and win again outdoors, and we have high standards for ourselves now,” he said. “Coach Nichols always says that we are a better outdoor team than indoor team, so I wouldn’t say that it is an expectation that we win again, but we really want to win.”