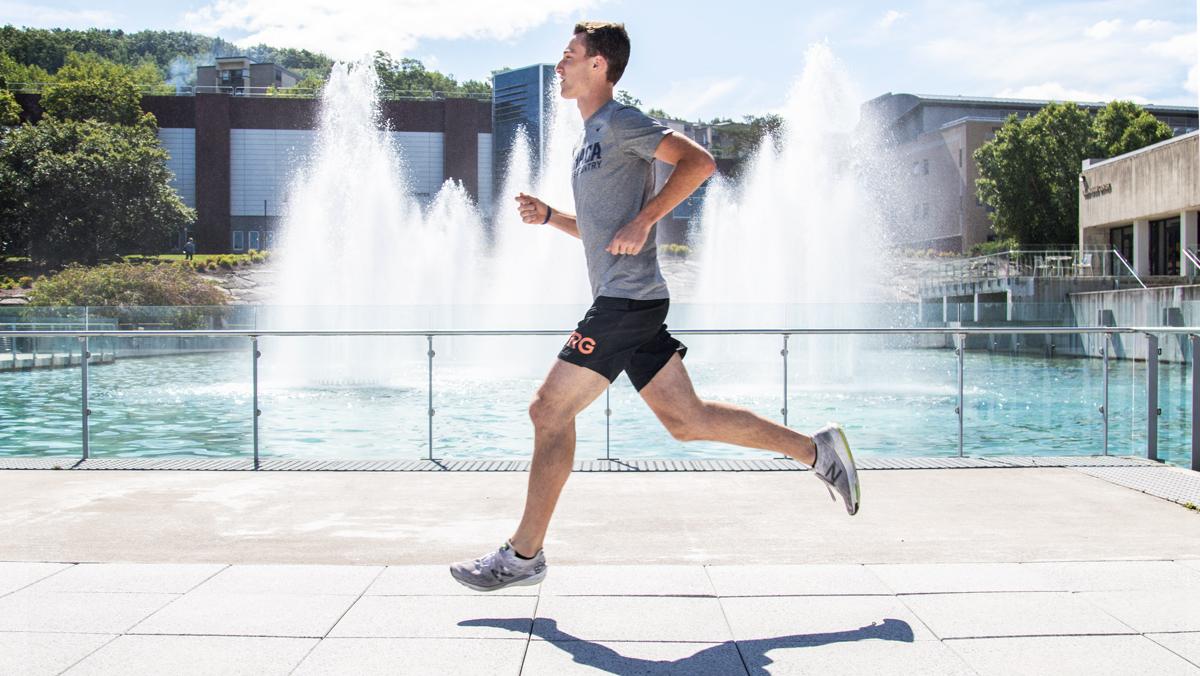 Peter Raider/The Ithacan
Sophomore runner Zach Wachs is from Ardsley, New York, and he said he transferred to Ithaca College from the University of Kentucky so that he could be closer to his family.
By Connor Wood — Contributing Writer
Published: September 11, 2019

Many high school athletes dream about landing a roster spot at a top-tier Division I program, and sophomore runner Zach Wachs achieved that goal. However, Wachs only spent a year at the University of Kentucky before transferring to Division III Ithaca College.

Wachs began running during his freshman year of high school in Ardsley, New York, and racked up plenty of accolades throughout his high school career. Wachs was the Section 1 Class B 800-meter run champion in 2017 in which he ran his personal best time of 1:56:64. At the 2018 New York State Public High School Athletic Association Track and Field Championships, he was a part of the 4×100-meter relay that finished third. He also competed in the 800-meter Emerging Elite race at the 2018 New Balance Indoor Nationals.

“I picked Kentucky because of its distance coach,” Wachs said. “It was the closest SEC school to my home, and it was an opportunity for me to be part of a nationally recognized track and field program.”

Wachs competed in two indoor and two outdoor track and field meets during his freshman season at Kentucky. He achieved a season-best 800-meter time of 1:58:86 at the Kentucky Track and Field Invitational on April 20.

Though he was running at the highest level, Wachs said he struggled with being so far from home. He said the trip from his hometown to Kentucky took approximately 14 hours.

“I’m a family guy,” Wachs said. “I’m the oldest of five kids. I wanted to have the ability to drive home and see them on a free weekend or have them watch me compete in track meets near them. I feel that I have a responsibility as the eldest in my family to care for them and be by their side as much as possible.”

“I wanted a major that put me more in touch with patients,” Wachs said. “At Kentucky, there was less hands-on experience and less opportunities because of how big the school is. [Ithaca] had such a good exercise science program that it was hard not to look here.”

When he began looking into transferring, Wachs connected with the Bombers through his younger brother, Jacob, who is being recruited by the tennis team. When Jacob visited campus in the spring, Wachs said his brother called him and said he thought it would be the perfect place for Wachs to pursue both his academic and athletic dreams.

Jim Nichols, men’s cross-country and track and field head coach, said he was excited to see an athlete of Wachs’ caliber express interest in the college’s track program.

Wachs’ teammate sophomore Danny Jagoe said he is excited to see how Wachs can perform with the South Hill squad, and he respects Wachs’ competitive attitude.

“When we are doing workouts, he won’t complain,” Jagoe said. “He’ll just do it. When it’s a really tough day, he’ll just stick through it.”

Wachs said he plans to live by a three-word mantra for this season: healthy, happy and fast.

Wachs said that although the college is Division III, he still feels challenged training with the team.

“All the guys here run wicked fast times,” Wachs said. “I’m not walking into an easy, piece-of-cake kind of place.”

At the Hamilton College Short Course Invitational on Sept. 7, Wachs was the eighth finisher for the squad with a time 16:21.5. Wachs said he is excited to begin his journey at the college.

“I’m more than happy to be part of the community,” Wachs said. “I thank Coach Nichols and the team for giving me this opportunity.”