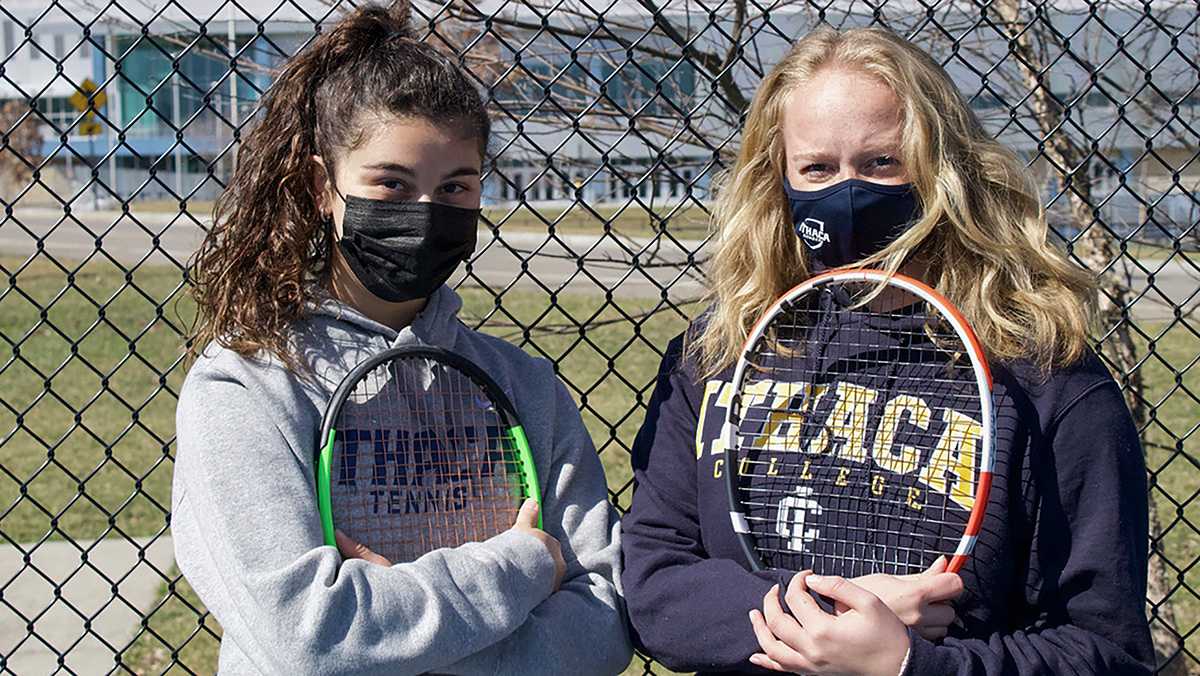 Hannah Wilkinson/The Ithacan
Sposito and Stefanski are back together on the same team after achieving new heights for the women's tennis team at North Pocono High School.
By Jack Murray — Senior writer
Published: April 7, 2021

When freshman tennis player Ally Stefanski was in high school, sophomore Sarah Sposito was consistently a player who inspired her to improve her game. This season, the two have reunited as teammates on the Ithaca College women’s tennis team.

In Fall 2016, the pair stepped onto the tennis court as teammates for the first time at North Pocono High School in Covington Township, Pennsylvania. Having schools that consistently send players to a particular college for a specific sport is not uncommon in the college athletic landscape. However, having two consecutive years with a new player from an out-of-state high school is a new development for the women’s tennis team, which currently has a roster of 12.

Head coach Chris Hayes said this is atypical for recruiting since when players who graduated from the same high school join the program, they are usually from the same family. The last time this happened was the 2010–11 season with sisters Melissa Nunez ’11 and Cristina Nunez ’13.

“I think it is an anomaly,” Hayes said. “It is more common with brothers and sisters who go to the same high school and play the same sport and then want to play together. ‘Spo’ and Ally’s situation does not come around often, not just in our sport, but in many sports.”

When recruiting athletes, Hayes said the academic reputation of the college is a huge selling point, and this was instrumental in bringing both Sposito and Stefanski to the college.

“I think a lot of it has to do with the prestige of the academics here,” Hayes said. “‘Spo’ is in the [Roy H. Park School of Communications] which is obviously outstanding, and Ally is in the [physical therapy] program, which speaks for itself as well. The number one reason you are coming here is because of the education, as there is life after graduation besides tennis.”

During her high school career, Sposito played at the varsity level for four seasons, won team MVP during her senior season, and was a part of the first doubles team in school history to advance to the state tournament. Stefanski statistically led the team after Sposito’s graduation and went on to be named a league all-star and had the best singles record on the team.

Sposito was deciding between the college and DePaul University in Chicago during her senior year of high school. Her high school coach, Hosiah Davis, reached out to former Ithaca tennis coach Bill Austin about Sposito, which led to Hayes recruiting her and eventually Sposito committing to the college.

Sposito said she was ecstatic to hear that Stefanski was considering the college and gave her a rundown on the academic and athletic culture on South Hill.

“When I heard that someone from home might be coming to Ithaca, I was really excited,” Sposito said. “When she told me, I talked [the college] up. I did really want her to come here and I am glad she picked it.”

Stefanski said her interest in the college was piqued by the physical therapy program, but knowing that Sposito was on the tennis team made her look into playing tennis at the college level.

“I wasn’t really sure if I was going to be playing on the tennis team or how rigorous it would be and was actually considering club tennis,” Stefanski said. “Sarah said that it takes a lot of time but that she loved it, and I decided to try out. I loved knowing Sarah because it definitely helped my nerves at the tryout.”

The last time the two were teammates at North Pocono, Sposito was the team’s captain. Earlier in their careers, Sposito was number two singles and eventually rose to top singles for the team. Stefanski, who later became a captain after Sposito graduated, said her rise up the depth chart was longer, but having Sposito ahead of her helped her learn the ropes and visualize a path toward success. Stefanski said that in this role, Sposito was kind, open and displayed all characteristics of a good leader.

With both of them being underclassmen at the college, Stefanski said the new dynamic is new, but also comforting.

“It’s different seeing her more on my level now because there’s other people leading both of us,” Stefanski said. “It’s nice to be on that level with her and have similar questions and problems.”

Sposito said Stefanski was always a reliable player in her high school’s lineup, especially in doubles play, and had a strong work ethic.

Sposito said playing with a familiar face and someone who shares her high school memories with her is a nice change from last season.

Senior Sara Steinberg, captain of the women’s tennis team, said the familiarity that Stefanski and Sposito have is noticeable both on and off of the court.

“I’ve noticed an extreme amount of chemistry,” Steinberg said. “I know the two get along really well and can predict each other’s movements.”

Hayes said recruiting from high schools that past and current athletes have come from is vital to the success of the program.

“You always need sources to go back to and dig up players,” Hayes said. “Developing pipelines is definitely important. The more connections you have, the more well-equipped you will be to succeed, like job searching.”