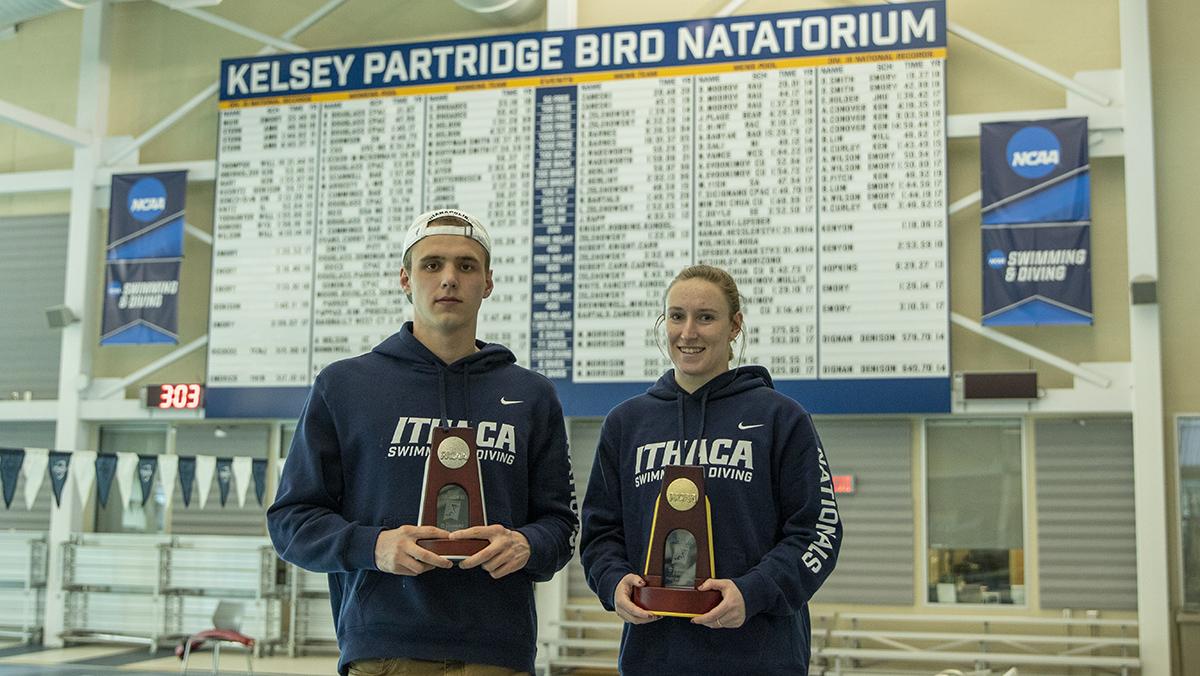 In a season to remember for the Ithaca College men’s and women’s swimming and diving teams, the programs capped–off the campaign at the Division III National Championships in Indianapolis, Indiana, on March 16–19, bringing a pair of national titles back to South Hill.

Both programs performed well and had strong individual performances. The women’s team placed 18th in the nation with a total of 43 points, led by a historic 3-meter diving win by graduate student Ava Lowell. On the men’s side, the team was led by sophomore Jack Wadsworth, who finished in the top three in all the events he participated in, and was crowned first in the 100-meter backstroke with a record-setting time of 46.45 seconds. Not only did it break the program and Liberty League records, but it also set an NCAA Division III record. The men’s team as a whole tallied 57 points to secure 18th place in the meet.

Lowell said she didn’t let the big stage of the national diving championships get to her. In fact, she felt that they were more relaxing compared to her regional meet experience.

“Regionals definitely felt more kind of serious,” Lowell said. “There was a lot of pressure, whereas nationals was a little bit more lighthearted and enjoyable. Mentally, I was just trying to go in with the idea of ‘this is just icing on the cake.’”

Lowell, who has posted six career All-American honors, said she treated nationals like any other one of her career meets. Lowell felt calm, yet determined to help her team in the contest because of her incredibly competitive nature. The 486.45 score she put up in the 3-meter dive made her the second Bomber to do it, behind Nickie Griesemer ’18 who won two national championships, the last in 2018.

“Physically we’ve been training really hard this whole year and put a lot of effort and work into our winter training,” Lowell said. “So it really was all about refinement.”

But after soaking in the win, Lowell felt both emotional and proud of her individual accomplishment. Also, because nationals were canceled as a result of the COVID-19 pandemic last year, Lowell said she felt this year’s nationals was her chance to finish her collegiate career on a high note.

“It’s pretty exciting and surreal,” Lowell said. “It really felt like a comeback year for me honestly.”

Chris Griffin, assistant aquatics coordinator and men’s and women’s diving coach, said he was also incredibly proud of the hard work that paid off for Lowell. He was not surprised by the results because of the mindset Lowell had going into the event, and added that the crowd’s and her team’s reaction to her last dive said it all.

“Once she hit her last dive, there was a moment of silence while everyone’s looking at the scoreboard waiting for the scores to come,” Griffin said. “It was just great to see her reaction, her teammate’s reactions, and just the celebration that occured.”

This positive energy is not just spread in the women’s swimming and diving program, it is also circulating the men’s program. Mike Blakely-Armitage, assistant coach for the men’s swimming and diving team, said he has noticed the huge impact Wadsworth has on the overall team chemistry. Blakely-Armitage thinks that Wadsworth’s high standards of success that comes from seasonal goals has trickled down to the team’s success.

“It’s always great to see a swimmer who has goals like he has,” Blakely-Armitage said. “He said at the beginning of the season during the recruiting process, that he wants to be a national champion.”

Wadsworth’s wishes were answered in only his first season on the team. By winning the 100-meter race for backstroke, he became the first individual Bomber national champion in men’s swimming since Colin Herlihy ’96 won twice in 1996. Wadsworth thought about the moment of winning the national championship before the season even started. Wadsworth made his aspirations a reality.

“I was just visualizing putting myself in that moment and running through all of the scenarios of what could happen,” Wadsworth said. “I did a lot of preparation mentally and visualization for this.”

Wadsworth said he also sees it important to envision himself in the water when he races, which is what he did before nationals. By picturing himself in that given moment, it makes Wadsworth feel as prepared as possible and makes his dreams come into fruition.

“I’m going to be in a different pool so I’m running myself through what the pool deck and what the water is going to feel like,” Wadsworth said. “Also, what it’s going to sound like.”

After Wadsworth finished the race and saw the scorekeeper put the results on the board, it took him a moment to feel what it was like to be a national champion. All of the years work, physical training, and especially the mental preparations before meets were rewarded in just one quick moment. Wadsworth said he was almost at a loss for words.

“When I first touched the wall, it took me 10 to 12 seconds to actually soak in the moment,” Wadsworth said. “It was pretty surreal.”

Blakely-Armitage has seen the hunger Wadsworth still has after all of his immediate success, and hopes to see Wadsworth continue that. He likes the way Wadsworth leads by example and how he puts his teammates first.

“He was going to be consistent in practice so that’s kind of the challenge moving forward is keeping athletes hungry once they’ve obtained something pretty good,” Blakely-Armitage said.

Blakely-Armitage said he wants to see Wadsworth reach his highest potential, and knows that even after a near–perfect debut season, Wadsworth has room to improve and grow. He said he understands the importance of slowly making each practice and training methods increasingly challenging.

“He’s not Superman,” Blakely-Armitage said. “He’s got some things we have to work on technique wise and in practice.”

Wadsworth may not be the Superman people watch on the screens but he’s certainly a leader of the men’s swimming and diving team. Blakely-Armitage is not taking it for granted coaching Wadsworth, a Bombers legend already in one year.

“Jack raises the bar of excellence,” Blakely-Armitage said. “It’s been amazing coaching him and helping him get to that level.”

Wadsworth also appreciates Blakely-Armitage and the way the entire coaching staff embraced him from day one. He said he believes the coaching staff has helped motivate him all year.

“I just have open communication with my coaches,” Wadsworth said. “We plan accordingly, we develop a process to have a plan set out and then you just stick to the daily things.”

Blakely-Armitage said he wants to ride the wave of recent success and sees a bright future in both programs. He is excited for the offseason and recruitment process as well, a time where new swimmers and divers can transition into the college.

“I think with recruiting on both the women’s and the men’s side, hopefully, we will have swimmers at the NCAA’s again because we want to be a presence at the national stage,” Blakely-Armitage said.