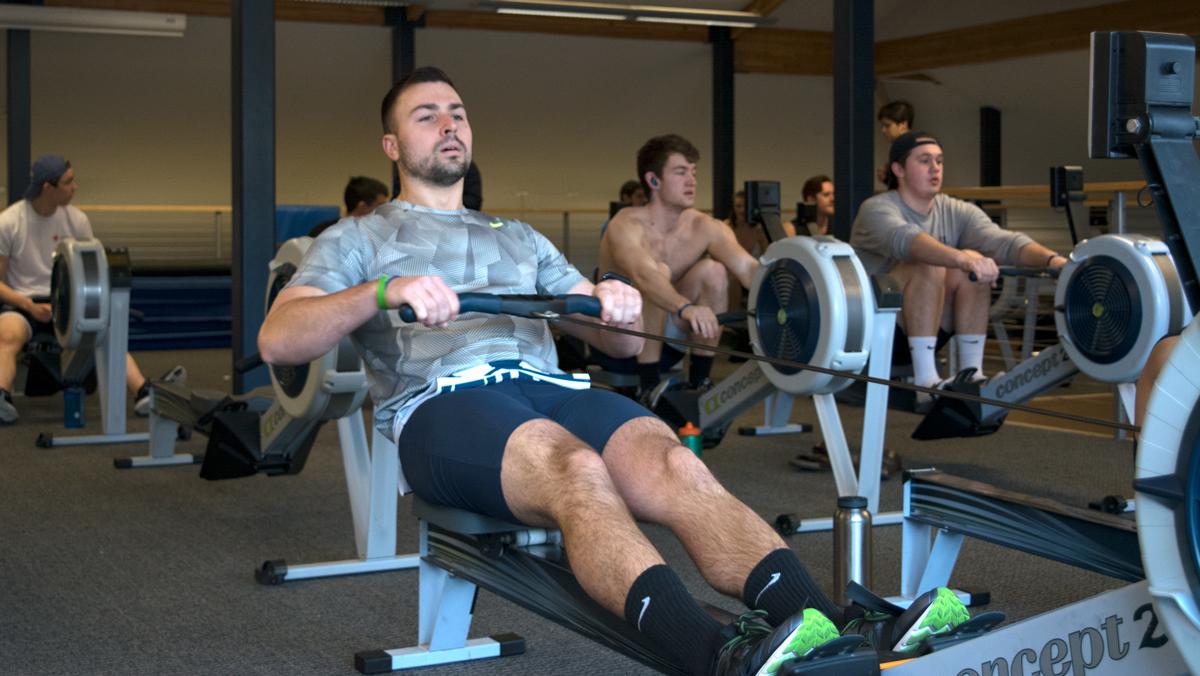 After a 12th-place finish at the National Invitational Rowing Championships, the Ithaca College men’s crew is looking to have a successful season in the Liberty League Conference.

“We really want to make a name for ourselves,” Cadoux said. “It is always tough competition, so we just want to have a really strong standout performance at Liberty League Championships, as well as overall state champs at the New York State Championships.”

Out of 32 men on the roster, 28 of them are underclassmen. Head coach Dan Robinson said his younger rowers grow of the season for the team to have success.

“It’s not a perfect situation,” Robinson said. “We rely a lot on our upperclassmen that we have for leadership, but otherwise the whole team is all freshmen and sophomores. As long as they keep improving, we’re going to be terrific.”

Robinson said that he wants to try to get more of the underclassmen to stick with rowing so that the team has a more balanced roster for the upcoming seasons.

“In the last couple of years, that hasn’t worked out so well because we only have two juniors and two seniors,” Robinson said. “I have got to look at guys individually and come up with the right things for them that will get them encouraged to stick with it.”

Cadoux said that he is excited about the underclassmen’s potential.

“We’re faster than last year, so getting faster with just freshmen and sophomores is a really cool thing,” Cadoux said. “Seeing that a couple years down the road, when those sophomores are now seniors, that’s going to be a powerhouse team. I’m excited in hopes of that transition coming true.”

Sophomore Andy McCabe said that everyone on the team has formed a close bond with one another and that it is a good thing for the future of the team.

“Since we are so underclassman-heavy, we want to make sure that the underclassmen stay with it and can build our team bigger and bigger,” McCabe said.

Robinson said that every season is a new season and that it is important to stay and live in the moment and to not think ahead all the time. He said the team should enjoy the experiences and bonding moments with the teammates and keep improving every day.

“I keep thinking about what is our best chance of coming out on top in these races,” Robinson said. “You can’t count on your opponent if you can’t play defense; you have to keep improving to stay in the moment.”

McCabe said the team’s big focus is building one another up constantly.

“Everyone in the boat has to have the same mentality; otherwise, you aren’t going to do as well,” McCabe said. I think we have done a very good job of working together as one unit.”

Not only is it the first time that the team will be competing for a conference title, but Ithaca College rowing is celebrating its 50th anniversary at 11 a.m. April 28–30 at the Cayuga Inlet.

“It’s the 50th year of Ithaca rowing, and we wear wristbands that say ‘50th armada,’ so we’re thinking about the legacy that we are carrying and the 49 years before us,” McCabe said.

Men’s crew will depend on new rowers