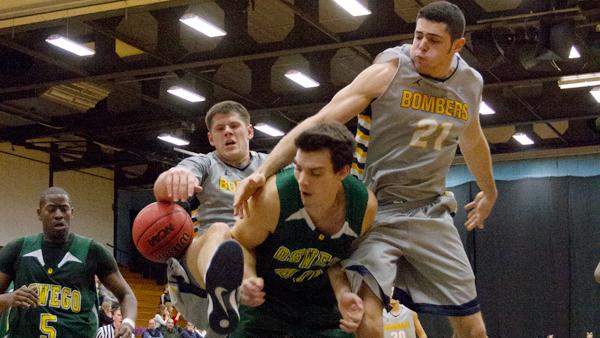 After leading the Empire 8 Conference in a 3-point field goal percentage and finishing second to last in points allowed last season, it was expected that outside shooting would be relied on to offset a weak defense for the men’s basketball team. Seven games into the season, the opposite is holding true for the Bombers.

The South Hill squad’s new emphasis on pressuring its opponents has improved the team to 3rd in the conference in steals, with the Bombers averaging nearly two more steals per game than it did for all of last season.

Senior guard Eli Maravich is one of four Bombers with 10 or more steals in the early part of the season. Maravich said while the team is going to keep attempting to improve its shooting percentages, it will continue to develop a defensive identity that involves pressure and physicality.

“We recently began pressuring a lot more, and we’ve seen a lot of success with that,” Maravich said. “It speeds up the game and helps our offense get easy buckets.”

Their defensive success is a noticeable contrast to their deflated 3-point shooting, which is just more than 26 percent. It is seven percentage points lower than the next lowest average of around 33 percent during the first six games of the 2008-09 season.

This is also nine percentage points lower than the 35 percent shooting percentage they had during the 2009-10 season, the rookie season of sharpshooting senior forward Andrei Oztemel. In that season, as well as the following two, Oztemel shot more than 40 percent from behind the arc. So far this season, Oztemel is shooting just over 28 percent from outside. His drop-off has Head Coach Jim Mullins “befuddled.”

“I have no explanation as to what’s going on with Andrei,” Mullins said. “He’s one of the best shooters I have ever coached, and he’s really struggling this year — and it’s not because of a lack effort. He’s practiced daily, putting up hundreds of shots, and I can’t see anything wrong with his stroke.”

Oztemel said that regardless of the slump, his experience gives him enough confidence to feel that he doesn’t need to work with Assistant Coach Jon Tanous on any major overhauls. He said he has to stay positive throughout this struggle.

“Shooting is a funny thing,” Oztemel said. “It’s mental, but at the same time there is a mechanical aspect. The mechanics are there, and I plan on getting the mental aspect resolved.”

Oztemel is second on the team in 3-point shooting, trailing Maravich who is shooting 50 percent. The Bombers are second-to-last in the Empire 8 in the category.

The Bombers have been trying to implement a motion-based offense to add variety to their offensive system. This offense is intended to create ball screens that make the offense less predictable as their possessions wear on. Oztemel said this new offense could help him break out of his struggles.

“I look at the new offense as an opportunity for me,” Oztemel said. “I’ve been scoring a lot more inside than I have in previous years. Versatility can only help since it’ll open up more shots for me on the outside.”

The Bombers are beginning to click offensively, as they shot a season-best 55.6 percent from the field in their 82-63 win against St. Lawrence on Tuesday. That performance is indicative of what the South Hill squad will have to do as it enters Empire 8 play. If the Blue and Gold fail to consistently repeat Tuesday night’s performance, they will have to continue to rely on their revamped defense that has earned them a 4–3 record thus far.