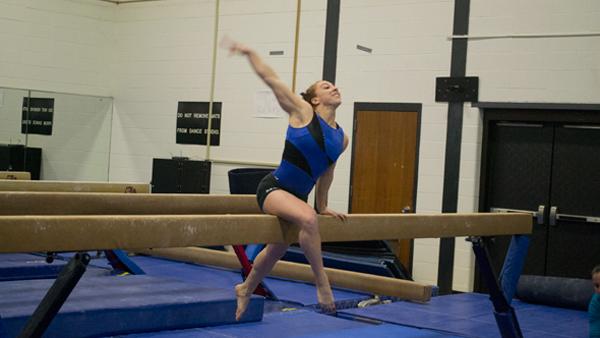 With two sidelined seasons plaguing her college career, Ithaca College Gymnastics co-captain and graduate student Tiffany Grube has been given a chance to relive her senior gymnastics season in 2013.

Grube began competing as a varsity gymnast in seventh grade after passing a maturity test and showing off her skills to the coaches of Lidenhurst High School. In her six years of competition, her success was well noted by the town, with six Most Valuable Player awards as well as the district’s Athlete of the Year award her senior year.

As her senior year began, Grube was not ready to leave gymnastics behind. While searching for colleges equipped with both physical therapy programs and gymnastics, Grube came across Ithaca College. Because her two primary interests could be pursued at the college, she scheduled a visit to learn more about the school as well as the gymnastics program.

Grube said after a day on the South Hill campus and a visit with Head Coach Rick Suddaby, she knew this college was the perfect fit.

“The team and coaches were so friendly,” she said. “I will never forget that the coach made my younger sister, who was four at the time, a fort to play in while we were watching practice, so it just seemed like the perfect fit for me and my family.”

During her senior year, Grube played in a playoff game for her high school lacrosse team and tore her anterior cruciate ligament. With necessary ACL surgery taking place that summer, Grube came to the college knowing she would not compete with the team but stayed strong, moved mats and provided all the support she could from the sidelines.

After a year of patiently waiting, Grube returned to competition her sophomore and junior years and did not waste any time getting back into the swing of things. Sophomore year, she qualified and competed in the National Collegiate Gymnastics Association Individual Championship as a vault competitor. The team did not make the national tournament, but Grube said competing as an individual was still a thrilling accomplishment for her after her injury.

“It was heartbreaking as a team to not make it, but it was exciting to see my comeback starting and how well I was doing in my rebuilding process after my surgery,” she said.

With two successful seasons under her belt, Grube entered her senior year preseason named co-captain of the Bombers. Just weeks before the start of the season, another nightmare occurred for the rising star. While training her newest vault routine, Grube landed awkwardly on the edge of the mat and broke her foot in two places, almost ending her entire season.

Junior Kate Woodward said Grube put her leadership duties before her injury and approached the 2012 season optimistically despite her physical limitations.

“She was upset when it first happened, but after it didn’t even seem like it fazed her because she put it aside and put everything into her team and teammates,” Woodward said. “She attended practice everyday, cheered for us the whole time, moved mats and was so supportive.”

When the team finished the 2012 season, Grube’s eligibility for 2013 was still in question. After a long wait, she was cleared for another season with the team. Soon after the preseason began, Grube was named co-captain again for the South Hill squad.

Graduate student Christine Niles said Grube’s success in competition and training so far this season makes her a force to be reckoned with for this seasons’ competitors and an inspiration for the team.

“To be able to come back from that injury and still be such an amazing competitor is awesome,” Niles said. “For her, I think she wants to prove herself after two seasons of injury, but I think she has proven herself already.”

Grube said her final season as a competitor is bittersweet. Leaving the sport will be difficult, but there is nothing more she would like to do than finish her college career as a gymnast with the Bombers.

“This season really does mean more than any other season,” she said. “It’s the culmination of everything I have worked for since I was 9 years old, and even though I was struck with injury a lot, I was so fortunate to make these memories.”