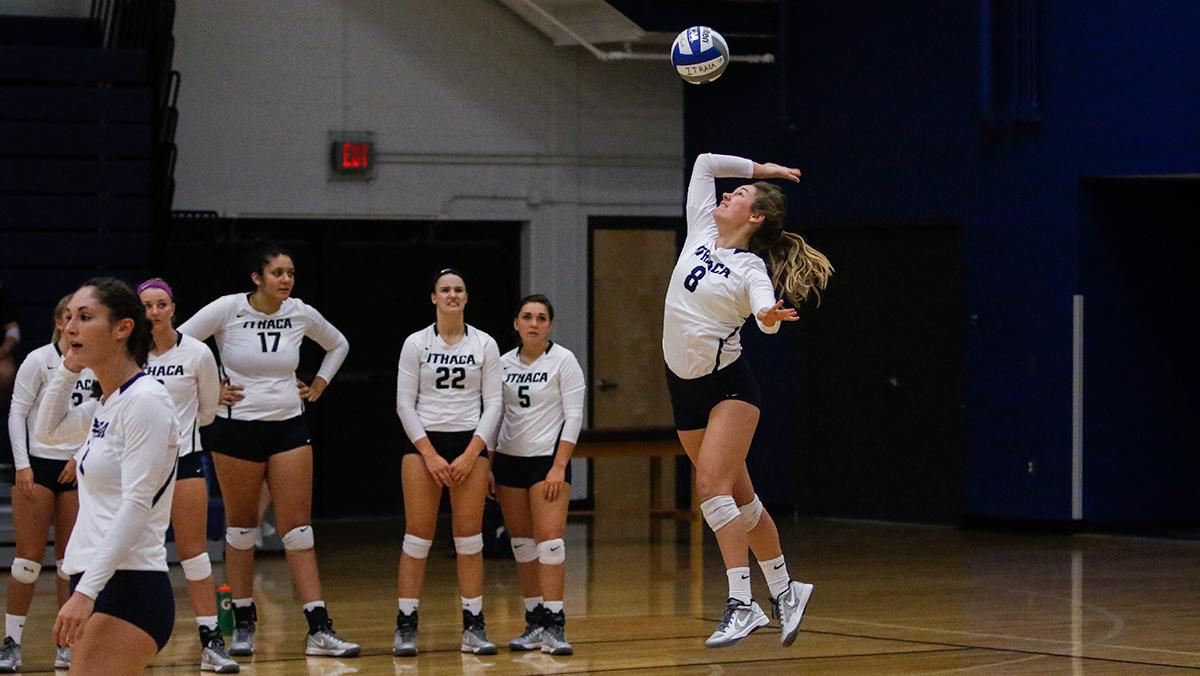 The Ithaca College volleyball team picked up its 11th win of the season as it defeated Elmira College 3–0 Sept. 21 in Ben Light Gymnasium. They are now 11–3 and undefeated at home.

In the first set, the South Hill squad took a 7–2 lead and never looked back. The Bombers won the set 25–12. Freshman outside hitter Taylor McCarthy led the team with six points in the set while sophomore middle hitter Amanda Cerruti lead the team with four kills.

The Blue and Gold maintained their momentum as they took a 13–4 lead to start the second set. The Bombers stretched this advantage to a 10 point differential with a 17–7 lead. They took the second set with a score of 25–12 to take a 2–0 lead in the match. After the second set, sophomore middle hitter Katie Evans led the team with 10.5 points and nine kills.

The Bombers looked to take the third set to complete the sweep. Elmira fought hard against the Bombers in a competitive set in which neither team could pull away early. Ithaca took a two-point lead, but Elmira tied the game at 12–12 and again at 16–16. The Blue and Gold scored five unanswered points to take a 21–16 lead. Elmira continued to fight, narrowing the gap to a 22–21 deficit. However, the Bombers persevered and won 25–23 to walk away with a win. Evans led the team with 14 points and 12 kills.

Evans said that accurate serving and passing led the team to victory.

“Passing was on point,” Evans said. “Serving and passing is what definitely what helped us win this match.”

Cerruti said the Bombers were relaxed heading into the match.

“Once you have a good pass, everything else falls into place,” Cerruti said. “I think we were very calm and we played our game.”

“We passed very well,” Dulfer said. “We work a lot on structure of the game. That’s our focus right now. When you pass pretty well, that makes structure easier.”

The Bombers return to action Sept. 24 against Nazareth College and Stevens Institute of Technology. They will face Nazareth at 1:30 p.m. and Stevens at 4 p.m. in Hoboken, New Jersey.

The Bombers competed at the F&M Scramble Sept. 16–17 in Lancaster, Pennsylvania.