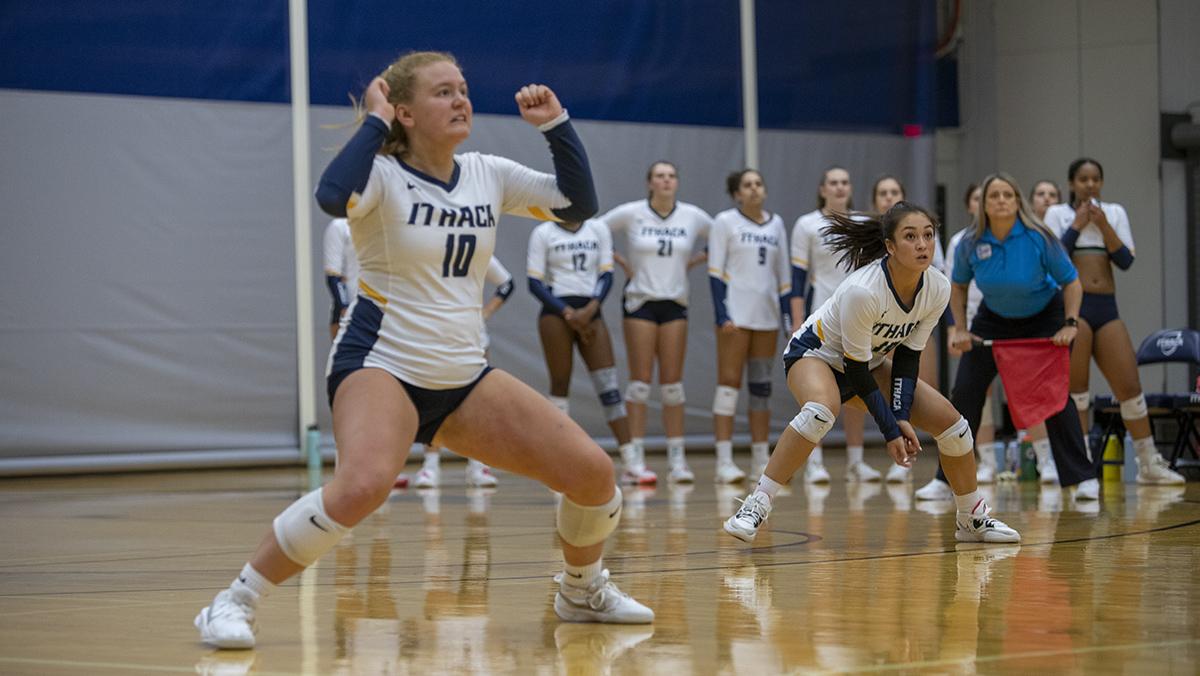 The Ithaca College volleyball team improved its overall record to 19–4 following a 3–0 victory over the Brewers of Vassar College. The win extended the Bombers’ impressive undefeated streak of in-conference play to five matches.

The Bombers came into the match strong, immediately earning a lofty lead over the Brewers in the initial set. Senior defensive specialist Grace Isaksen was a force behind the baseline, earning a pair of uncontested service aces in the set to secure a lead for the South Hill squad. The Bombers continued to show effortless dominance at the net, with senior middle hitter Jennifer Pitts and sophomore middle blocker Aleka Darko sending three unreturnable balls into Brewer territory. The pair notched one and two kills in the set, respectively.

The Brewers entered the second set with more momentum than the first, managing to lead the Bombers 6–4 by the time the first timeout was called on the floor. The Brewers’ sophomore outside hitter Hailey Hayes was vigilant at the net, earning three kills to put the Bombers under pressure. Despite the adversity faced through mid-line fouls, the Bombers were able to pull away to win the set 25–18 with the help of some valuable kills by Darko.

The Bombers were quick to bounce back and set the tone of the third set of competition with strong performances from senior outside hitter Camryn O’Leary and sophomore setter Peyton Miller. The pair contributed largely to the 19–12 lead that the Bombers were able to secure by the first timeout. O’Leary and Miller finished out the match with 11 kills and 31 assists, respectively. Their dominant performances took the footing from the Brewers, who notched three service errors on the set, and ultimately solidified the Bombers’ 25–15 win.

“Serving is definitely a weapon, and it’s one of the only chances I have to make an impact offensively,” Isaksen said. “Even if I miss, I’m going to miss with conviction.”

Isaksen continued that by focusing on their own game, her team will see the success they’re looking for as post-season approaches.

“We’re really focused on each other and building each other up,” Isaksen said. “We’ve built a lot of strong connections this fall and I think that’s becoming really apparent now as we get closer to the end of our season.”

The Bombers will next take on the Bard College Raptors for their matinee Senior Game at 2 p.m. Oct. 22 at home in Ben Light Gymnasium.