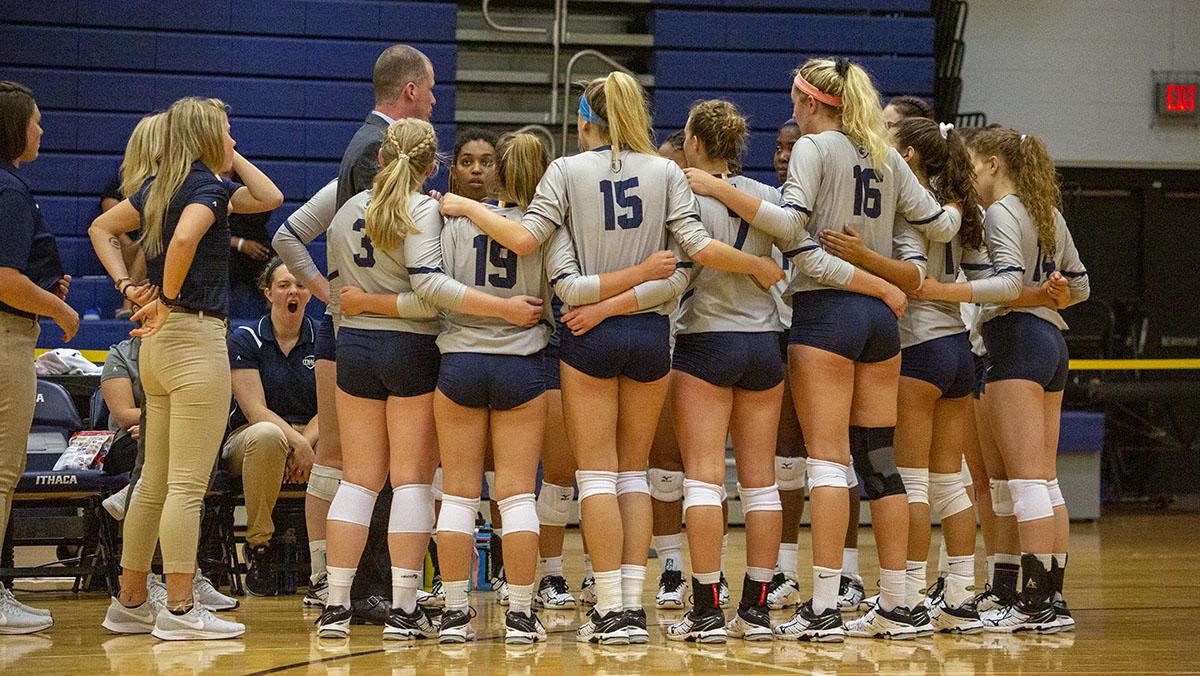 After the Liberty League’s cancellation of the Fall 2020 campaign due to the COVID-19 pandemic, teams have put a strong emphasis on offseason training. The Ithaca College volleyball team took initiative in its training this summer to ensure that it is prepared to compete when the season tips off.

However, this summer’s competition has had a greater impact than past years by keeping the team connected despite challenges presented by the COVID-19 pandemic.

Each summer the volleyball team participates in a player-coordinated exercise competition called the “lift-offs,” to keep it prepared for the season ahead. Other teams at the college have held similar competitions. The men’s soccer team held a lifting competition summer 2020, senior captain Lee Folger said.

Senior volleyball captain Jordyn Lyn Hayashi said she believes the competition was a good way to keep the team focused over the summer as it prepared for its return to the court.

“It helps all of us stay fit over the summer,” Hayashi said. “It helps us stay conditioned, and I think it also allows us to build strength. So I definitely think that it prepared us in the sense that we all came in stronger than the year before.”

The competition was designed by the players to ensure that they kept up with their strength and conditioning program. The coaching staff was prohibited from assisting in the competition, because NCAA regulations prevent coaches from being involved with offseason training.

Lead coach Johan Dulfer said he was proud that his team took the initiative to maintain this routine during the summer.

“During the offseason, we’re not allowed to work with them,” Dulfer said. “They get their work, they get their program and they’re on their own. So, it’s just a sign of dedication on their part that they’re setting it up as a competition and they’re keeping each other accountable.”

Junior captain Jennifer Pitts said the group was divided into teams of three to four people, generally consisting of players from the sophomore, junior and senior classes, while freshmen were given a different workout program. The team completed certain exercises that the team’s strength and conditioning coach assigned on “lift cards” before the team left campus for the summer.

Each “lift card” included three lifts and four days of conditioning per week. Pitts said each card contained a “full body workout,” including Hex Bar deadlifts, push–ups, pull-ups, chin-ups and shoulder presses. Players would earn one point each if they completed the three days of lifts or four conditioning days.

Pitts said the team has not yet tallied the point totals from this summer, but the group that wins the competition will not have to carry equipment when the squad travels to compete against opposing schools.

The competition was completed remotely, because the players prepared for the upcoming season from their homes throughout the summer. The players kept track of the workouts they completed by logging it on a spreadsheet document, and sending a photo of their workout in the team’s Snapchat group chat. Pitts said this helped keep each other motivated and on task through this training process.

“Everyone has to add in their weekly lifts or conditioning sessions [to the document] to hold each other accountable,” Pitts said. “We use the Snapchat group chat as well, so everytime that you add something into the excel document, you also have to send a Snapchat.”

Lyn Hayashi and Pitts added that the athletes also had the opportunity to gain an additional point for every extra 30 minutes of physical activity that they took part in. Team members could participate in voluntary activities like completing workout videos on YouTube, biking, swimming and attending volleyball open–gym sessions.

Lyn Hayashi said these extra activities were an integral part of the competition for the players, serving as a motivating factor to both win the event and improve their game.

“You want to put in extra work to win the competition, but it’s also benefiting you in the long run,” Lyn Hayashi said. “I definitely think that helps prepare us even more for this season.”

The activity also helped the team stay connected during the offseason, despite the members living in different areas of the country. Pitts said that Susan Bassett, associate vice president and director of the Office of Intercollegiate Athletics, told the team that it was the most geographically diverse team at the college.

Lyn Hayashi said she thinks the competition served as a way to maintain the team’s bond during the summer.

“I think this helped us in the sense that we were able to see each other’s faces through the screen as much as possible,” Lyn Hayashi said. “Every time we would finish something, we would send it into the [Snapchat] group chat. And also, I think that helped us because we would also communicate within our small groups to check-in and see how everyone in our small groups were doing.”

Maintaining this connection was a focus during this past offseason. The cancellation of the 2020 season prevented the team from competing together for approximately two years. This presented the team with a unique roster situation, in which its freshman and sophomore classes have not yet competed at the collegiate level.

Junior Camryn O’Leary said the team’s veterans have made a strong effort to be mindful of the challenges that the pandemic has presented to its underclassmen, and have kept in touch with their teammates throughout the offseason.

“It was something that was definitely in the forefront of our mind [for] just upperclassmen or returning players to really be checking on the girls that are coming in,” O’Leary said. “They’re still new, there’s still a lot we have experienced, that we have not had the full Ithaca College experience. So, just keeping that in mind and talking to them more often than we usually would.”

The Bombers have since returned to campus and have had the opportunity to train in person. On the court, Lyn Hayashi said she believes that the activities put the team in a position where it was better prepared to compete when they came back to South Hill in mid-August.

“We all came in more conditioned than the year before,” Lyn Hayashi said. “Especially because of COVID and how much that set everyone back because we weren’t allowed to really train. So, I definitely think that the summer competition over the summer definitely prepared us for this season.”

Dulfer said he believes that his team’s training efforts show its desire to improve and reach its full potential when the season opened against SUNY Cortland on Sept. 1 at Ben Light Gymnasium.

“It’s a sign that they’re ready for a season, a sign that they’re looking forward to it,” Dulfer said. “They want to make sure that everyone comes and comes back in shape and ready to go, so that we don’t get injured [and] we can hit the ground running.”

Pitts said she believes that the competition played an important role in helping the team stay motivated and on task for the upcoming campaign.