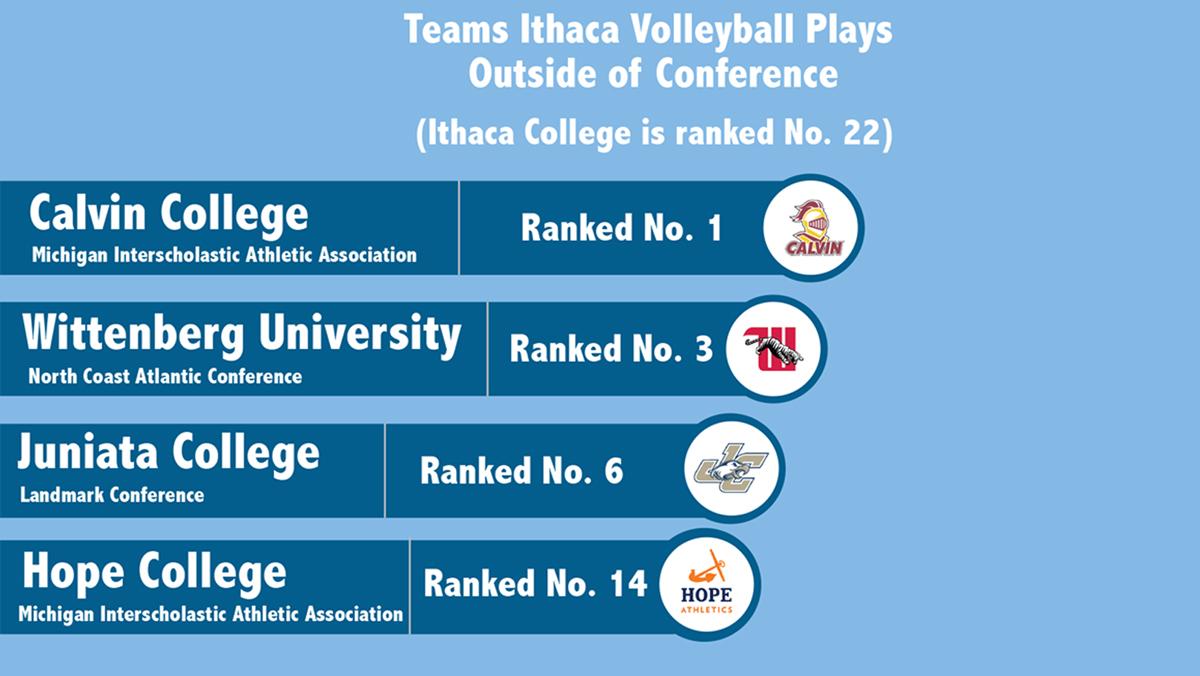 DESIGNED BY MAYA RODGERS
The Ithaca College volleyball team plays ranked opponents outside of the Liberty League Conference. The Bombers have faced these ranked teams so far this season.
By Ryan Lemay — Staff Writer
Published: October 31, 2018

In 2017, the Ithaca College women’s volleyball team made it to the semifinals of the NCAA Tournament. This season, the team is looking to go further in the postseason by competing against tougher teams outside of the Liberty League Conference.

Head coach Johan Dulfer said he came to the college to accomplish the goal of getting the volleyball team national recognition. To do that, Dulfer has given the program the hardest out-of-conference schedule in New York state in Division III.

Typically, a team will play every opponent in its conference at least once throughout the regular season. However, some teams will play more games than there are opponents in the conference, leading them to face teams outside of their league, which can increase their chances in getting a bid for the NCAA Tournament.

Out of the 72 colleges in New York in Division III, Ithaca College has the hardest schedule in the state. The Bombers have a strength of schedule rating of .647, which is determined by averaging the win-loss percentage of all the teams they faced this season. The next closest rating in the state is Vassar College’s .618.

“When I was hired at Ithaca College, my first priority was to ramp up our strength of schedule,” Dulfer said. “I did this so we would look pretty good compared to other teams if we needed an at-large bid.”

After the first set of rankings was released, the South Hill squad was ranked first in its region. At the end of each season, the NCAA committee looks at the rankings to see which top teams in each region still need an at-large bid.

“Ithaca is strong enough positioned where if we don’t win the league, to instead, get an at-large” Dulfer said. “There is a totally different strategy in trying to do that.”

This season, the team plays seven nationally ranked teams, and Dulfer said the Bombers will play 10 probable-ranked teams next season.

Sophomore outside hitter Reagan Stone said that after her experience last season in the NCAA Tournament and after playing seven ranked opponents this season, she believes her team is up to the task of playing 10 ranked teams next season.

“I, as an individual, feel prepared because I have trust in my team,” Stone said. “We have all worked hard and have the common goal of playing well no matter who we play.”

Dulfer said he believes this team is ready for the tough competition. The Bombers are 18–6 on the season with a perfect 7–0 conference record. With a win over Vassar College on Oct. 20, the Bombers clinched the regular-season Liberty League Conference title. However, if the college is defeated in the Liberty League tournament, Dulfer has scheduled games to ensure the Bombers build up an impressive resume.

This season, the Bombers, who are currently ranked No. 22 in the country in Division III, have already faced No. 1 Calvin College, No. 3 Wittenberg University, No. 6 Juniata College and No. 14 Hope College. The Bombers have struggled this season against ranked opponents, posting a 1–5 record.

Dulfer said he believes the trick to having a successful team is finding the perfect balance between a tough schedule and a good record.

“I could put together a schedule that could have us win 38 out of 40 matches no problem, and it may look good to people, but we would fizzle out in the tournament,” Dulfer said. “I want Ithaca College to be on the national map, so we got out and play the best teams in the country.”

When it comes time to putting the schedule together, Dulfer said he has a mixture of luck and strategy in planning who to play and when in the season. Dulfer puts thought into how teams played the current season and tries to predict how they will do the next season. He tries to find the best matchups for his program that will look good but not be too impossible for the team to beat.

Stone believes playing harder opponents is one of the main reasons the team made it so far in the NCAA Tournament last year.

“The strength of schedule definitely helped prepare us for NCAA’s last year,” Stone said. “We had no fear going into our first match against Emory since we were used to playing tough teams all season long.”

“Our team has one of the hardest schedules, but as a player, this has helped me improve in all aspects of the game,” Hayashi said. “I think that the increasingly harder schedule has helped us acknowledge how good we are as a team.”