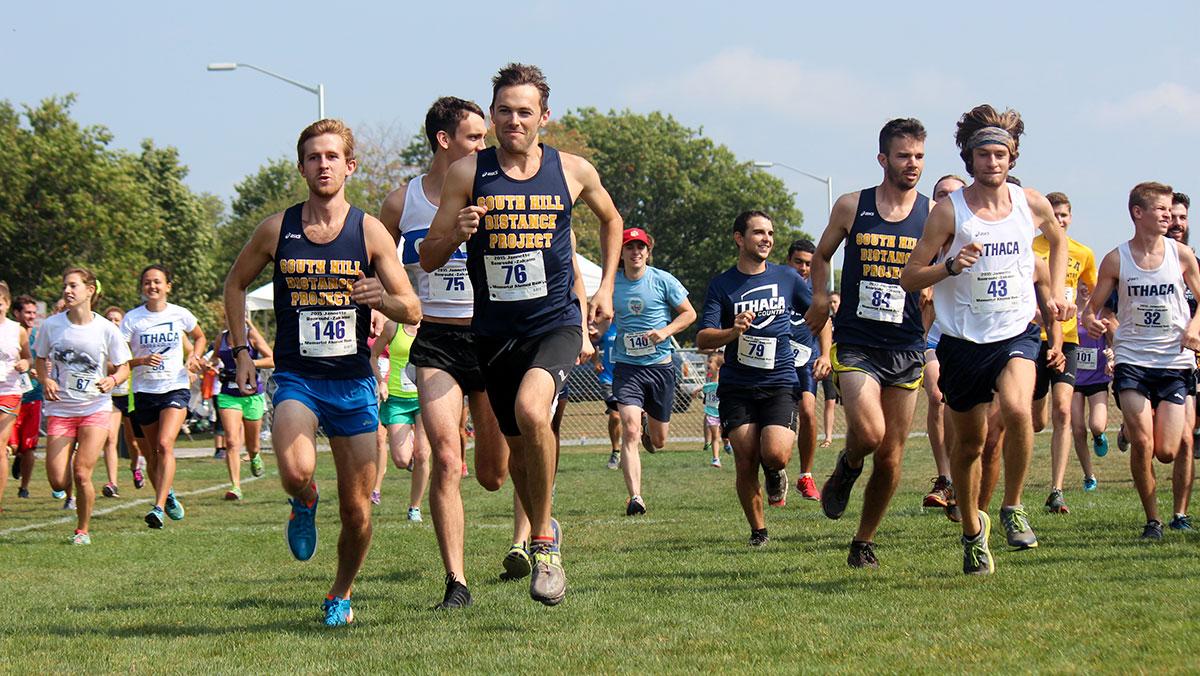 The women’s soccer team played in two matches from Sept. 4–5, as part of this past weekend’s Profs Soccer Classic hosted by Rowan College.

The Bombers’ dropped their first loss of the season after a 1–0 defeat to Rowan University on Sept. 4 in Glassboro, New Jersey.

The first half of the contest was a defensive battle, with either team failing to score in the first 45 minutes of play. Rowan registered two shots on goal while the Blue and Gold took four shots, none of them coming on goal.

In the 71st minute of play, the stalemate was finally broken by Rowan forward Cathryn McCarry on an assist from forward Tori Miller to put the Owls up 1–0 over the Bombers. The score would remain in favor of Rowan for the remainder of the contest.

The Bombers’ closest attempt to scoring came in the final minute of the game when junior forward Megan Nash aimed for the back of the net, but she was unable to convert as the kick sailed high above the crossbar.

When it came to total shots, the Bombers outshot Rowan 11–5, however, the South Hill squad came out unsuccessful in scoring any goals, taking four of the eleven shots on goal.

The following day on Sept. 5, the Bombers defeated Ursinus College by a final score of 2–1 in the second game of the Rowan Tournament.

In the 12th minute, forward Megan Nash put one into the back of the net early on making the score 1–0 in favor of the Bombers.

Both teams would go scoreless for the rest of the half, despite Ursinus’ seven shots.

Ursinus would finally put one right after halftime in the 52nd minute after Ursinus forward Mackenzie Groff crossed the ball to midfielder Jeannie Jasinski tying the game at 1–1.

The Bombers would answer back in the 71st minute as senior forward Sarah Woychick put them up 2–1 from the feed of Holly Niemiec.

Ithaca had some phenomenal goal play from Coppolecchia, who had six saves on the day, four of which came in the first half. Ursinus took 12 shots, seven of which were on goal.

The Blue and Gold split the tournament 1–1 and are now own a 2–1 record on the season.

The team gets a little rest before it takes on the Farmingdale College Rams (2–0) at noon Sept. 12 at Carp Wood Field.

The men’s soccer team started its season in the Mayor’s Cup Tournament with a 4–1 loss to Medaille College on Sept. 4 in Oneonta, New York.

It was a game in which Medaille was able to convert on its chances, while the Bombers were turned away on multiple occasions by Mavericks goalkeeper Brian Arcara.

Midfielder Jackson Hamilton opened the scoring for Medaille early in the first half, followed by forward Junior Geeba soon after.

Down 2–0 at the half, the Bombers amped up the intensity in the second frame, getting off 11 shots, but only finding one goal courtesy of junior midfielder Brandon Thompson off of a feed from freshman forward Jose Contreras.

The opening game also saw the emergence of junior Zach Jacobsen as the winner of the Bombers’ goalkeeper battle, beating out sophomore Dan Hinckley and freshman Brandon Enny.

The Blue and Gold returned to the pitch Sep. 5 to take on SUNY Oneonta.

It was a scoreless match for the first 44 minutes and looked to stay that way heading into the half, until Oneonta forward Dillon Johnson beat Ithaca junior goalkeeper Zach Jacobsen with a minute to go in the first frame.

In the second half, senior forward Jake Sutherland doubled the Red Dragons’ lead, and it would stay that way as the South Hill squad dropped to 0–2 on the season.

Oneonta was able to get off 17 shots against the Bombers’ defense, with 10 on goal and seven of them saved by Jacobsen. Ithaca managed just one shot all game, coming in the second half.

While the Bombers were able to generate more offensively against Medaille and could not convert on their chances, their attack was snubbed out entirely by the Red Dragons, and they were unable to hold them off in their own end of the field, forcing Jacobsen to play clean up.

Following the tough opening to the season, the Blue and Gold will get back at it when they host SUNY Cortland at 4 p.m. Sept. 9 at Carp Wood Field.

Alumni, current students and future students all converged into the Upper Terrace field to compete in the annual Jannette Bonrouhi-Zakaim Alumni Race on Sept. 5. The race honors the life of Bonrouhi-Zakaim, who died in 2000.

Bonrouhi-Zakaim was one of the best distance runners in Ithaca history and led the Bombers cross-country team to four consecutive top five finishes at the NCAA championships.

She was a six-time All American and the 1990 New York State Women’s Collegiate Athletic Association scholar-athlete. Bonrouhi-Zakaim was inducted into the Athletic Hall of Fame in 1996.

Sporting their navy “has been” shirts, both recent graduates and old alumni came from across the country to participate in this year’s race. Their children wore grey “will be” shirts and participated in a 1K race.

Over 100 people participated in this year’s 5K run, and nine children ran the 1K kid’s race.

Cory Petermann ’09 said he was excited to return to South Hill to take part in the event.

“We love it up here, and it’s always fun to come back,” Petermann said. “It brings back such great memories.”

Sophomore Taryn Cordani cruised to a victory in the women’s race, finishing in 18.43, almost two seconds ahead of her next closest competitor.

Sophomore Denise Ibarra was second in 20.28 followed by freshman Emilie Mertz in 21.05 and junior Kristin Lynn in 21.06.

Alexa Rick ’15 was the top alumni finisher in eighth place with a time of 21.36.

Women’s cross-country head coach Erin Dinan participated in the race, finishing 13th, and said the race has a meaningful impact for the current athletes to stay competitive heading into the season.

“I told them that the goal was to get out there, get a good hard workout in and work hard after they get to the top, start rolling down and pushing the finish,” Dinan said.

The race was just one part of alumni weekend, which also featured a meet-the-team dinner, a picnic and a morning round of golf.

Dinan said the event is focused on friendly competition rather than competing individually.

“I’m excited, this weekend is more about having fun and getting a good effort in,” Dinan said.

Both the men’s and women’s teams will travel Sept. 12 to Saratoga Springs, New York, to compete in the RPI Invitational.

Dinan said the team has been preparing for the meet over the last few weeks.

“We want to keep doing things the same way we always always do them and building on working together,” Dinan said. “Saratoga Springs is a nice, good competitive meet — less hilly course than this, but it will be good competition.”

The volleyball team competed in the Brockport Invitational on Sept. 4 and 5 at the Jim and John Vlogianitis Gymnasium in Brockport, New York.

The Bombers won the first three matches against Gordon College, Skidmore College and Penn State Behrend, but suffered their first loss of the season to undefeated host SUNY Brockport.

They totalled 15 total blocks and played the whole match with strong defense. The Thoroughbreds did not record a single block in the match, as the Bombers held them to a .030 hitting percentage as well.

On Sept. 5, the South Hill squad took on Penn-State Behrend and SUNY Brockport.

It was an up-and-down first set for the Bombers, as they quickly found themselves down 6–2 right out of the gate. After a timeout by head coach Janet Donovan, things got even worse as Behrend continued to go up 11–4.

The South Hill squad was able to turn it around, though, thanks to some great team play and serving. The Bombers eventually tied it at 12 points apiece on their way to a dramatic 25–23 comeback first set win.

Sophomore Joelle Goldstein, who played in all 36 games for the Bombers last year as a freshman, led the team with 13 kills for the second straight game as well as two aces.

Fellow sophomore Kayla Gromen chipped in with 32 assists and eight kills of her own, along with freshman Amanda Cerruti who recorded a team-leading five blocks.

The second and third sets were a tale of two stories for the Bombers. Riding the wave of confidence after their first set win, they picked up the second set easily 25–11, hitting .348 as a team with 11 kills.

However, the Bombers were unable to keep any of that momentum going in the third set.

In the end though, Ithaca was able to stay away from a fifth set, beating Penn State Behrend 25–17 en route to its fourth straight win of the season.

The second leg of the doubleheader did not go as smoothly for the team from South Hill.

The Bombers struggled through the first set, where Brockport took control early and never let it go. After cutting the lead to 16–13, it appeared as though the Bombers were poised to make a surge for the lead. However, they were not able to get any closer, losing the set 25–16.

The second and third sets proved to be just as challenging for the Blue and Gold, losing them by a score of 25–15 and 25–22, respectively.

Sophomore Joelle Goldstein again led the team in kills with nine, while Gromen led the team in assists with 24 and aces with two. Freshman Hailey Adler also contributed with four kills. For the game, the Bombers hit .136 with 30 kills.

Overall, the squad finished with a record of 3–1 in the Brockport Invitational, moving it to 4–1 on the season. The team’s next game will be 7:30 p.m. Sept. 11 against Empire 8 rival Alfred College, kicking off the 2015 Bomber Invitational.

In the first tournament of the season, the women’s golf team placed in sixth in the St. Lawrence Invitational on Sept. 6 in Canton, New York. The team was able to shoot a total score of 691, while New York University came in first place with a total score of 594.

On the first day of the tournament, the team shot a total score of 354, which was 66 strokes above par. On the second day, the women were able to improve their game and shoot 49 strokes above par. Shooting 17 fewer strokes on day two helped the team move from seventh to sixth place.

Head coach Molly Braid said she is happy with how her team played and with the outcome of the tournament.

“Three out of the four players shot their career-low rounds today, with career-low tournament scores as well,” Briad said. “Dropping almost 20 shots in the second day of competition is incredible, and I am so proud of all of the players.”

Sophomore Lauren Saylor said each member of the team needs to work on their putting for the next tournament, even though the green speed was difficult to gage this weekend.

Sophomore Kyra Denish had a total score of 157, which was the best score for the Bombers, and came in seventh place individually. Denish improved on the second day by improving by three strokes.

Of her game, Denish said the main thing she needs to focus on is her confidence, especially when it comes to putting.

“If I trust myself, the ball should fall in the hole,” Denish said.

Sophomore Indiana Jones had the next best score for the South Hill squad with 162 and came in 15th place. She did her best on the first day by having seven strokes above par. On the second day of the tournament she had 11 strokes above par, which caused her to move down eight places.

The Blue and Gold will compete next Sept. 12 and 13 during the Empire 8 Championship in Victor, New York, at the Ravenwood Golf Course.