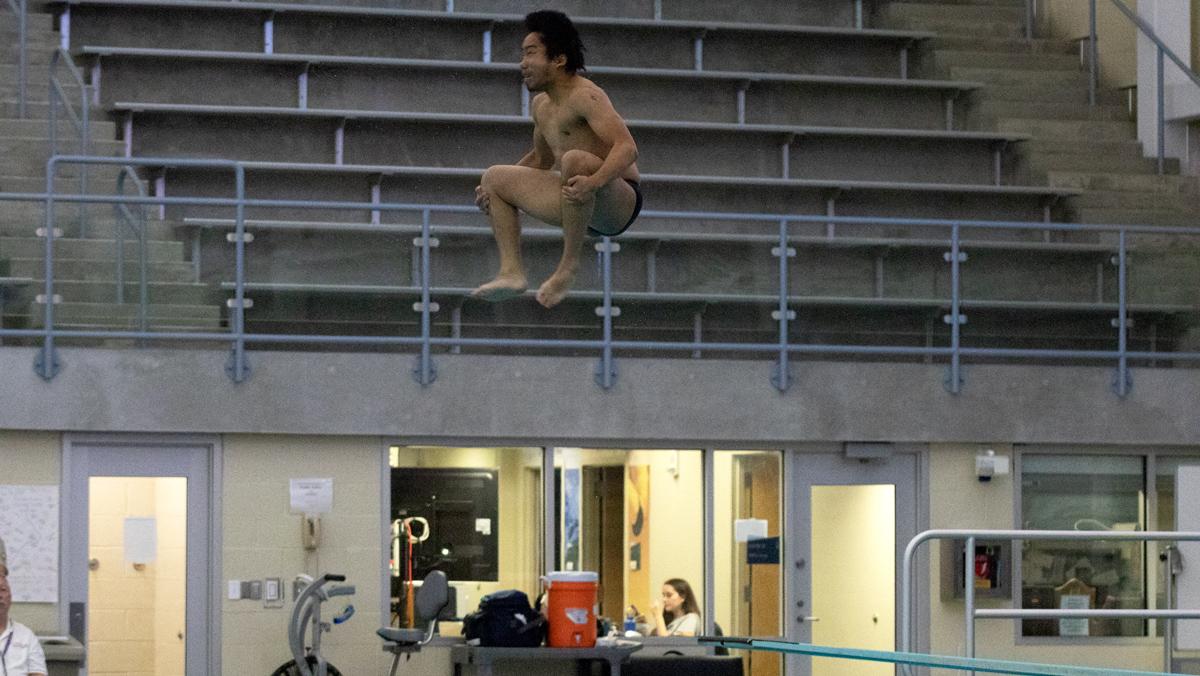 JULIA CHERRUAULT/THE ITHACAN
Sophomore diver Justin Moczynski plunges toward the water in a meet Nov. 30. The swimming and diving teams returned to campus Jan. 2, along with the other winter sports teams, as they all trained over the break.
By Jack Murray — Sports Editor
Published: January 22, 2019

Most students at Ithaca College are relaxing and recovering during their winter breaks, athletes stay on campus, practicing and competing, while the campus on South Hill remains mostly desolate.

The college’s winter break occurs from Dec. 21 to Jan. 21, and many students are able to leave sooner if they finish their finals earlier. While most students travel back home to hang out with friends, rest with family and possibly try to scrape together a few bucks through odd jobs, the 149 male winter athletes and 143 female winter athletes sacrifice time at home to continue the training that started with their season kickoffs in November.

Most teams returned to campus around Jan. 1, but the men’s basketball team returned on Dec. 27 in preparation for its Land of Magic Classic tournament in Daytona, Florida on Dec. 29. Sophomore guard Cooper Macklin said the team was able to pick up just where it left off before finals began.

“We got five days off before exams and then had to come right back to school,” Macklin said. “It was definitely a quick break since we went right to Florida and returned on New Years and have been back ever since.”

The Bombers went 1–1 in Florida and fell to Hamilton College, who were ranked No. 5 in the country when the game was played. Macklin also said the team improved its chemistry over the Florida trip and was able to get into a routine of practicing during the week and playing games on the weekend.

“We were constantly together, eating meals and on the beach,” Macklin said. “We have a bunch of new freshmen this year, and while we were close to them before, we are definitely even closer now.”

While the bonding experience with teammates was beneficial for the men’s basketball team, Macklin said the lack of students on campus caused the team to feel isolated.

“It’s definitely lonely up here when it’s just us,” Macklin said. “We usually have practice from around 10 to 12 and then have shootaround later on in the night. It’s lonely but we are always together and hanging at someone’s house or apartment.”

The swimming and diving programs at the college entered winter break after a long break from competition, which began Dec. 2 and lasted until Jan. 19. Even though they did not have any meets until the end of winter break, they still were back on campus Jan. 2. Sophomore diver Justin Moczynski said a few athletes headed up earlier so they could be in prime shape for winter training.

“The pool is available for practices prior to our winter training session, so we usually arrive early in order to prepare after sometimes not working out for a while,” Moczynski said. “In addition, the divers focus on breaking bad habits while diving in the morning with easy dives and then work on our harder dives in the afternoon.”

Like Macklin, Moczynski said the winter training was beneficial since it allowed the team to form a close bond.

“We see each other very often since we are training at least twice a day throughout the break,” Moczynski said. “We learn more about each other in the athletic environment while swimming, diving and lifting, as well as personally outside of practice. We prepare and eat some meals, usually dinners, together almost every evening, as well as participate in some activities such as attending a movie or getting together to play games.”

While the team has been able to grow closer, Moczynski said that leaving home so soon was extremely tough and made him appreciate the time he did have at home even more.

“The most difficult aspect of leaving home early is the small amount of time we spend with our families,” Moczynski said. “There is only so much time to spend catching up with family members since we arrive home, stay for about a week and very quickly report back to school.”

Even though the athletes are on campus, Macklin said, the dining halls are completely closed during the break. Instead, the coaches give out meal money that allows the athletes to properly fulfill their nutritional needs.

“The coaches give us meal money from the NCAA,” Macklin said. “It’s definitely enough to get us through winter break. The coaches also provide meals for us sometimes before or after practice and take us out to dinner, occasionally.”

Freshman runner Kristina Hoefler said she was unfortunately unable to see some of her friends back home whom she had not seen since the summer, but she enjoyed the time she was able to use developing closer friendships.

“What was great about coming back early is that I got to be with my teammates again,” Hoefler said. “We had a blast doing fun team activities and hanging out in our off–time. I would watch Netflix, play card games and make different kinds of cookies with my teammates in the evenings, which was really fun. We even played Twister and had some team dinners. I also felt like everyone was able to become closer as a team and as friends.”

Hoefler said her daily routine was manageable since she had lots of free time to focus on her sport as well as get to know her teammates and the college in general.

While leaving home early is tough for the winter athletes at the college, Moczynski said the opportunity to bond with teammates and develop chemistry on and off of the playing surface was worth the early trip back to campus.

“The team’s dedication to improve over the winter break represents individual sacrifice for the better of something other than themselves,” Moczynski said. “It also demonstrates passion for the sport and for the success and well-being of other teammates.”