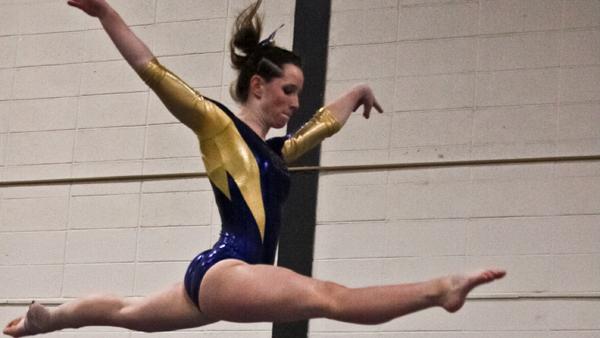 After a season of fierce competition that led to a spot at nationals last year, the Ithaca College Gymnastics team looks to continue its success by developing a team composed primarily of underclassman into a national championship contender.

The Bombers finished at 9–4 for the 2011-12 competition season, with a perfect 6–0 home record and a 3–4 road record. Their strong year led to a third-place finish at the Eastern Collegiate Athletic Conference Championship. They then moved onto nationals, and after a few missteps, the team finished in 6th place out of six teams at the National Collegiate Gymnastics Association National Championships.

Junior Kate Woodward said coming into this season, the team has set goals to strive for, not only for nationals but also for progression among teammates and mental training.

“We all want to win nationals, but instead of setting that as our main goal, we are doing a bunch of process goals, which are smaller goals for the season,” Woodward said. “So things like having a positive attitude or coming together as a team are just as important.”

The team must adapt to an entirely new lineup due to the loss of six graduating gymnasts. These losses include Jessica Bolduc ’11, the college’s most decorated gymnast, as well as former captain Kim Callahan ’11.

Senior Chelsea Robie said while these losses do have a great impact on the team, the gymnasts know what they need to do as a team to keep up with the rest of the Empire 8 as well as outside competitors.

“Performance wise, it was a big loss, because everyone we lost was in lineup for multiple events, so we did lose experienced people who had been competing for four years,” Robie said. “Now, we are focused on the seniors, juniors and one sophomore we have left, because we have to step it up and push the freshmen to show their potential and be their best so we can still be competitors.”

Head Coach Rick Suddaby will lead the gymnastics team again this season along with the help of Assistant Coach Emily Graber ’10, a former gymnast at the college. In addition to the coaching staff, Kim Callahan ’11 and Kay Gordon ’11 have both been attending practices to help the South Hill squad train.

Along with the return of former gymnasts as coaches, two of last year’s seniors will be returning to competition. Graduate students Tiffany Grube and Christine Niles were both members of the team last year, but because of previous season injuries, they are both eligible to return again this season. Other key returners include Robie and members of the junior class, such as Shilanna Gallo, who helped the team greatly last season. The team will also add seven new freshmen to the Bombers squad to fill out a roster of 16 gymnasts.

Suddaby said while it is still preseason, the team looks as strong and determined as ever to take on the challenges they face under their new lineup.

“We are looking forward to an exciting year, because we are motivated and together already during the preseason,” Suddaby said. “We have an awesome balance of seasoned leaders and newcomers, so anything is possible.”

The Bombers will open the season at home against SUNY-Brockport on Jan. 12. Last season, the Blue and Gold traveled to Brockport for the season opener and lost 185.000-182.325.

Sophomore Valerie Cohen said even under the circumstances, her hopes are high, because she believes the team’s passion and family-like bond can propel them high into the Empire 8 standings.

“I’m really optimistic about our enthusiasm level and how our team has come together,” Cohen said. “What separates us from other teams is our enthusiasm and that we work together as a family, because we are more than just a team.”