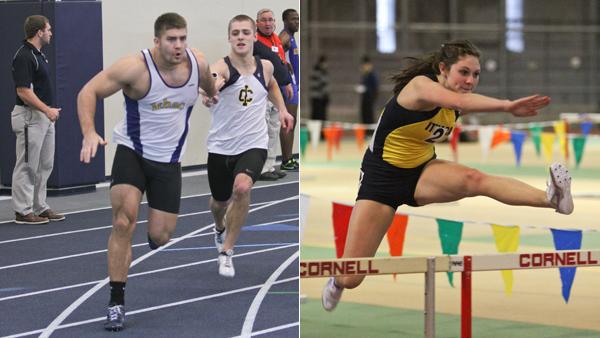 Men’s Head Coach Jim Nichols said last season was a solid year for the team all around. The team placed sixth at the Eastern Collegiate Athletic Conference led by senior David Geary’s school record-breaking 4:16:96 mile and Matt Confer’s school record of 8.52 in the 60M hurdles.

Going into last season, Geary said, the team was concerned about how it would cope without the graduated seniors from the year before, but much of the team stepped up and worked hard to make it a successful season.

Nichols said Geary and fifth-year senior thrower Jusan Hamilton will be key returners for the team. Geary said upperclassmen experience and skill will set the tone for underclassmen.

“A good thing about a place like Ithaca is that as people graduate, we have up and coming underclassmen and juniors taking up their roles as leaders, both athletically and personally,” Geary said.

Nichols also said the team will be returning individuals that gave strong performances at last year’s state championships. Sophomore middle distance runners Mason Mann and Dennis Ryan proved themselves at states as freshman, placing first in the 500M and in the 800M respectively.

“We’ve got some high quality athletes coming back and a strong senior class,” Nichols said. “We’re looking forward to getting competition started in December to see where we are at.”

Some goals of this season will be to improve individually, win the conference championship and qualify as many athletes as possible for the NCAA championships in March. Nichols said he always tells the team to compete for fun and to achieve their personal best marks.

“We want our kids to enjoy what they are doing, enjoy completion, but we want them to strive to be the best that they can be, and this is a highly competitive intercollegiate athletic program,” Nichols said.

The team looks to take it one meet at a time to start. Geary said many of the athletes look to see where they are early on at the two meets prior to winter break and then come back to see how they have progressed over that period.

“I have a lot of confidence in how we will do this year — we have a lot of guys who were around last year that saw how well we did as a group and want to continue that success,” Geary said. “I imagine the new members of the team will be looking to contribute with the same mentality.”

The 2011-12 season saw the women’s indoor track and field team on top of the regional field once again. In addition to its three championship titles at the New York State Collegiate Track Conference, Eastern Collegiate Athletic Conference and Empire 8 Conference tournaments, the team sent nine members to nationals.

“Last year’s senior class was phenomenal,” senior Amanda Rissmeyer said. “We had six or seven graduates as record holders. Not only were they amazing at their events, they were all incredible leaders. I learned so much from them last year, and they always led by example.”

The team will look for leadership in returning senior Jennifer Randall, a middle distance runner, who was a national qualifier and school record holder in the 800-meter and 1,500-meter last year. The talents of Rissmeyer — also a national qualifier in the high jump and heptathlon — will also be key to the team’s overall success.

Rissmeyer attributed much of the team’s success last year to the then-freshmen. She said she was surprised at how well the team began last season.

“Our freshmen last year — this year’s sophomores — were fantastic,” Rissmeyer said. “They came in right away and stuck with the upperclassmen.”

The team has already started working together in the preseason. They have been having captain’s practices, utilizing pool workouts and bonding outside the Athletics and Events Center with team dinners.

Head Coach Jennifer Potter said the team is trying to build on its previous year as individuals. Goals of the season will include placing in the top 10 at the national championships, taking as many women to nationals as possible and defending their titles at the state, Empire 8 and ECAC level, Potter said.

“We hope to progress as a group both athletically and academically, and go from season to season and year to year,” Potter said.

Potter also said the incoming freshmen have already been working out and said she can tell they have been putting time into preseason. The team has already done some testing in the weight room, and Potter said she is more than happy with where the team already stands.

“I’m excited,” Potter said. “Our freshmen came in with a great attitude and a lot of work over the summer, in addition to the returning athletes that we have. It’s going to add a lot of excitement and depth to the program.”