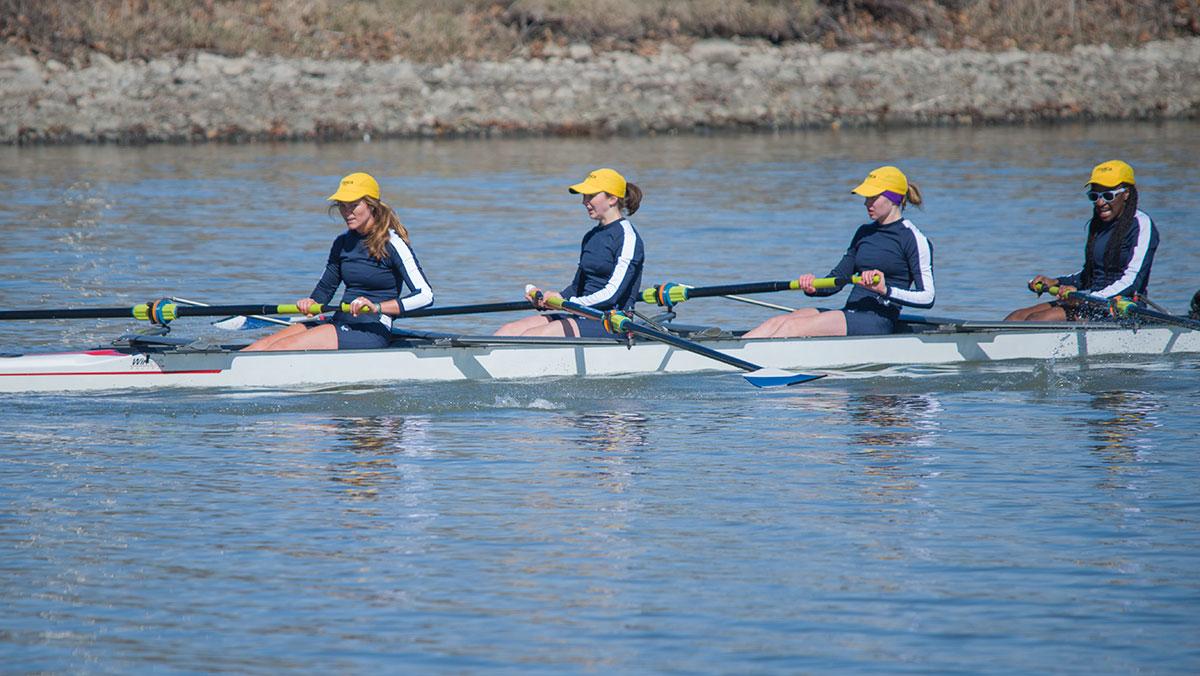 Becky Robinson, Ithaca College women’s crew head coach, gave 23 women the chance to try a new sport this year — one that is completely different from any sport they may have played before. She said she emphasized to the women that they did not need any experience to join and persuaded them to sign up.

The women’s novice crew is designed to introduce new rowers to the sport and prepare for the varsity team. She, along with novice coach Allison Carter and novice assistant coach Madison Keaty, train the women from the bottom up. After being on the novice team one year, they then move up to varsity.

Although Robinson said most of the women have never rowed before, most of them do have previous athletic experience, making it easier on both sides.

“Those who have experience of athletics in high school learn a little quicker and are more coordinated,” Robinson said.

Freshman Riley Simons said she did not want to continue playing field hockey in college but wanted to stay active and involved with a team. She said she got her chance to be a college athlete when Robinson asked her to join the novice crew.

“I didn’t know anything,” Simons said. “We all had to learn everything.”

In the fall, the coaches begin by having the women use the ergometers, or stationary rowing machines, to learn basic rowing techniques. The women then move on to pool stations, which consist of a stationary boat attached to the pool’s wall. This allows them to go through the body motions they learned on the ergometers while getting accustomed to holding an oar.

Robinson said that while learning to row can be a little hard, it is not as complicated as some might perceive.

“It’s not intuitive, but it’s not that complicated,” Robinson said. “Teaching novices how to row is protocol and is very mechanical at first.”

Once the women are accustomed to the ergometers, they head out on the open water and face a brand-new challenge — the boat. Normally, Robinson said, it takes about four to six weeks to get down the basic technique. By the eighth week, the women are ready to begin training for and competing in races.

Freshman Waverly Datner said rowing on the water is much more difficult than the erg and brings a whole new set of obstacles but that the women push through with the help of their coaches.

“When we go on to the water, the whole game changes,” Datner said. “Somebody who could be really good on the erg and powerful might not have amazing technique on the water, so they really try and give us all the pointers they can.”

Robinson said she encourages the women and also pays close attention to detail, often critiquing their technique and giving them tips to get faster. One thing Robinson said she looks for is if the rowers extend their arms and legs at the correct time to get the fastest results.

Datner said because the women largely come in knowing nothing, they have the advantage of being on a level playing field.

“We started at equal playing grounds, so it’s cool getting to see everyone grow individually and as a team,” Datner said.

Freshman Megan Compton said this gives everyone an equal opportunity to get one of the eight spots in the boat. With 20 women, it can be tough competition.

“Because we all started it together, not knowing anything and picking it up and going for it, it’s made us become close,” Compton said. “We all started from the bottom.”

Compton said the rowers take their newfound sport seriously and are passionate about it but that they also like to enjoy their time as novices and have fun with their sport.

“We always have a good time, even if it’s a hard workout,” Compton said.