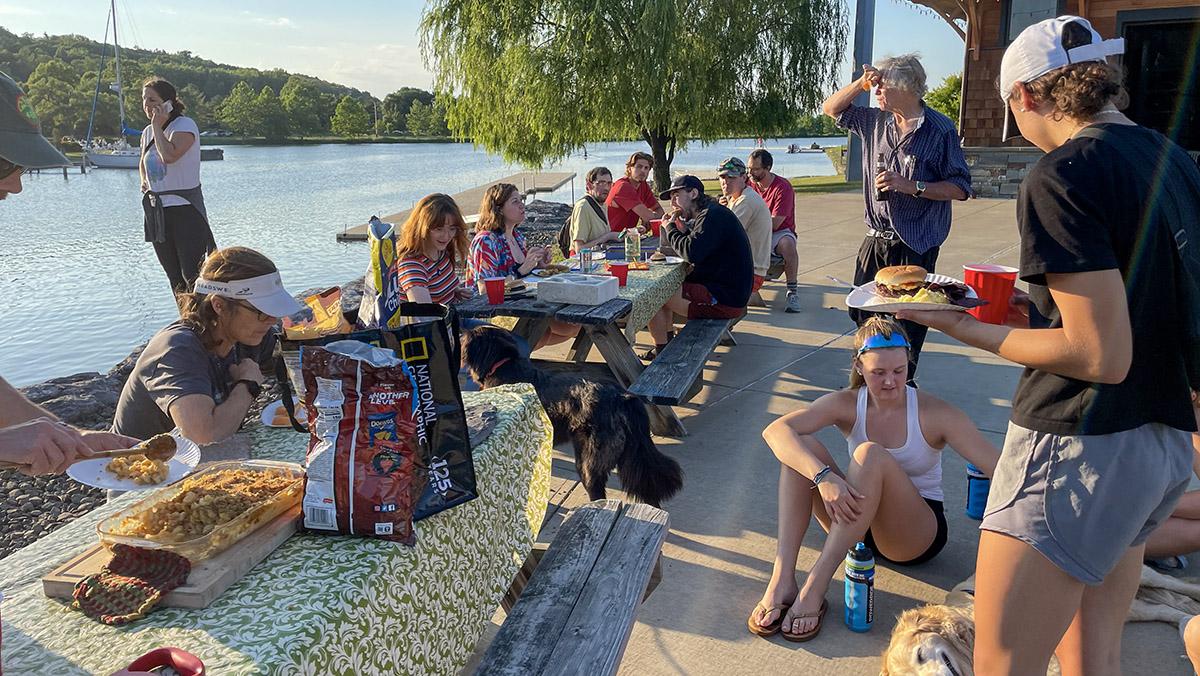 At one table, teammates Zoe Foster ’22 and Bobby MacInnis ’22 played a version of “Guess Who?” with their teammates’ faces instead of the normal characters. Others played cornhole, while the rest talked with each other or played with the several dogs in attendance.

Robinson, who announced his retirement from the team in March, and his wife Becky Robinson ’88, head coach of the Ithaca College women’s crew and sculling teams, have been hosting the cookouts every week over the summer for more than 30 years. And while Dan Robinson said it is intended as an event for the team, the event is open to almost anyone.

“Every once in a while, we have some alums up in Syracuse [who] will show up,” Robinson said. “The rowing community [in the city] is invited, the college community is invited, and they can bring friends. All these times, it’s an open invitation.”

Aside from the handful of athletes and coaches, there were recent graduates, professors, children of coaches and Ithaca community members who were involved with rowing. Although there were only around 15 people there June 23, Robinson said they have had around triple that many at times.

MacInnis, who was on the team for three years, said this summer is the first time he has been to one of the team cookouts because he has not been in the area in past summers, but he hopes to get to a few more before the summer ends.

“I’m here all summer doing a class,” MacInnis said. “So, I don’t know, I can come hang and see some people. You never know who’s gonna be at these things. … I love this weather, it’s relaxing. And it’s better than just eating in my house, in my kitchen.”

While the team bonding and summer relaxation is fun, there are other things to enjoy for some of the people in attendance. Foster, who was a coxswain for the team, said they come for the dogs people bring with them.

“We have many boathouse dogs,” Foster said. “Becky [Robinson] has Rigor and Nala, and Crista [Shopis], who’s the men’s assistant coach, has a dog named Chupa. … There can be upward of four dogs here at any given moment!”

Foster, like MacInnis, also had not been to any of the summer cookouts before this year, mostly because it was hard for them to stay in Ithaca for the summer. They said older students and recent graduates tend to make up most of the crowd, but underclassmen know they are invited too.

“This is my first summer [in Ithaca], and I’ve been looking forward to this since I was a freshman,” Foster said. “We don’t really advertise it very much, but it’s just like, ‘if you’re in the area and you want to hang out and get free food on a Thursday, then just come down and hang.’ It’s super casual.”

Located right by Cayuga Lake, the Ward Romer Boathouse has a concrete patio outside with picnic tables just beside the water. Some rowers had just returned from a trip out onto the lake and were still dressed in their workout clothes.

Robinson said the casual nature of it is what makes it so much fun. He said he spends around $15 a week on burgers and sausages, and whoever else comes is invited to bring a side dish or drink, but there is no pressure to contribute — just to come and have fun.

“We always got stuff, and if we run out, we run out, so it goes,” Robinson said. “It’s totally informal. … And if it’s raining, we got this big umbrella [for the grill] and we move the picnic tables [inside the boathouse]. We’ve done it rain and shine.”

Jared Anderson ’22, another recent graduate of the team, said he, much like many college students, will never deny an opportunity for free food. But more than that, he said he is glad that the cookouts give him a way to see his teammates and coaches one last time before he moves out of Ithaca. Unlike Foster and MacInnis, Anderson said he went to the cookouts all four years of college.

“I really enjoy these,” Anderson said. “It gets us connected with a lot of the people who we’re not going to see. For me, I just graduated, and I get to hang out with alumni and my friends, who I might not see all that much once I finally have to move away.”