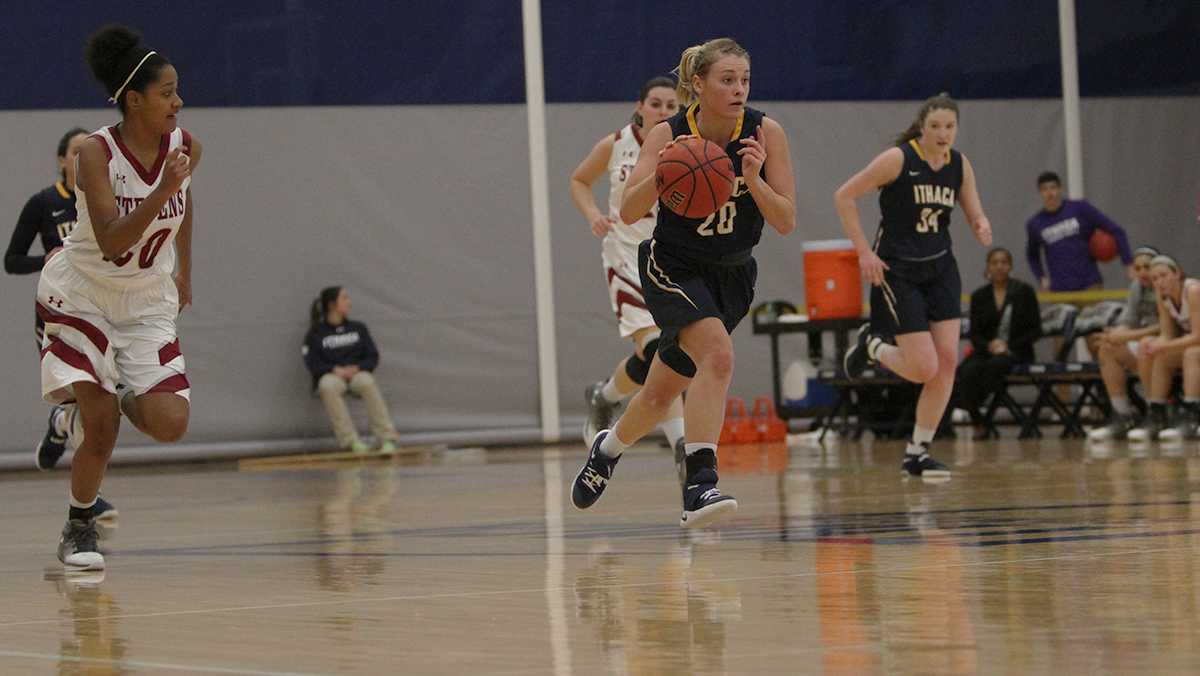 The Ithaca College women’s basketball team outlasted Stevens Institute of Technology  74—53 Feb. 4 in a crucial Empire 8 matchup. The Bombers continue the season with a seven game win streak, improving to 18—3 overall and 10—2 in conference play.

The Blue and Gold looked for redemption over Stevens after taking a 74—43 loss to them on the road  Jan. 17. The Bombers are now tied for first place in the Empire 8 Conference.

The game started slow, as the Blue and Gold trailed most of the second quarter but eventually outscored the Ducks 30—10 in the third quarter.

The Bombers discussed at halftime that Stevens is a strong third quarter team. In order to prevent Stevens from taking control of the game, the Bombers needed a plan. Junior point guard Erin Woop said the halftime talk about Stevens helped build up momentum for their 30-point third quarter.

“We had to come out playing hard, get stops and finish shots, so that’s exactly what we did,” Woop said.

The Bombers came back from a three-point deficit at halftime. Stevens started with the ball, but possession quickly turned over to the Bombers who then converted the jump ball into two points. During the first three minutes of the third quarter the Bombers went on an 8-0 run.

To end the third quarter, sophomore Annie Giannone hit a three-pointer with 2.5 seconds left on the clock, giving the Bombers a 55—38 lead into the fourth.

Junior Jordan Beers lead the Bombers in points, shooting 53 percent from the field for 22 total points.

“We focused on how we were going to play,” Beers said. “Not playing to how they play and playing our type of game.”

The key to success for the Bombers win over Stevens was their energy and commitment to one another, assistant coach Devin Shea said.

“The bench had humongous energy today,” Shea said. “It was a one through 15 kind of win, and the girls really started to play together again which was nice to see.”

The Bombers look ahead with hopes of continuing strong play as they face Empire 8 Conference opponent Elmira College at 6 p.m. Feb. 7 in Ben Light Gymnasium.