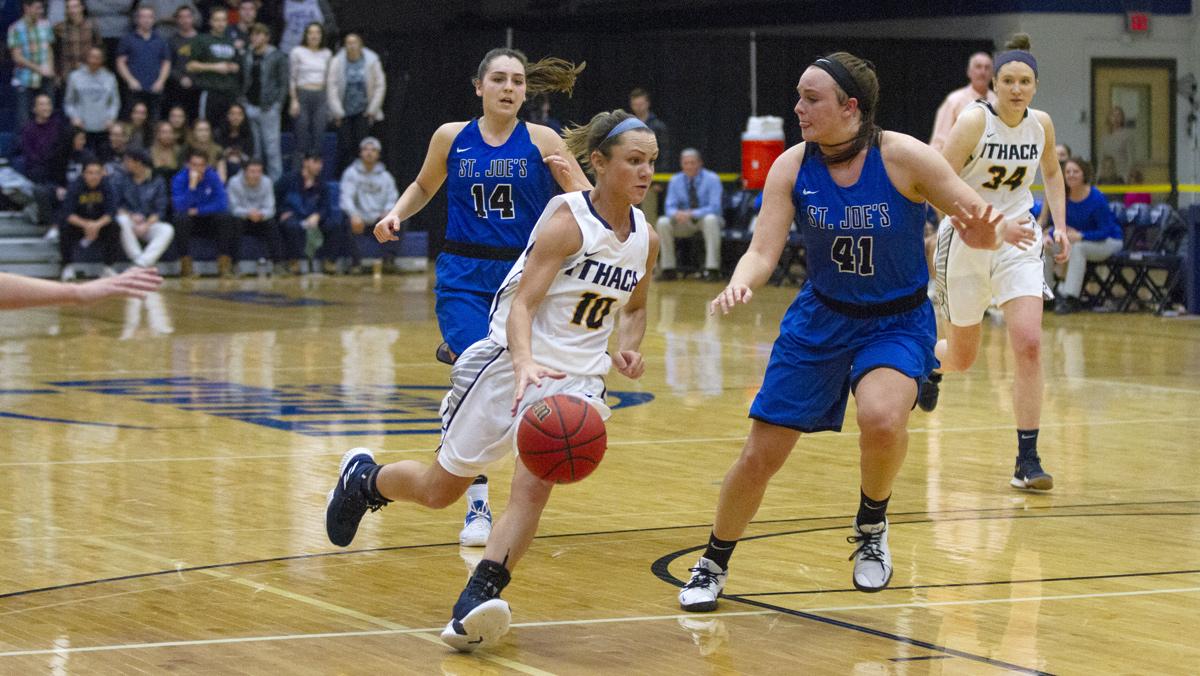 The Ithaca College women’s basketball team defeated the Saint Joseph’s College of Maine by a score of 74–63 to advance to the Sweet 16 in the Division III NCAA Tournament March 2 in Ben Light Gymnasium.

The game was dominated by the Blue and Gold the whole way through. One of the main reasons why was senior guard Annie Giannone. She set the tone early, scoring eight first-quarter points and adding in three assists in the first quarter.  At the end of the first, the Bombers were up 23–13.

St. Joe’s senior guard Kelsi McNamara, the Monks’ leading scorer, picked up three fouls in the first quarter. This limited her in the second quarter, as she played only 10 of the 20 minutes in the first half.

In the second quarter, with McNamara on the bench, the Bombers exploded for 27 points, going 9–15 from the field, including 4–8 from three point range. The South Hill squad took a commanding 21 point lead into halftime, leading 50–29. Giannone continued to dominate and posted an impressive first half stat line of 18 points and 6 assists.

In the first half, the bench players for the Bombers combined for 22 points, and the Blue and Gold defense forced 10 Monk turnovers.

The third quarter was when St. Joe’s found their rhythm. They outscored the Bombers 20–13. McNamara started to heat up, netting 13 points. However, the South Hill squad held onto a 14 point lead entering the final quarter.

At one point in the fourth, the Monks cut the deficit to nine, but it was too late for them to recover, as Giannone scored a layup with 48 seconds to go to put the Bombers up double figures and ultimately close out the game. Giannone finished with 22 points, 9 assists and 5 rebounds.

“We all played together tonight, it showed how well we read each other,” Giannone said. “Chemistry can make or break a team. For us it’s one through 15, we are all super close, and it translates on the court. My teammates are like family to me.”

This victory was head coach Dan Raymond’s 400th victory with the Bombers.

“The qualities of individuals that I have coached is why I’ve achieved this measure,” Raymond said.

Raymond was pleased that his team held the Monks to just 63 points, since St. Joe’s had averaged 78 their previous 29 games.

“Nobody pressed them like we did,” Coach Raymond said. “Looking back at their tape, we saw that their opponents never pressured them like we usually do. They couldn’t handle what we brought.”

Another key contributor for the Blue and Gold was junior guard, KellyAnne O’Reilly. She had 19 points and 5 rebounds, including several clutch shots down the stretch in the fourth. However, O’Reilly gave the credit to the rest of her squad.

“My teammates put me in great position to make those shots,” O’Reilly said. “They were the ones to set me up.”

The Bombers now advance to the Sweet 16 for the first time since the 2013-14 season and improve their record to 24–5. They will face off against DeSales University at 5 p.m. March 8 in Brunswick, Maine.