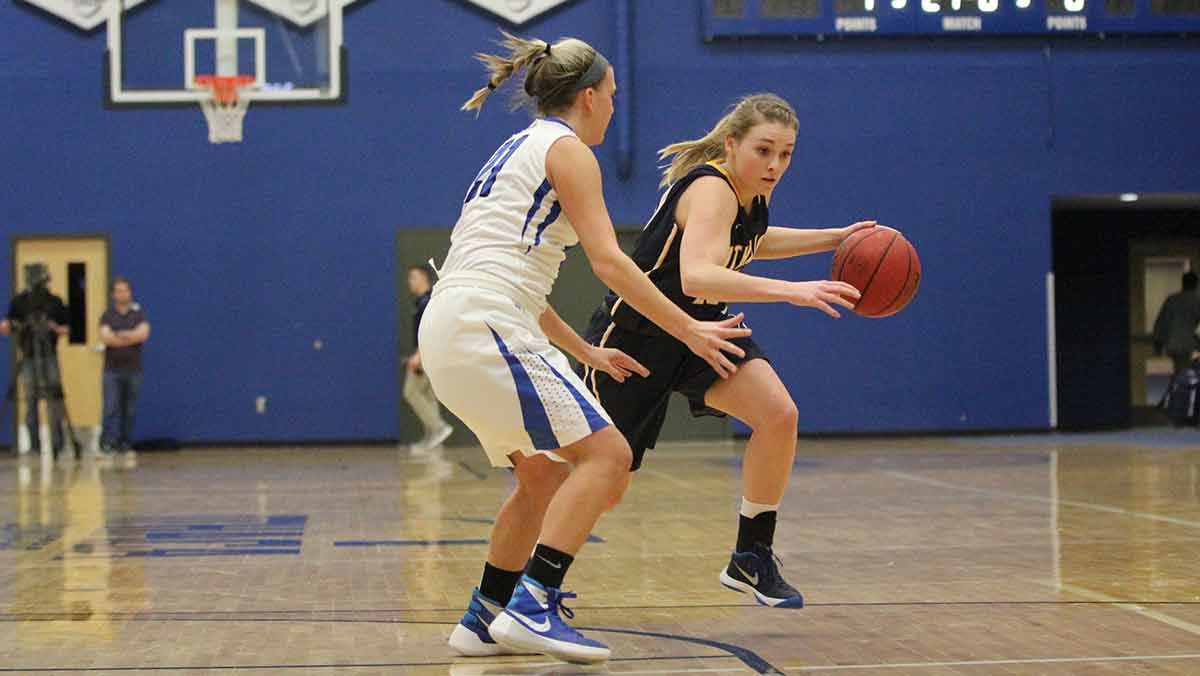 CAITIE IHRIG/The Ithacan
Sophomore guard Erin Woop drives past a defender Feb. 20 against Hartwick College. The Bombers clinched a spot in the Empire 8 Tournament with a 78–61 victory over the Hawks.
By Matt Hornick — Staff Writer
Published: February 21, 2016

The Ithaca College women’s basketball team secured its 15th win of the season Feb. 20 in its final regular season matchup, defeating Hartwick College by a score of 78–61. This win finalized the team’s regular season record at 15–10 and puts it in third place in the Empire 8 Conference.

It was senior day at the college, and the lone senior on the squad, Keri Steele, was honored before the game for her career as a Bomber.

Former starting point guard for the Blue and Gold Samantha Klie ’15 was in attendance for the game, and she said Steele was an indispensable teammate on the court.

“Keri was always an incredibly consistent player, and she was so great to play with because you knew she’d always play in a way that was beneficial to the team,” Klie said.

Once the game began, the South Hill squad came out cold as ice on offense. Hartwick held the Bombers scoreless for the first five minutes of the game until freshmen guards Allie Tunick and Annie Giannone were substituted into the action along with sophomore forward-guard Julie Yacovoni.

An immediate steal by Tunick led to a Giannone layup, making the score 9–2. Bombers’ head coach Dan Raymond said the performances those two players gave in this game and in the team’s previous few games have been the keys to their wins.

“You cannot quantify how important they have been for us as of late,” Raymond said. “Right now, we think Julie Yacovoni is playing as well as anyone in the conference.”

With that boost off of the bench, the Bombers were able to get on a roll and ended the first quarter only down 18–14. The team found its stride in the second quarter as shots started falling, including two 3-pointers each from sophomore guard Allison Spaschak and Tunick. The Blue and Gold took a 38–36 lead into halftime.

The third quarter began with the teams exchanging shots for the first few minutes until junior guard Ali Ricchiuti erupted for 14 of her 19 points, including three 3-pointers. She said after she made her first shot her confidence began to grow.

“After I saw the first shot go in, I started to feel good about myself, and my teammates kept encouraging me to keep shooting,” Ricchiuti said.

By the end of the third quarter, the Bombers were up 63–48 and held firmly onto that lead in the fourth quarter to secure the 78–61 victory. Hartwick head coach Katie Marcella said her team’s inability to score was the main factor in why they lost.

“We were unable to execute on the offensive end in the second half, and that really did us in,” Marcella said. “We haven’t learned how to play with a lead at times.”

Ricchiuti led the way for the South Hill squad with 19 points and seven rebounds, and she hit four 3-pointers on the day. Steele, in her final game in Ben Light Gymnasium, put up 11 points, and sophomore guard Jordan Beers was one rebound away from a double-double with 10 points and nine boards.

The Bombers will return to action in the Empire 8 Tournament at 8 p.m. Feb. 27 against St. John Fisher College in Hoboken, New Jersey, in Stevens Institute of Technology’s Walker Gymnasium.