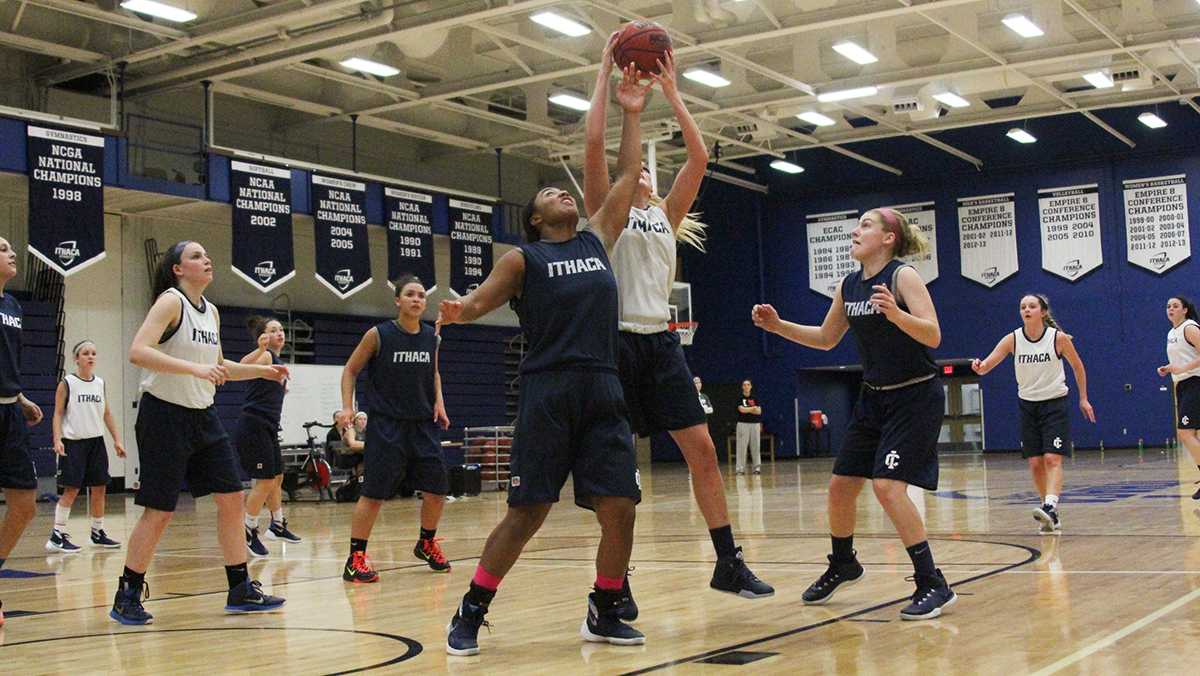 Coming off a season that resulted in a fourth straight Division III NCAA Tournament appearance, the women’s basketball team looks poised to continue its success in 2015–16. Despite graduating four seniors, the team has plenty of returning talent to make up for the losses.

Last season, the Bombers finished the season with a 23–6 record, while going 15–1 in Empire 8 play. The team had a strong veteran presence in the form of senior forwards Francesca Cotrupe ’15 and Geena Brady ’15, and guards Ally Mnich ’15 and Samantha Klie ’15.

Head coach Dan Raymond said this season’s returning players will need to step into not only bigger roles on the court, but also off the court as leaders.

“The roles the returning players need to fill include leading, teaching and mentoring the younger players, especially the first-year students, as well as increasing their production on the court in all statistical categories,” Raymond said.

Leadership will be a key theme stressed by the coaching staff, and the players have stepped up throughout the preseason.

Assistant coach Devin Shea ’13, who was recently hired in Summer 2015, said she is excited to see the team grow without a strong veteran presence due to the leadership it has gained.

“The fact that several of them are enrolled into the Leadership Academy shows that they understand the importance that it will play in having a successful season,” Shea said.

Junior guard Alex Gilligan said she believes the entire team is ready to step up after the loss of the seniors.

“Obviously, after losing seniors you lose some leadership, which I think the returners have realized that will be something that needs to be emphasized,” she said. “Our leadership this year will come from all classes, freshman to senior. We know that you don’t need to be a captain in order to be a leader.”

This season, the Blue and Gold will largely depend on the production from junior guard Ali Ricchiuti, as she averaged 11.1 points in 26.8 minutes per game last season. Ricchiuti also drained an impressive 37 percent of her 3-point attempts and should draw plenty of defenders on the perimeter.

However, Ricchiuti said she does have some improvements to make. The guard only shot 40 percent from the field last season and will need to improve upon that number now that the team’s second-leading scorer from last season, Mnich, has graduated.

“Some of the aspects of my game that I look to improve this year is being more consistent on offense and giving my teammates the best opportunity to be successful,” Ricchiuti said.

Shea said Ricchiuti will have no problem growing as an all-around threat.

“[Ricchiuti can] build upon the skills she already has in order to become a more difficult player to guard and scout against, but more importantly to continue to be a great teammate and to encourage and challenge everyone to elevate their games,” she said.

Along with Ricchiuti, senior guard Keri Steele will be depended on as one of the team’s primary scorers in her third season with the Bombers. Steele averaged a solid 8.9 points and 4.4 rebounds in 23.2 minutes per game, while making 48 percent of her shots from the field last season. The 5-foot-8 guard also shot 38 percent from deep, showing her range as a scorer.

Klie, the team’s primary playmaker last season, averaged 3.5 assists in 27.9 minutes per game, so the South Hill squad will need a new player to step up to take on point guard duties. No other player last season averaged more than 2.0 assists.

However, if Raymond decides he wants a pure point guard to run the offense, sophomore guard Jordan Beers may take on that role. In limited action last season, she only averaged 12.4 minutes in 27 games, and 1.1 assists, a statistic that should inflate as she earns more minutes.

Beers said the entire team will have to adapt to new roles.

“We all realize that our role is going to be bigger this year,” Beers said. “We all know we have to step it up, and we believe in each other that we can fill the spots of the graduating seniors.”

Raymond said several returning players can make a difference on the court this season and is pleased with how his first-year players have transitioned to the college game thus far.

“We are very early in the season, but to this point the first-year students are doing well, picking up on the differences between the high school and college games,” he said. “The veteran players are doing an excellent job of assisting the first-years’ transition to the college game.”