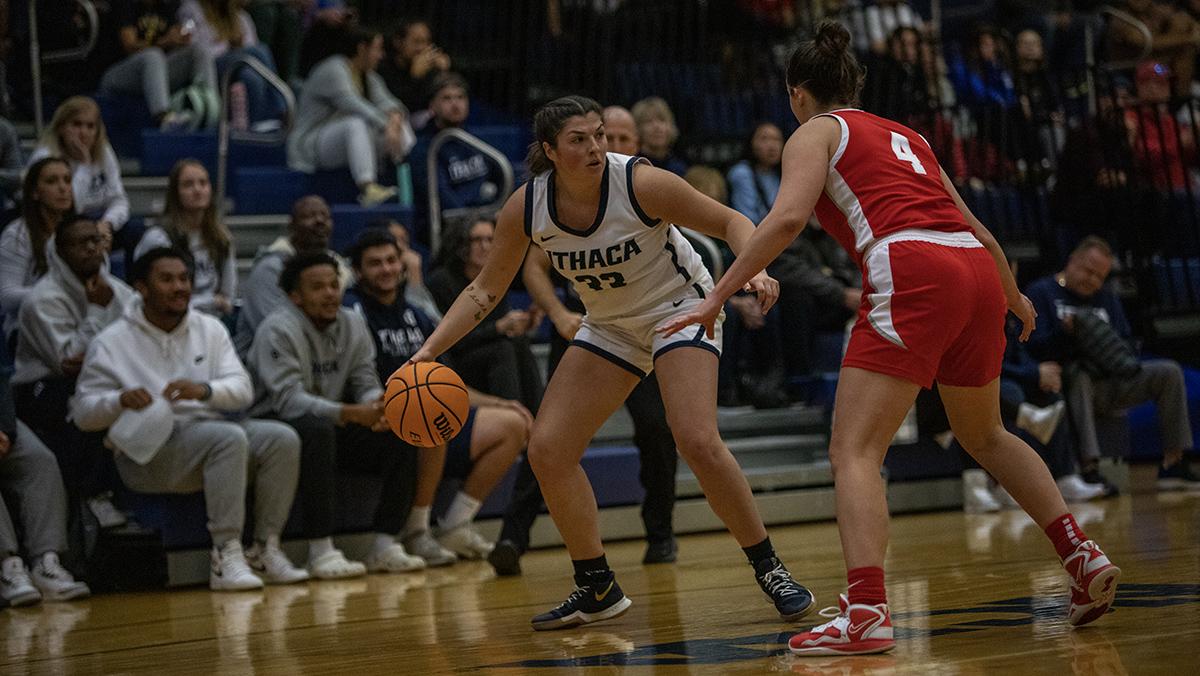 The Ithaca College women’s basketball team defeated the SUNY Cortland Red Dragons in a nail-biting overtime season opener by a final score of 64–55 in the Ben Light Gymnasium.

First-year student guard Zoraida Icabalceta was the star of the game, leading all scorers with 19 in her collegiate debut, 12 of which came on 3-pointers. Senior forward Emily Dorn added 14 points of her own in 31 minutes of action. The Bombers rode the strong play of their defense to victory, recording 13 steals in the game and forcing 22 Red Dragon turnovers.

The South Hill squad and Cortland were locked in a closely contested affair from the first few minutes. Senior Red Dragon forward Maggie Malone scored a layup on the game’s first possession, and the Bombers responded on the other end up a Dorn layup. Senior guard Emily Morano proceeded to knock down consecutive threes to extend Cortland’s lead to five in the first two minutes.

Cortland entered the halftime break up six, and its lead grew to 13 after the first few minutes after intermission. Malone connected on back to back 3-pointers to push Cortland’s lead to double digits, but the Bombers would answer with a 12-0 run to get within one, and the teams battled for the lead throughout the rest of the half.

Icabalceta made several clutch plays, including a 3-pointer to cut the lead to four with three minutes remaining. Dorn had a chance to win the game at the buzzer, but her shot came up short to force an extra frame. The Bombers dominated overtime, putting up 11 points while holding Cortland to a single basket.

Junior guard Hannah Polce spoke highly of the Bombers gameplan and execution down the stretch.

“I think our biggest emphasis in the final minutes and in OT was using our energy on defense to fuel our offense,” Polce said. “[Icabalceta] came in calm and collected, making huge shots and great passes towards the end of the game and in overtime.”

The Bombers will be back in action against Montclair State University at 5 p.m. Nov. 11 in Montclair, New Jersey.