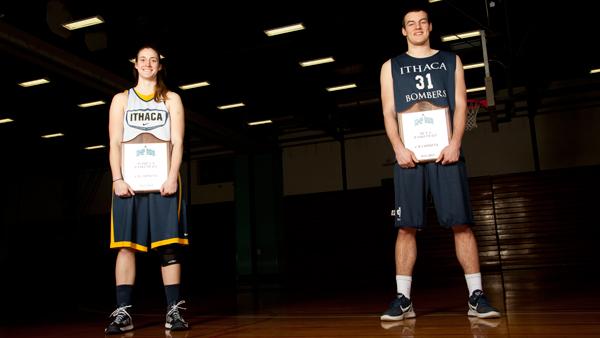 A strange female voice faintly echoed down the hallways of the Hill Center on Monday. The sound was coming from room 61, where several members of the women’s basketball team sat, waiting for the announcer to reveal their fate.

Eyes stared at the projector in front of the classroom, their faces expressing a mixture of anticipation and concentration. Though the Bombers did not know who their next opponent was or where they would play, they were certain they would be making an appearance at the Big Dance.

The wooden plaque hanging in Head Coach Dan Raymond’s office was their ticket, for the women’s basketball team was the Empire 8 Tournament Champion.

After finishing the regular season with a 23–2 overall record and going 13–1 in conference play, the Blue and Gold earned the No. 1 seed in the Empire 8 tournament. Their first matchup was against St. John Fisher on Friday, one of two teams to beat the Blue and Gold this season.

The loss to Fisher on Jan. 18 haunted the South Hill squad, but it has become added fuel to its desire to win a national championship. Sophomore forward Francesca Cotrupe said after dropping the regular season conference game, the Bombers vowed to never let it happen again.

“After we lost, the way we felt, we said we weren’t ever going to feel that way and watch another team celebrate by beating us,” Cotrupe said.

Going into the semifinal, senior forward Elizabeth Conti said the team was pumped to have a chance at redemption.

“Not only was it a tournament game but we just totally wanted to shut them down,” Conti said. “We didn’t even want them to think they could be on the same court as us.”

And the Bombers did shut down the Cardinals, winning the game 64-54 and tying the record for most wins in a single season.

After the win against the Cardinals, the team was pitted against Hartwick College for the tournament crown Saturday, a rematch of last year’s championship. Raymond said the players were ready to take on the Hawks, even though the atmosphere surrounding the game was intense.

“[There are] a few adjectives that come to mind, but the one that really stands out to me that the players displayed all weekend was determined,” Raymond said. “They just knew what needed to be done, and they were not going to be denied.”

The Bombers defended their title with a 47-29 victory over the Hawks and earned an at-large bid into the National Collegiate Athletic Association tournament. However, the squad did not rejoice much after the win. Many members of the team have said their journey is still far from over as they strive to reach the golden number 33 — the national championship game.

The clock informs everyone in Hill 61 that 10 minutes have passed since the beginning of the NCAA selection show. With half the bracket unveiled, the Bombers are still wondering where they fit into the playoff picture.

Some jokes are exchanged between players and coaches, but the room becomes quiet when the announcer returns from the break to reveal the other 32 teams in the tournament.

One by one, the empty blue animated spaces on the screen fill with the names of qualifying teams. Lebanon Valley… Baruch… Rochester… Scranton… Williams…

“Who are we gonna play?”

The Bombers would get their answers soon enough. The next grouping showed the Blue and Gold would be taking on the 23–5 Colby-Sawyer College Chargers in Gorham, Maine.

The South Hill squad was surprised to draw the Chargers, but the long journey to Southern Maine won’t faze them. Raymond said one of the great things about the NCAA tournament is the opportunity to travel to new places and play new opponents.

The Blue and Gold are six games shy of reaching the NCAA final. It will take everything they have to ensure they make it to Michigan for the Final Four, but Raymond believes this team has the potential because of its unselfishness.

Though the South Hill squad hasn’t faced any of the teams in its upcoming regional so far this season, Cotrupe said the Bombers are confident they can take on any foe.

“We knew after winning this weekend that the season wasn’t nearly over,” Cotrupe said. “We said it right after the game. We don’t expect it to be over this weekend, or the weekend after that. We’ll be at the national championship.”