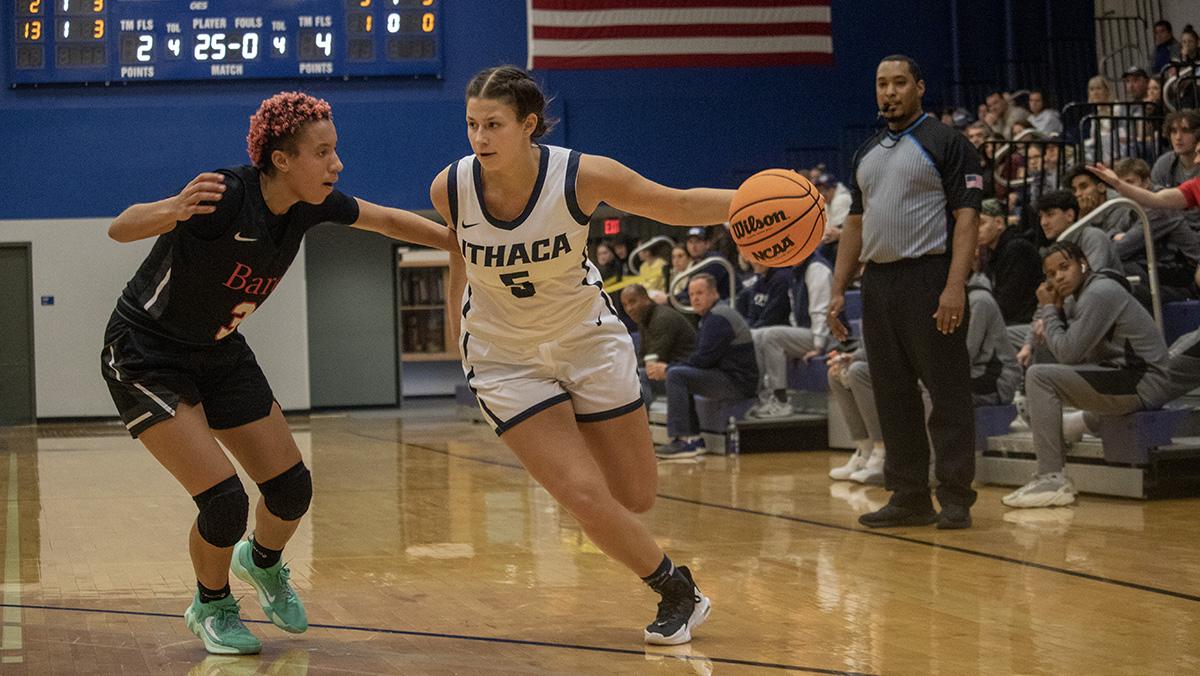 The Ithaca College women’s basketball team closed out its opening weekend of Liberty League play with a dominant 66–46 victory over the Bard College Raptors. The win brings the Bombers’ overall record to 6–1 and preserves their standing at the top of the conference.

The Bombers opened the competition with confident play from both inside the paint and beyond the arc. Led by senior guard Natalie Smith, the Bombers notched 13 unanswered points only four minutes into the quarter before the Raptors got onto the board. 12 Bombers saw time on the floor within the period, 10 of whom contributed to their 22–6 lead heading into the second quarter.

The Bombers pushed the pace in the second frame, facilitating outstanding ball movement to keep the Raptors working. Smith, alongside senior guard Camryn Coffey, continued to lead the team in points while sophomore forward Anya Watkins was a force inside the paint, earning five rebounds to keep the ball in Bomber possession.

Just under halfway into the frame, sophomore guard Isabella Mittelman netted the first 3-pointer of her collegiate career that had the bench on their feet, propelling the Bombers to a 40–16 lead heading into halftime. 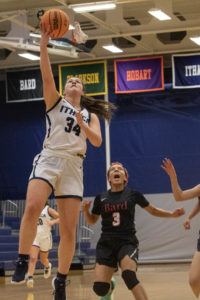 The Bombers’ starting five took the court to open the second half of competition, quickly seeing some impressive scoring plays from sophomore forward Annabella Yorio, who managed to put up five points within a 40-second window halfway through the quarter.

Smith continued to keep up the momentum, putting up four early points to earn the Bombers a lofty 55–28 lead heading into the fourth and final frame.

The Raptors worked to close the gap well into the fourth quarter, managing to hold the Bombers scoreless for the first four minutes of the frame. When they did get on the board, however, the Bombers were tough to stop. Mittelman was outstanding from beyond the arc, making the most of her 23 minutes with a career-high nine points.

Despite the Raptors putting up an impressive 18 points in the final frame, it was the Bombers who ultimately came out on top, securing a 66–46 victory to close out the game.

Mittelman, who finished the competition with the team’s best overall shooting percentage, said that she owes all of the credit for her breakout game to her teammates.

“I have such great role models on this team,” Mittelman said. “Watching them get on the court and absolutely crush it every single day is really what inspires me most.”

Mittelman continued that earning their first two Liberty League wins will grant the team some valuable momentum heading into their upcoming competitions, starting with the University of Rochester Yellowjackets.

“Regardless of who is on the court, we’re always going to show up,” Mittelman said. “Rochester is a really good team, but so are we and I’m excited to prove that.”

The Bombers will get back on the road when they take on the Yellowjackets in Rochester at 6 p.m. Dec. 7.

Tess Ferguson can be reached at tferguson1@ithaca.edu or via Twitter: @tessferg