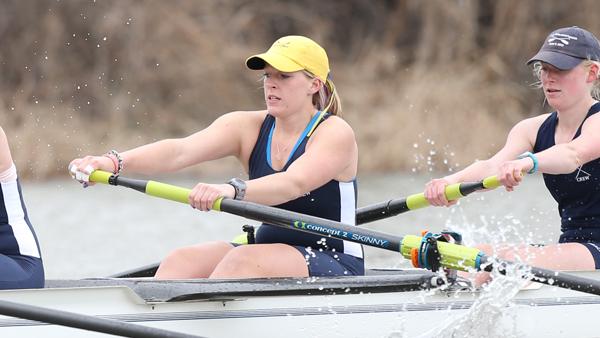 At the last home race of the spring crew season on Saturday, seniors from the women’s team gathered on the long wooden docks, which they launch off of before every practice. It is a dock that signifies a home and a commitment to something bigger than the sport, to a team that to its members is a family.

The seniors took off their shoes and socks and joined hands near the edge of the frigid gray water. They counted together, took two big steps and jumped. Suspended in the air for a moment, they fell and hit the water with a splash. No one wasted a moment before climbing back up on the dock. This moment signifies four years of hard work and dedication to a team and adds an event to the seniors’ careers that they will never forget.

This year, the Ithaca College women’s crew team is graduating 11 seniors. Many have been rowing prior to coming to college, but others were novices with no rowing experience before their first year in the program. Either way, these 11 women have been dedicated to the crew team and have become leaders in the boats.

Coach Becky Robinson said it is the seniors’ leadership that has always driven the women’s crew team. Though the team is losing 11 team leaders, Robinson said the team will be able to still be successful as the younger team members step up.

Senior Regina Wuest , cocaptain of the team, came to Ithaca with no prior rowing experience. She and a friend tried out because, like many other women who decide to row, they wanted to gain a new experience. Wuest ended up loving the sport and has stuck with it throughout her four years.

“The things we’ve done as a team while I’ve been captain and just how our season has been going so far this fall and spring have been awesome,” Wuest said. “It looks good for the team, and it means that I’ve been able to step up to the position and that I’ve been confident in what I’m doing.

Wuest’s teammates, seniors Allison Carter and Lizzie Kirst, both had prior rowing experience. Carter rowed for four years in high school and was a coxswain all four years at Ithaca. Kirst began her rowing career her junior year of high school because her sister had rowed. She fell in love in her final two years at Darien High School and decided to continue rowing at Ithaca.

Both Carter and Kirst said their passion for rowing was amplified by the relationships that are created while rowing. The family-like atmosphere of the team provided them both with a way to integrate themselves into college life.

“I wanted to continue rowing in college, because in high school [my team] had become such a family for me,” Carter said, “I wanted to have that same experience.”

The 11 seniors have all taken leadership positions throughout their four years on the team, whether it be in their boat or on land, for their younger teammates, whose rowing careers are just beginning. Coach Robinson said either way the seniors leadership will inspire future team leaders.

“Our team will lose some of our best rowers, but we have ladies who are ready to step up and fill their shoes,” Wuest said, “The talent the younger rowers have can be seen in how hard they work now, and they will, without a doubt, do their best to keep the team as strong as possible.”

Freshman Emma Behrens joined the crew team in the fall as a novice rower. She said the seniors have acted as role models for her and other younger rowers and have really encouraged them to stay with the team.

“The biggest thing that they did is in the very beginning they were really motivating us, because we were all doing the hardest workouts we’ve ever done in our lives,” Behrens said, “Having them there motivating us, telling us, you know, ‘Think about how fit you’re going to be in the spring’ and things like that was really helpful.”

The end of college not only marks these seniors’ transition into the real world, but they are also leaving behind teammates and friends.

“We’ve had some good years together, and I’m excited to finish out the rest of the season,” Kirst said, “It’s been really fun and really great having the support throughout it all.”