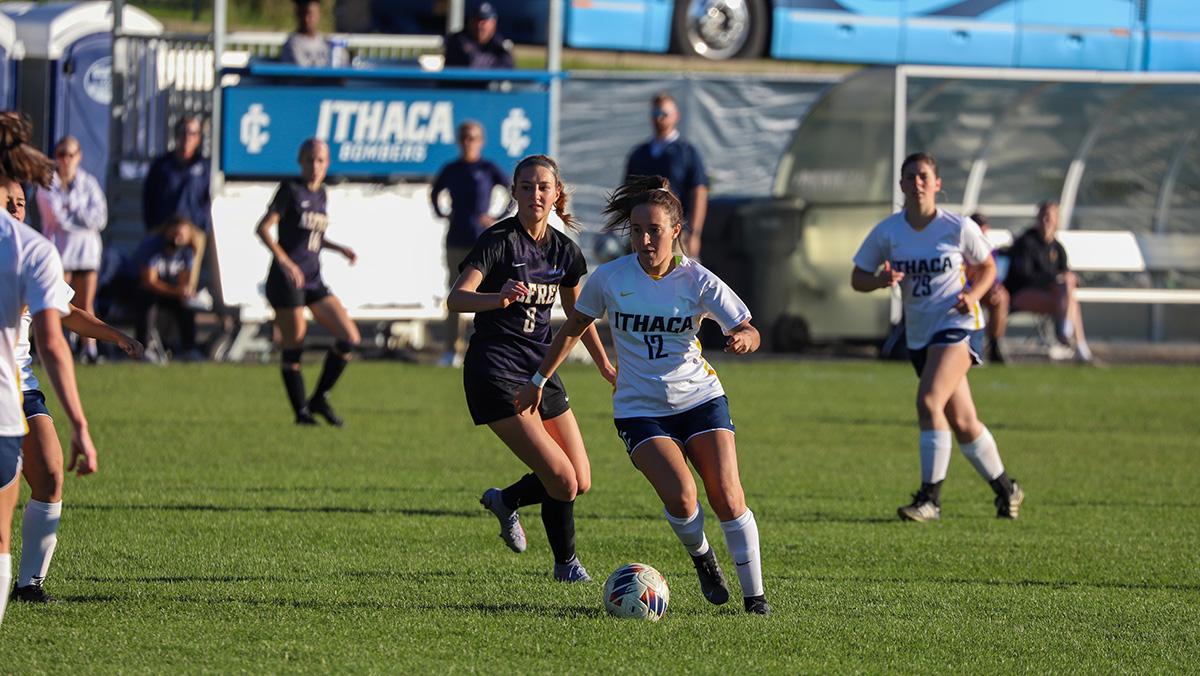 The Ithaca College women’s soccer team defeated the Alfred University Saxons, 2–0 Oct. 5 at Carp Wood Field. The Bombers poured on the pressure throughout the game, finishing the game with 17 shots, but only two goals to show for it.

The first big moment of the game was a save by Saxons first-year goalkeeper Kiani Barnard-Pratt in the 14th minute. Bombers graduate student midfielder Megan Buttinger had only the goalkeeper to beat on a breakaway, but Barnard-Pratt came out of her goal to make the save.

From there, the opportunities kept coming for the Bombers, but with no goals to show for it. In the first 30 minutes of the game, the Bombers earned 10 corners and had taken 10 shots on goal, forcing nine saves from the Saxons goalkeeper and a goal-line clearance from a defender. 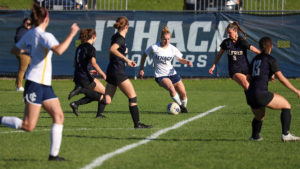 Bombers’ junior forward Rosie Bostian had the best chance of the half, seeing two shots get saved from short distance. Bostian attempted to hit first-year midfielder Kaelyn Fernandez with a cross but hit it right at the goalkeeper. However, the ball deflected right back to Bostian, and the goalkeeper sprawled up to make a second save.

The big breakthrough came in the 41st minute from junior midfielder Ally Stanton. Stanton went on a solo run, dribbling through defenders from midfield to the top of the box. Two defenders closed her down, but Stanton won the ball back and ripped a shot that beat the keeper.

The Bombers doubled its lead early in the second half through Buttinger. Senior forward Delaney Rutan beat her defender off the dribble, crossing the ball into Stanton who flicked the ball to Buttinger who was waiting at the back post with a wide open goal.

The Bombers created a few more chances at goal, but nobody could net a third goal. Defensively, the Bombers looked great as the Saxons could not find a way through the back line. The Saxons finished with just one shot in the game and none on target, allowing for an easy day for junior goalkeeper Claire Reader.

Stanton, who scored an assist, said the team was excited to get a win in its last non-conference game and believes the team is pushing through their tough part of the season.

“[The win] was a good stepping stone for our team,” Stanton said. “We’re feeling good. It’s been a tough stretch mentally, but we’re ready and working hard every day.”

The Bombers have won two straight games since falling to fifth-ranked William Smith and are now 7–2–2 on the season.