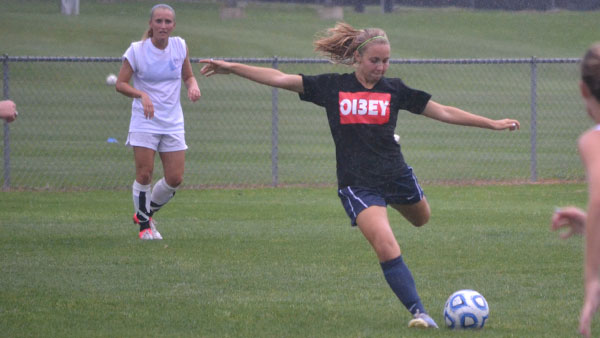 Every morning at 6 a.m., the women’s soccer team rolls out of bed. The players don T-shirts and running shorts then head to the track for a 7 a.m. workout where they run, stretch and exercise their cores. Afterwards, they eat breakfast as a team and then report back to the field at 9:30 a.m., where they run drills and scrimmage for two hours.

After a team lunch, the players have a few hours of downtime before heading back to the field at 3 p.m. for their third and final workout of the day. There, they work on defense and scrimmage more before dinner — which they, of course, eat as a team.

Such has been the 13 days of the preseason for the Bombers, who began training as a team on Aug. 17. The returning upperclassmen know what to expect out of the training, but for the first-year players it is a completely new experience.

Freshman Jessica Demczar, who is one of 13 first-year players who tried out for the team, said the preseason workouts have pushed her both mentally and physically. She said the fitness tests, which the team did during the first five days of preseason in lieu of its morning practice, have been the most difficult part.

“There’s five fitness tests, so we do one a day,” Demczar said. “You have to push yourself through it all the time. It’s a lot of work.”

The fitness tests include a shuttle run test, a push-up test, a 100-yard sprint test, an arrowhead agility test and the Cooper test. Sophomore Kristina Buhagiar said the Cooper test, which involves running as many laps around the track as possible in 12 minutes, was the most challenging.

Even for the returning players, the preseason has brought challenges. Buhagiar said adjusting to multiple workouts every day was one of the most difficult aspects.

“The first three days, you’re the sorest, and pushing through that is pretty hard,” Buhagiar said. “But once you get over the hump, the soreness goes away, and it’s easier to focus on playing soccer.”

For the Blue and Gold, the advantages of such an intensive preseason far outweigh the disadvantages. Because the team spends essentially all of its time together, it forms a strong bond both on and off the field that helps when the games begin.

According to head coach Mindy Quigg, having two alumni assistant coaches has allowed the team to bond more off the field. She added that the senior class has also been instrumental in organizing team-building activities.

Demczar said her older teammates immediately made her feel comfortable and welcome both at workouts and off the field.

“Getting to know the girls has been my favorite part [of preseason],” Demczar said. “I really love everyone on the team, and the upperclassmen have been so nice.”

“Every session we are learning more about one another and learning how we are going to play,” Quigg said. “We are learning what our strengths and weaknesses are, and I feel pretty good about where we are right now.”

For Quigg, the preseason is essentially one big tryout for both the returning players and the newcomers. During the week-and-a-half of workouts, she must whittle the roster down before the team’s first game on Aug. 30.

“We have a lot of depth this year,” Quigg said. “We haven’t made our final cuts, and that’s always the most difficult part for me. We have a lot of talent and only have a certain number of jerseys to fill.”

Buhagiar said the possibility of cuts is always looming even though her primary focus is becoming a better player in practice.

“I think that in the back of our minds we always know there’s that possibility, especially for the newer players,” she said. “It pushes us to work harder.”

Despite the demands of preseason, the players gain experience and knowledge about themselves, their teammates and how to play the game with endurance.

“It has given me a lot of confidence on the ball and moving off the ball and calling for the ball,” Demczar said of her preseason training. “I know that I have the confidence because my teammates are going to be there supporting me.”