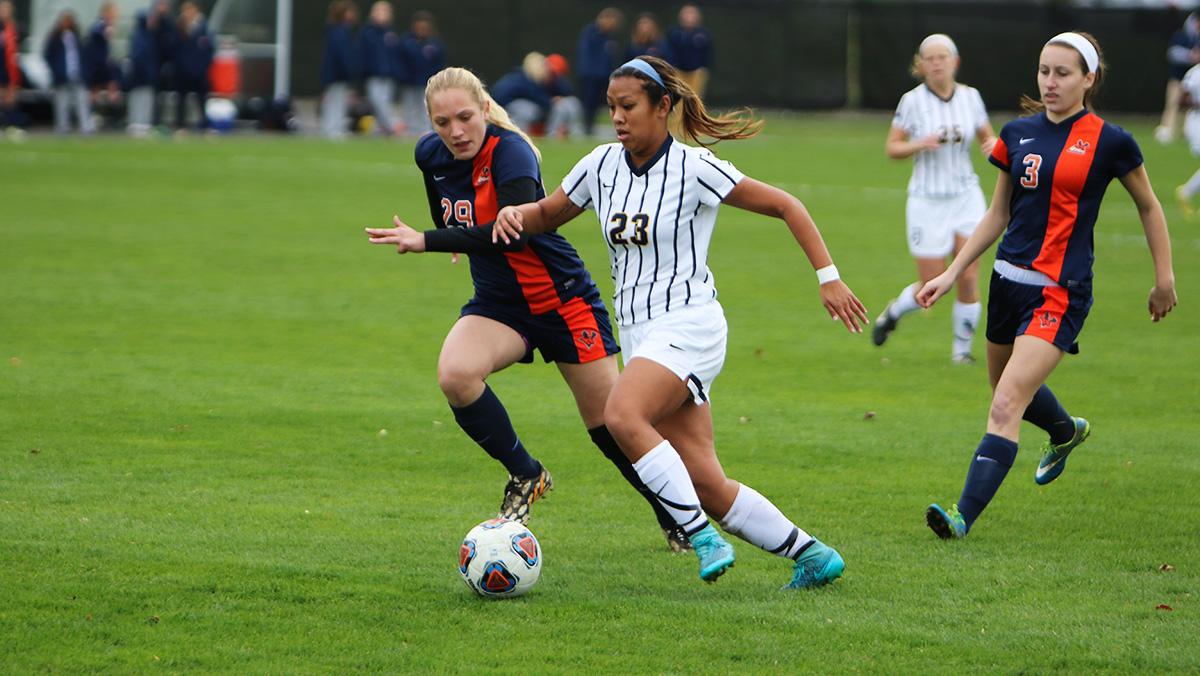 The Ithaca College women’s soccer team showed up to play for its seniors and gained an impressive 4–0 win over the Utica College Pioneers on Oct. 31 at Carp Wood Field.

With the victory, the Bombers expanded their winning streak to 11 games and moved their record to 12–3–2 on the season and 6–0–2 in the Empire 8 conference. This game marks the end of the regular season for the team, which now awaits its schedule for post-season play.

A strong all-around game was played by the Bombers, with every healthy player seeing minutes on the field.

Junior goalie Karen Macke said the team definitely wanted to win the game for the seniors.

“I think it was a great way to end our season,” Macke said. “Everyone was able to play and make an impact on the field, which will definitely help us in post-season.”

Scoring was opened up by junior midfielder Taylor Baranowsky in the ninth minute of the match off of a corner kick from classmate forward Holly Niemiec.

The Bombers yet again found the back of the net in the 34th minute with a goal from just inside the 18-yard box from freshman forward Sarah Pirnie.

Pirnie, who recorded her first goal as a Bomber, said she was pleased to finally get on the board.

“It was nice to get my first goal for team on Senior Day,” she said. “It meant a lot to me to score for all of the seniors.”

Early in the second half, the South Hill squad yet again capitalized when senior forward Kelsey King found junior forward Megan Nash open inside of the box. Nash would one time the ball into the upper right hand corner of the net.

The final goal of the game was scored in the 58th minute by King off of an assist from junior forward Jocelyn Ravesi. Ravesi had a breakaway up the right hand side and King was able to receive the ball of a Utica defender and find the net. This was King’s ninth goal of the year –– a team high.

The Bombers recorded a season-high shot record as they outshot the Pioneers 43–6.

Pioneer freshman midfielder AnnaLisa MacPhee said her team did not play as they wished they had hoped to in the match.

“I think we played well. We just didn’t connect the way that we normally do,” MacPhee said.

This game marks the end of the Pioneers season as the Bombers move into post-season play awaiting their seeding for Empire 8 conference playoffs. If the Bombers are able to clinch the first seed in the Empire 8, then they will play their first playoff game at Carp Wood Field.