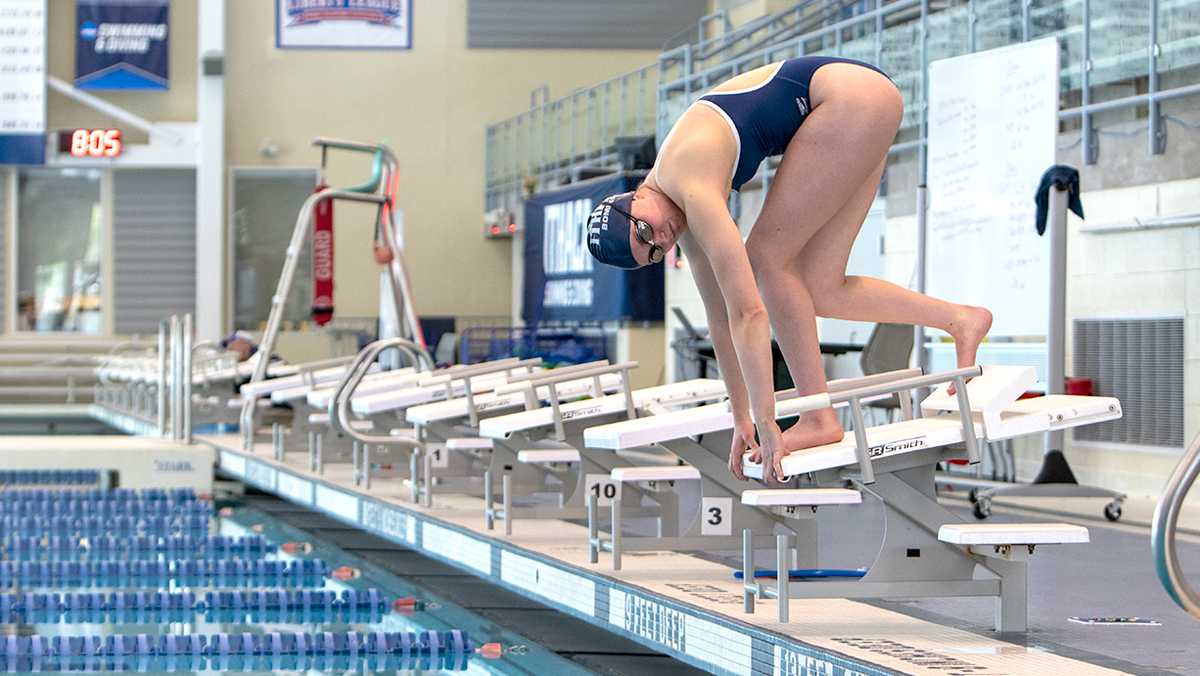 After making a splash in their first season in the Liberty League Conference, the Ithaca College women’s swimming and diving team is striving toward a conference championship.

Returning players and coaches for the Blue and Gold described last season as a rebuilding year, as they lost 12 seniors from 2016–17 season. Despite the big hit to its roster, the team was able to produce a strong second–place finish at its first Liberty League Championships with a score of 1,436, only 50 points behind first–place finisher Rensselaer Polytechnic Institute.

The biggest contributor to the Bombers’ success in 2017–18 was a stacked diving team. At the league championships, the South Hill squad claimed 6 of the top 8 spots in the 3–meter dive and 5 out of 8 in the 1–meter dive. Nickie Griesemer ’18 took first place in the two events and went on to become an NCAA Division III national champion in both as well. Griesmer was the first diver from the college to win a national championship.

Despite losing so many talented athletes, head coach Paula Miller named diving as the program’s greatest strength this year. The key to keeping the squad strong is graduate student Anna Belson. Belson is the only remaining member of the group who competed at the national championships in 2018, and she earned two Honorable Mention All-American honors with her 12th–place finish in the 3–meter dive and her 13th–place finish in the 1–meter dive.

“My goal is to go back to nationals for the fourth time and make finals on both boards,” Belson said. “I’ve always been able to represent Ithaca there, and I really hope to bring other people with me as well.”

No one currently on the squad, except for Belson, has taken the trip to nationals, and, of the five divers on the roster, she is the only athlete with more than a year of collegiate diving experience. Despite having such a new group, Chris Griffin, assistant coordinator and aquatics coaching assistant, is optimistic about the team’s future.

“We have a very talented sophomore, Jocelyn Pawcio, who’s still on the team, and we have three really strong up and coming individuals,” Griffin said. “There’s Ava Lowell, who transferred over from the gymnastics team, we have Malia Farrar, who was already on campus, and we found out she had some diving history, and we have a freshman, Samantha Lanzafame, who was a very good diver in high school.”

Pawcio, like Lowell, came from a gymnastics background and dove competitively for the first time during the 2017–18 season. She placed seventh at the Liberty League Championships in the 3–meter dive and qualified for the NCAA Regional Championship. She will look to book her ticket to the main event with Belson this time around.

Belson echoed Griffin’s high hopes for the young squad, comparing it to her own experience.

“When the five of us who went to nationals arrived as freshmen, we were terrible,” Belson said. “We just didn’t have a lot of talent but our program is so good, and how we ended is a reflection of how great the coaching staff and everyone down to the athletic trainers is at helping us grow. It’s cool to see that start over again.”

Miller said that she is trying to ramp up the pace in workouts and that the new group of freshman is contributing to that process.

“The ultimate goal of the team is to win conference championships,” Miller said. “The freshmen really have bought into the program. We’ve already done sets that have been very exciting — faster, more intensity right away.”

Senior captain Jaclyn Pecze also has the potential for a big year. The highlight of her 2017–18 season was a third–place finish at Liberty Leagues in the 100–yard butterfly. Like Hoffman-Smith, she will be chasing a school record in the 100 fly. Pecze, however, has the same tunnel vision on a team victory in the Liberty League as her coach does.

“I’m excited to see how far we can go and what we can accomplish,” Pecze said. “With a new team, the sky’s the limit, so, right now, we’re focused on pushing each other to our absolute best at practice, and we’ll see what happens in the postseason.

Miller said that the team’s being young does not mean it does not have experience; it means it has potential. Whether between the lane lines or on the boards, the swimming and diving team will look to capitalize on all of its untapped talent this season.

“I never say we will never make it because I love exceptions to the rule,” Miller said. “Everyone’s working hard and showing a lot of promise. I’m very excited for the season to begin.”