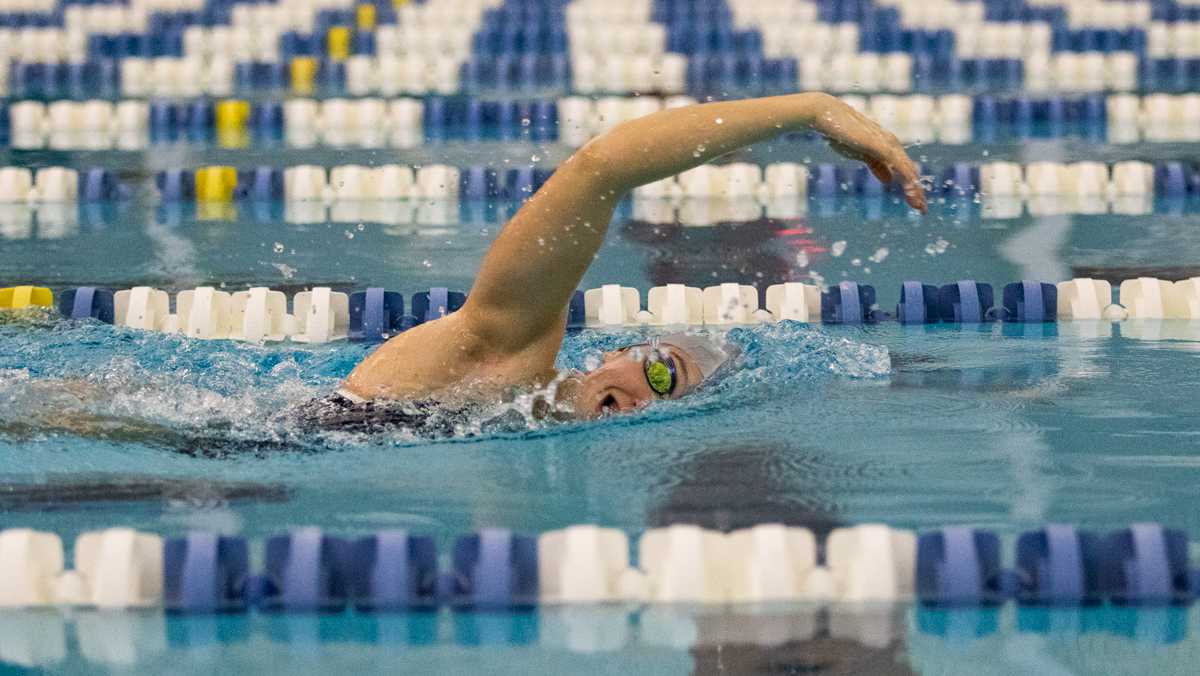 Despite adding 15 freshman athletes to its roster, the Ithaca College women’s swimming and diving team is anything but inexperienced. The team is gearing up to defend its Liberty League championship title.

The South Hill squad has set its goals high for the season after winning its first Liberty League championship in program history last year. Senior swimmer Angelina Domena said they are striving for a more dominant victory this year.

“We won by literally a fingernail, by 2.5 points,” Domena said. “Although we won, I think that we want to have a bigger league, which motivates us even more.”

Domena said she believes having a new class with so much potential and having strong returners will bring the team back to the conference championship.

“I personally didn’t realize the talent that they all had,” Domena said. “Being a senior and looking at this freshman class, I’m thinking, ‘Wow, we have so much talent here that is going to take us so far.’”

The Class of 2023 has already begun to contribute to the South Hill squad in its first three wins of the season. Five freshman athletes notched first–place finishes for the Bombers, including freshman Jane Pfeufer, who took first in three races.

Head coach Paula Miller said the coaches used the first meet against SUNY Fredonia, The College at Brockport and Buffalo State on Oct. 19 as a chance to see where the team’s strengths are, so they were able to put many freshmen in the lineup. She said she is excited to see the potential of this class, especially from freshmen Katie Krom and identical twins Anna and Olivia Rubino.

A class of 10 seniors will also contribute to the Bombers’ success this season, not only in the pool but in leadership as well. Domena said that she has seen the team’s culture improve significantly since her freshman year and that it has become more about building camaraderie and a positive environment.

“I think that the experiences that we’ve had in the past, such as having to speak up when we don’t think the environment’s great, have made us really proactive about that,” Domena said. “I really want the freshmen to view our senior class as people that they look up to and people that they want to emulate.”

Miller said she expects to see strong performances from senior Paige Landers, senior Kaitlyn Scott, junior Morgan Hoffman-Smith and sophomore Jesse Ford. She also said that more emphasis is going to be placed on the sophomore class to perform this year because of last season’s large graduating class.

Hoffman-Smith had an accolade-filled 2018–19 season, breaking the college’s record in the 1,650-yard freestyle race and placing in the top four in five different events at the Liberty League championship meet. Landers contributed to three different relay races that also finished in the top four at the conference championship. Scott was also a multiple-event athlete for the team, competing in freestyle, backstroke, butterfly and individual medley.

Senior Amanda Giarratano is the lone senior diver on the women’s team, but she said she feels that the whole group contributes to maintaining the team’s cohesive environment and work rate.

“I’m the only senior, but our returners guide the whole diving team as well,” Giarratano said.

I’m glad it’s not just me leading the team and that I have them to fall back on.”

Junior diver Jocelyn Pawcio, who earned her first All-American honor of her career last season, will not compete this year because she is studying abroad and redshirting the season. The Bombers will also have to fill the shoes of Anna Belson ’19, a graduate student who placed third in the NCAA Division III national championships on the 3-meter board last season.

The dive team has three freshmen joining them, including Eliana Wollock, who placed first in the 1-meter dive in the first meet of the season. Junior Lindsey Duhamel is also new to the squad after switching to diving from women’s soccer.

“We potentially have up to five new divers who have never stepped foot on the board before, so we are doing a lot of building mechanics,” diving coach Chris Griffin said. “It’s great for the returning divers to go back to basics to build and enhance that foundation.”

The Bombers will be back in action for the Ithaca Bomber Invitational from Dec. 6 to 8 at Kelsey Partridge Bird Natatorium.