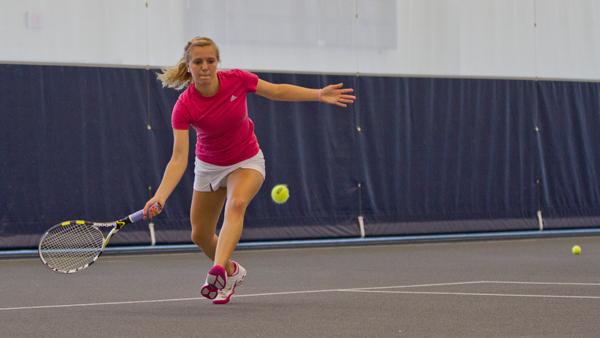 Amelia Marino/The Ithacan
Sophomore Alyssa Steinweis sets up for a forehand during her singles match vs. St. John Fisher College on Saturday in the Athletic and Events Center.
By Kristen Gowdy — Staff Writer
Published: October 8, 2012

The women’s tennis team improved to 7–0 in the Empire 8 Conference play and 8–0 overall as it defeated St. John Fisher College 9-0 Saturday in the Athletics and Events Center.

Both teams had depleted rosters because of injuries, and the Bombers were forced to rearrange their lineup from their usual order.

The most notable changes were in the doubles teams. With senior Allison Young on the sidelines because of a back injury, senior Laurel Salladay stepped up and played in the first doubles match with Young’s partner, senior Cristina Nunez.

This marked the first time that Nunez and Salladay had played together in a doubles match. Salladay said the pair only had one chance to practice together before the match.

The lack of practice didn’t appear to affect the pair. Nunez and Salladay came back from a 1-0 early deficit in the set to defeat Fisher’s top duo, junior Katie Pasier and senior Jenna Lehner 8-3.

“There were some ups and downs, but we got it done,” Salladay said after the match. “We focused on sticking with the basics: nice cross court shots, keeping them deep — just the basics.”

The win was huge for Gittleman and Hedrich, who don’t normally see action in doubles matches. Gittleman said the most the pair had played in together before the Fisher match were a few consolation matches. After the match, Head Coach William Austin expressed how happy he was with the way the duo played.

“I was really proud of Amy and Megan for coming through,” said Austin. “They were very nervous at first, but they steadied those nerves and came through. This was a great opportunity for them.”

Gittleman said the key to the win was figuring out their opponent’s strategy and playing it to their advantage.

“We noticed that their serves weren’t as hard, so we could run up to the net instead of staying back. That really helped with our game,” Gittleman said.

The Bombers were also successful in the five singles matches. Because Fisher only brought five players to the match, the Blue and Gold automatically received two default points, which was the reason for the unusually low number of matches.

Nunez, sophomore Allison Vizgaitis, sophomore Carly Siegel, sophomore Kelly Fishback and sophomore Alyssa Steinweis all won their singles matches with ease. Both Siegel and Vizgaitis swept their Fisher opponents 6-0, 6-0, and Nunez dropped just one game in her match, beating Pasier 6-1, 6-0. Fishback defeated Duquette 6-1, 6-1, and Steinweis beat Cornacchia in the closest match of the day by a score of 7-6 (4), 6-1.

The Bombers will begin preparing for next weekend’s New York State Championships, which they will host on Wheeler Tennis Courts.