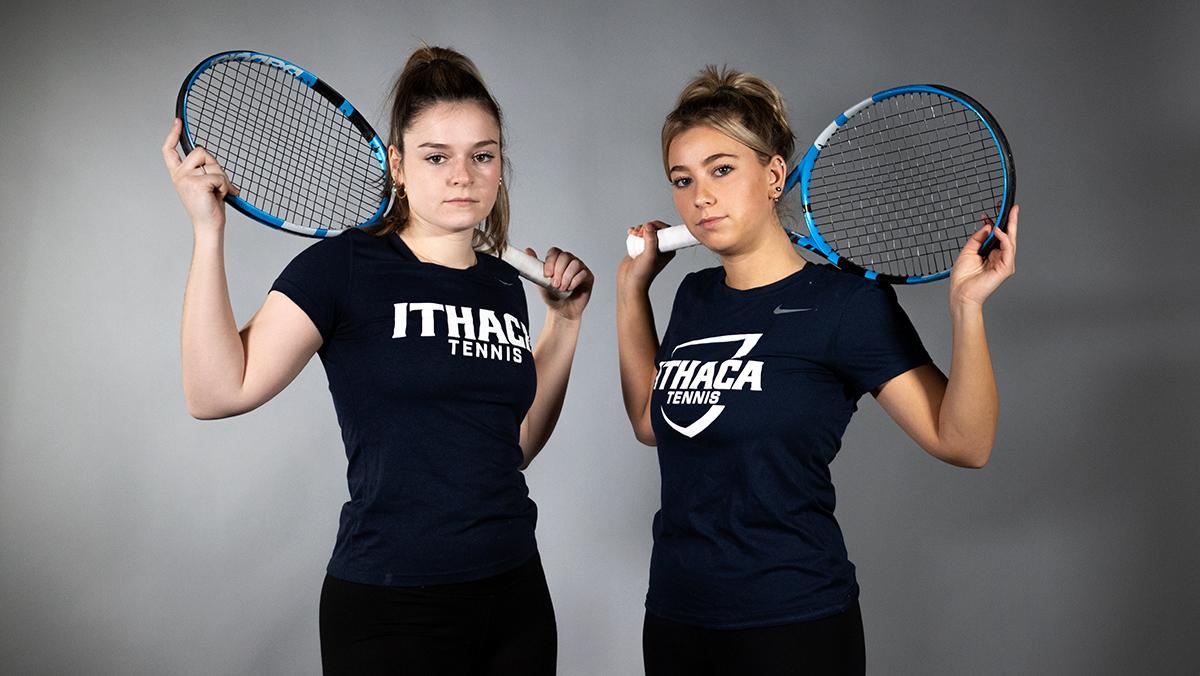 Brendan Iannucci/The Ithacan
From left, juniors Rebecca Andrews and Zoe Davis, the captains of the Ithaca College women's tennis team. The team has been mentally preparing for the season by holding sessions with sports psychology students at the college.
By Ori Grady — Staff Writer
Published: March 3, 2022

The Ithaca College women’s tennis team is hard at work, gearing up for the start of its upcoming season. It will be its first complete season since the 2019 outing, which means there are lots of new faces ready to compete for the first time.

Out of the 15 players on the roster, six are freshmen, but there is still the necessary core leadership from the rest of the upperclassmen on the team. The team finished the shortened Spring 2021 eight-game season at 2–6 but is expecting much better results this year, especially after promising preseason practices.

Chris Hayes ’16, head coach of both the men’s and women’s tennis teams, said he is excited for the season to begin and has aspirations for each player on the talented roster. He recognizes the new talent on the team and the necessary work the team needs to do to keep on improving.

“We’ve got a really strong group of women,” Hayes said. “A lot of upperclassmen, a great freshman class, as well as one of the bigger rosters we’ve had in recent memory.”

Juniors Rebecca Andrews and Zoe Davis, the team’s captains, said they have been very impressed by the new members and how well they have been able to adjust to the collegiate level during the offseason and first few weeks of practice. During the winter break, the team was able to build chemistry both on and off the court, whether it was enjoying team dinners or dueling each other for fun in practice matches.

“It’s really a great atmosphere that we have going on right now,” Andrews said. “Everyone has been hitting as much as possible during practice six days a week.”

Davis is also ready to give full effort all season long and said she has been motivated by the strong effort she sees every other player sacrificing to make the team as successful as possible. She wants to enjoy the time with her teammates, but most importantly, she wants to win.

“I want everyone to give 100% every match and more,” Davis said. “I want them to feel comfortable on the team because I think that produces the best results.”

After arriving back on campus post-winter break, Andrews said the team has been lifting and conditioning to get ready for the season. However, she said it has been spending the most time with “challenge matches,” which determine the singles positions for matches. Andrews admitted that competing against her own teammates for roster positions is not the easiest.

“Our sport is a little difficult because we do play each other for our spots on the team,” Andrews said. “They tend to get a little heated.”

The intense competitiveness in practices shows how determined each player is to perform at their highest level. Because of the instant bond of the team, the teammates are not afraid to let their competitive sides shine. Hayes has enjoyed every practice due to this and is especially excited for freshman Taylor Crain, who has made a mark on the team since day one of training.

Hayes said he expects her to play at the one spot for singles matches, which means she will be playing against the other team’s best singles player. This is an incredible accomplishment for a freshman.

Besides the “challenge matches,” which help prepare each player for the high intensity of game day matches, the team has been highly focusing on its mental preparation together. Tennis is a game that requires just as many mental strategies as physical. In fact, Hayes believes mental awareness will be key in the success of the team this year.

“90% of our sport is really mental, while the other 10% is physical,” Hayes said. “We’ve also been working with sports psychology students last semester with different strategies that we can use on the court.”

Davis, like Hayes, understands the importance of staying mentally ready and knows that team success will come when the team is connected together under the same mental umbrella.

“We’ll hype each other up, talk between courts and try to keep the energy up and stay positive,” Davis said. “You can definitely get down on yourself if you’re just in your own world.”

The entire team also has clear goals for the upcoming season. The Liberty League playoffs have been out of reach for it in the past, having never been able to finish higher than the top five since joining the conference in 2017. This year, Davis said the team expects to make some noise against rivals like Skidmore College and Union College.

“Skidmore is always a challenging team, but I’m really excited to play Union,” Davis said. “It’s a good atmosphere when we play against them.”

Similarly to Davis, Hayes is all about getting better day by day but will definitely be aware of the upcoming standings and matchups leading into the Liberty League playoffs now. He sees his team making a deep run this year.

The pieces are in place for the team to be one of the more successful ones in recent program history. The Bombers began their season Feb. 19 against Wilkes University with an 8–1 win, but with plenty more time before the Liberty League tournament, it could be an exciting team to watch.

Women’s tennis vying NCAA bid with a bounce back year