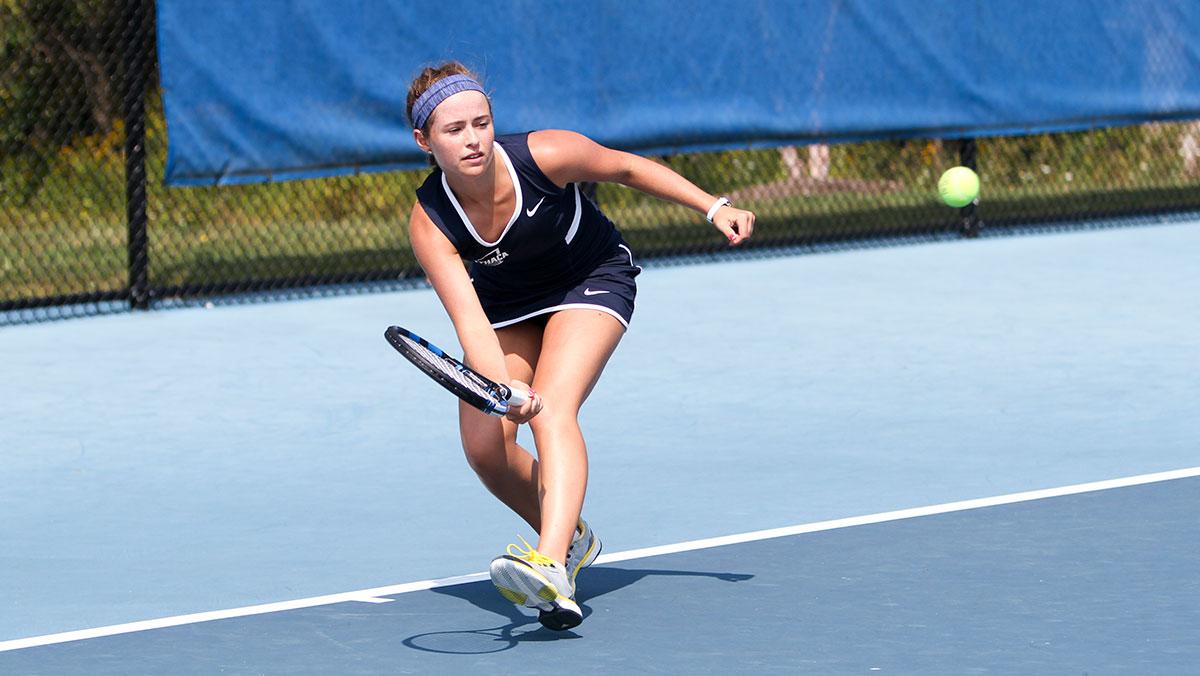 The women’s tennis team started its season off on a high note, defeating Utica College 9–0 Sept. 5, at the Wheeler Tennis Courts. The reigning Empire 8 champions looked in sync throughout the day, stifling any comeback attempts from the Utica Pioneers.

The Bombers began the day by winning each of their three doubles matches, led by junior Haley Kusak and senior Marni Blumenthal. The duo got off to a fast start and didn’t look back, eventually topping the Pioneers 8–0.

The South Hill squad only allowed one point in the three doubles matches, a testament to its preparation and chemistry, Kusak said.

“I think we all played really well.” Kusak said. “It was our first match, so it’s always tough at first. We’re not used to it. But everyone pulled through.”

The contest also marked only the second first time Kusak and Blumenthal have ever played together during their college careers.

“When I was a freshman, I think we played one match,” Kusak said.

Kusak and Blumenthal weren’t the only stars of the doubles matches, however.

Juniors Chessa Mehlman and Sydney Greenspan looked sharp throughout their entire match, eventually finishing on a dominating run, which resulted in an 8–1 victory.

During the singles matches, it was more of the same for the Blue and Gold. Freshmen Caroline Dunn and Shayna Ginster, who played second singles and third singles, respectively, each won in straight sets without dropping a point in their South Hill debuts.

Freshman McKinleigh Lair played in first singles and looked shaky at the start of her Bomber career.  With a powerful serve, Lair was consistently missing her spots throughout the first few minutes of the match.  After going down 1–0, not an insurmountable lead by any means, head coach Bill Austin gave her a pep talk — and something clicked.

During the break, Austin told Lair to “make the court smaller,” a common phrase in tennis used to let players allow the game to come to them.

Once action resumed, the Oklahoma native was suddenly hitting her spots on every serve, while her quickness and athleticism allowed her to reach every return and hit them back with force.

When every other match had ended, Lair had just entered the second set. With her teammates rallying in the crowd, Lair pulled through and finished off the match, eventually winning 6–2, 6–0.

Lair certainly wasn’t the only highlight of singles matches, though.  In sixth singles, freshman Kathryn Shaffer cruised to a 6–0, 6–1 victory in her Blue and Gold debut.

Coming off a 14–9 season and a 10th straight Empire 8 championship, Austin said he was pleased with his young team’s play but will look to work out some of the issues seen throughout the day, mainly several unforced errors.

The Blue and Gold will play their next contest at noon Sept. 12 at St. John Fisher College in Rochester, New York, before returning to South Hill to take on Nazareth College Sept. 14.