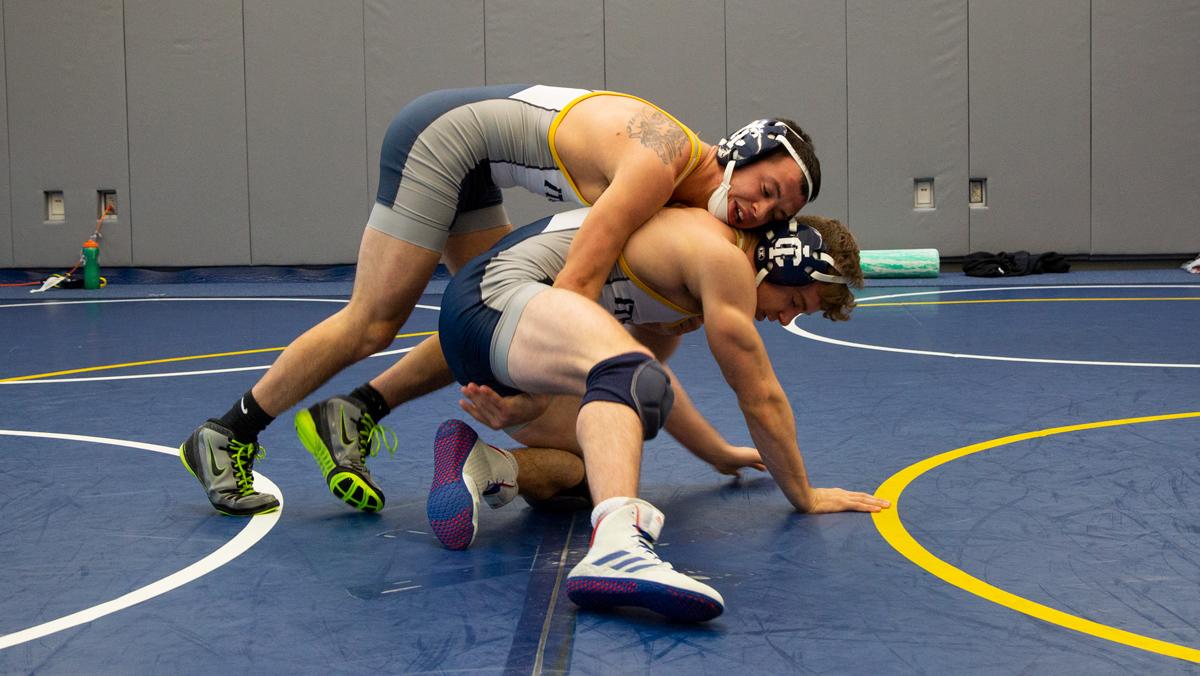 The Ithaca College wrestling team is looking to keep up its impressive winning record as it heads into the 2019–20 season. The South Hill squad has finished in the top five of the NCAA Division III championship tournament the past two seasons.

As head coach Marty Nichols heads into his 24th year coaching the Bombers, he said he wants to keep up the consistent nature of the team and eventually climb the ranks to become NCAA champions. Last season, the team finished in fourth place at the championship tournament, and they placed third in the 2017–18 season.

“Our goal is to get 1% better every day and to move up above third,” Nichols said. “To maintain that is a difficult thing to do, but we have the talent in our wrestlers and our coaching staff, so we’ll see what we can do.”

The team also had five NCAA All-Americans on the roster last year. Of those five, two are returning for the 2019–20 season, senior Ben Brisman and graduate student Austin Whitney.

Brisman, who wrestles in the 141-pound class, has experience becoming a national champion. He won the title in the championship match of his 2017–18 season and is looking to get back there for his senior season.

“It is something I will carry with me for the rest of my life,” Brisman said. “I am going to go down in history, and I believe I will leave a legacy behind here at Ithaca College.”

Brisman is looking to focus much more on the mental aspect of the sport this season. He said he wants to worry less and have more fun, and he believes that should allow everything to fall into place for him.

Alongside Brisman and Whitney, the team also has other strong returners, including senior Tito Colom and sophomore Eze Chukwuezi.

Redshirt sophomore Sammy Schneider is a key returner for the team in the 157-pound weight class. In 2017, Schneider began an exceptional first season with a record of 17–3 when an injury to his knee during the National Wrestling Coaches Association National Duals took him out of competition for a year and a half. Colom said he believes his return to the team could take the team to the top this season.

Colom will be making the transition from the 133-pound weight class to the 125-pound class because he said he believes that is his best chance to win a national title. Coach Nichols said that he thinks Colom is a top-four wrestler in the country and that he cannot wait for Colom to get on the mat this season.

Colom ended his season strong last year with a nine-match win streak heading into the NCAA Midwest regional tournament. He said he is looking to build off that strong finish to his season last year and start the 2019–20 campaign with a similar streak.

“I’m working hard every day, showing the younger guys new moves and just looking to take advantage of every opportunity that comes my way,” Colom said.

Nichols said that the Bombers have a talented freshman class of 12 wrestlers coming in and that he cannot wait to get them used to the swing of things.

“We have a good freshman class coming in who I believe can step in when needed and do really well for us,” Nichols said.

At this point in time, Nichols said, he is focusing heavily on weight training and conditioning to get his squad ready for the season.

Nichols’ goal this year is no different than in previous years. He said that he will settle for nothing less than a trophy and that it is something he shoots for every year. He said he believes this team can add to his already packed trophy case.

“We have a top team for sure,” Nichols said. “If you find yourself in the top five toward the end of the season, anything can happen.”

Brisman said that Nichols is giving them the confidence they need to become national champions this year.

“He tells us every day that we are going to be national champs so that we will believe it ourselves,” Brisman said. “He believes in us more than we believe in ourselves.”

The squad is fortunate to have the home advantage of the NCAA Midwest regional tournament this year. Colom said that this will take the stress of traveling off the team. The South Hill squad opened its season Nov. 1, when it finished third in the 36th annual Ithaca Invitational. They had three wrestlers take home first-place honors.

When the men’s basketball team fell 94–89 to Utica College on Feb. 5 in Ben Light Gymnasium, the players knew they would have to win their next five games to capture the Empire 8 regular season championship.

Blue and Gold peaking at pivotal point in season