Wrestling grapples for a championship 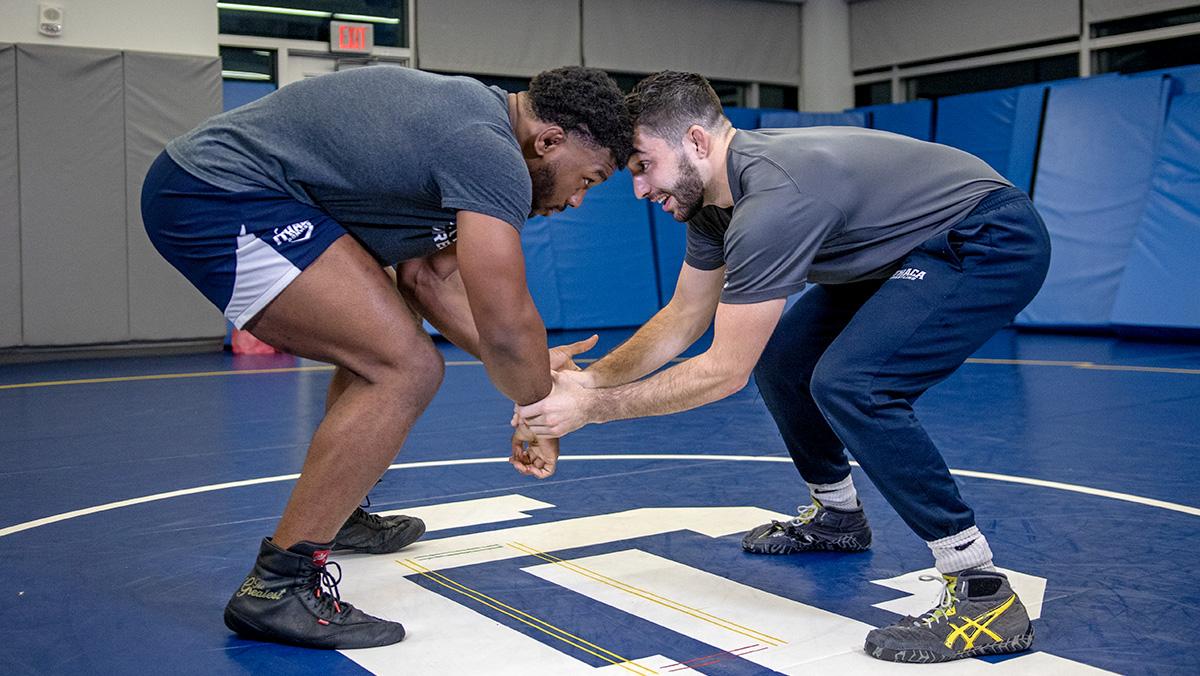 On Nov. 4 and 5, the Ithaca College wrestling team hosted the Ithaca Invitational in the Athletics and Events Center, the first event of the season for the team. For the first time since Spring 2020, spectators can attend matches as the Bombers look to build on an impressive 2021–22 season.

The Bombers finished last season with an 11–4 record in dual matches, ending the season with a second-place finish in the NCAA Regional tournament and 27th place in the NCAA Division III Championships.

Senior Matt Beyer said the team is excited to have most of its fans back and having kicked off the season at home with the Ithaca Invitational is a great way to welcome them back.

“[The fans] will definitely bring more energy to matches,” Beyer said. “I have a few tough guys in that bracket, I’m ready to wrestle, and hopefully we can start to work toward getting to Nationals.”

After making a name for himself as a first-year student, Beyer made a big jump last season, posting a 32–7 record with a fourth-place finish at NCAA Regionals. Beyer said the key to making his next step is to enjoy himself on the mat.

“The key is to stay relaxed every time I compete,” Beyer said. “The more fun I’m having, the better I wrestle.”

Beyer is one of many wrestlers on the team looking to make a name for themselves, whether on the national stage or as a breakout athlete.

Graduate student Eze Chukwuezi won his NCAA Regional bracket in the 184 pound weight class, making a run to fifth place in the NCAA Championships. Chukwuezi lost his second round matchup before winning four straight matches in the consolation round.

After experiencing a fourth-place finish in the NCAA Championships as a team in his first year, Chukwuezi said he believes this team has the opportunity to solidify itself as a top contender.

“This is the strongest team I’ve seen since my first year of being here,” Chukwuezi said. “I feel like we’ll be able to repeat that success, if not more success, with the team that we have.”

Chukwuezi is also nearing the program’s record books, 11 wins away from the distinguished 100-win mark.

“It’s exciting to have that accolade [in reach],” Chukwuezi said. “Being one of the older guys walking out of the door, it would be cool to get 100 wins and cement myself in Ithaca [College] wrestling history.”

Seniors Travis Jones and Luis Hernandez, who took second place in the NCAA Regionals at 141 and 133 pounds, respectively, will also be leading the team this season.

“All, those guys are looking pretty tough,” Nichols said. “We have a bunch of guys who have been doing well. You never know what’s going to happen, and just keep getting better.”

Despite being apart for the summer, Beyer said the team looks prepared and ready to jump into the season.

“[Chukwuezi and I] were wrestling, running and lifting every day and the other guys were doing the same thing at home,” Beyer said. “Since we’ve gotten back, the guys have been in the wrestling room every day on top of our lifts and our runs and everybody is looking really sharp.”

Nichols said the team is picking things up pretty fast, noting the energy and excitement to begin the season after two years of restrictions from the COVID-19 pandemic.

“The pandemic really slowed things down,” Nichols said. “Now the guys have had a whole year where we’re here together and you can see the difference. All the guys who were here now know fully what’s going on and they’re helping with the younger guys, so it’s been great.”

Despite the excitement of getting back to the mat, this year is still business as usual with high expectations in sight.

“Our team wants to put the pressure on ourselves to propel ourselves to get better,” Chukwuezi said. “After every practice, we shout ‘National Champion.’ That’s our goal and we apply the pressure that we need to make that happen.”

Beyer said the team is as motivated as ever this year, and ready to build on the success of last season.

“This is a great group of guys this year who all have common goals and similar behaviors,” Beyer said. “We all have a passion for wrestling and I think we have an unbeatable work ethic we’ve got going on.”

The Bombers travel to Stevens Institute of Technology in Hoboken, New Jersey for a 7 p.m. matchup Nov. 11.