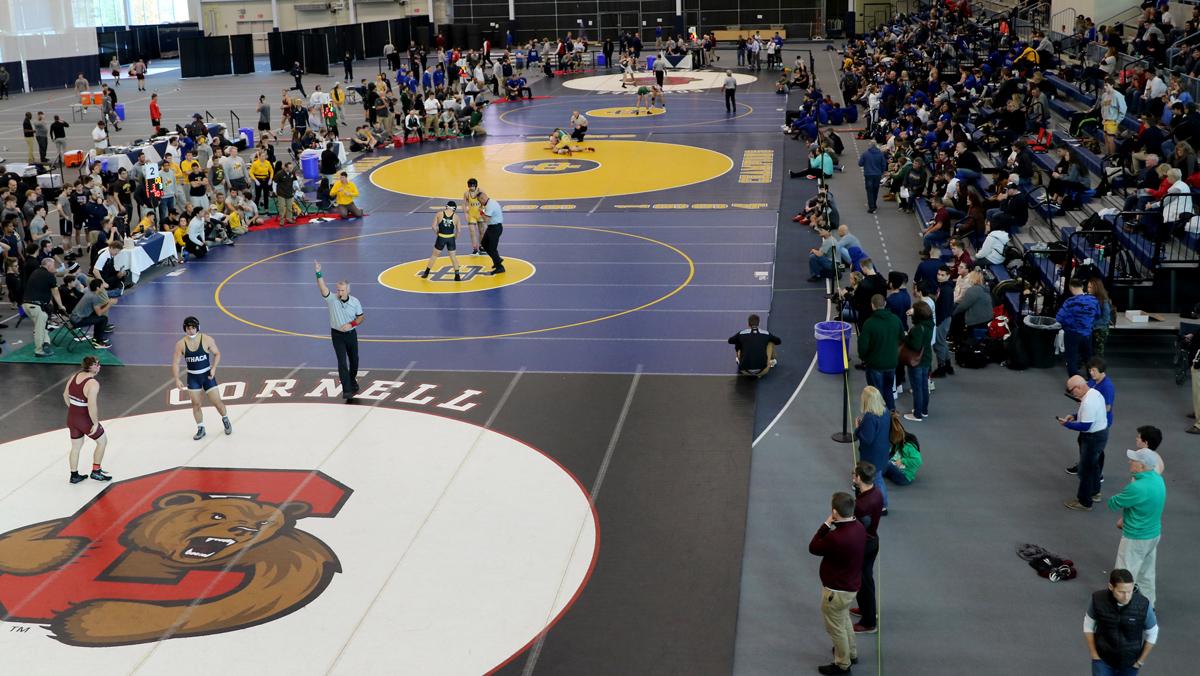 The 35th annual Ithaca College Invitational took place this weekend, on Nov. 1 and 2. Glazer Arena was filled with screaming parents and high energy wrestlers looking to make their mark on the first tournament of the season.

The Bombers had a successful opening weekend finishing 3rd in team points in the tournament with five top-three finishers.

“We had some really good teams here today, which is good it gives us a challenge and shows us where we are as a team,” head coach Marty Nichols said. “Now we know what we have to work on.”

Redshirt sophomore Sam Schneider saw his return to the mat this weekend after missing last season with a knee injury. Schneider, who competes in the 157 lb weight class, beat his two opponents by technical fall before he medically forfeited prior to the quarterfinals round.

Sophomore 125-pounder Logan Ninos was able to finish first on the podium in his first tournament of the season, beating Joey Manginelli from Springfield College by decision, 9-5.

Junior Jordan Wallace debuted his first competition as a Bomber after transferring from University of Maryland last year. The 174-pounder came out strong and showed fans that he is going to be a centerpiece of his team this season. He outscored his opponents 70-17 on his way to a first place finish.

“I was a little rusty at first, but definitely excited to get back on the mat,” Wallace said. “This is such a huge confidence booster for me and I’m going to try to keep myself at this level.”

Nichols worked with Wallace quite a bit on the mental side of wrestling in preparation for his first tournament in three years.

“He could tell I was hesitant in the first couple periods,” Wallace said. “So he told me to go out there and have fun, and that’s what I did.”

Nichols said that if the Bombers make a run at the national championship this year, Wallace will be a huge factor in how far the team goes.

“He did a great job at the tournament today, and he is going to be important to this team moving forward,” Nichols said.

In addition to Wallace and Ninos securing the champion spot, sophomore Eze Chukwuezi placed first in his weight class as well. The 184-pound sophomore started his season exactly the way he wanted, finishing the invitational at the top of the podium. Chukwuezi won his finals match by decision 9-4, over Jason Hoffman of Castleton University.

Nichols said it is always important to start the season at home and holding the opening tournament of the season is huge for the team.

“It is awesome for our team. We get to be here to get prepared and get our guys down to weight for the first time,” Coach Nichols said. “It is a much better situation for our guys to learn and how to get better, being at our own place.”