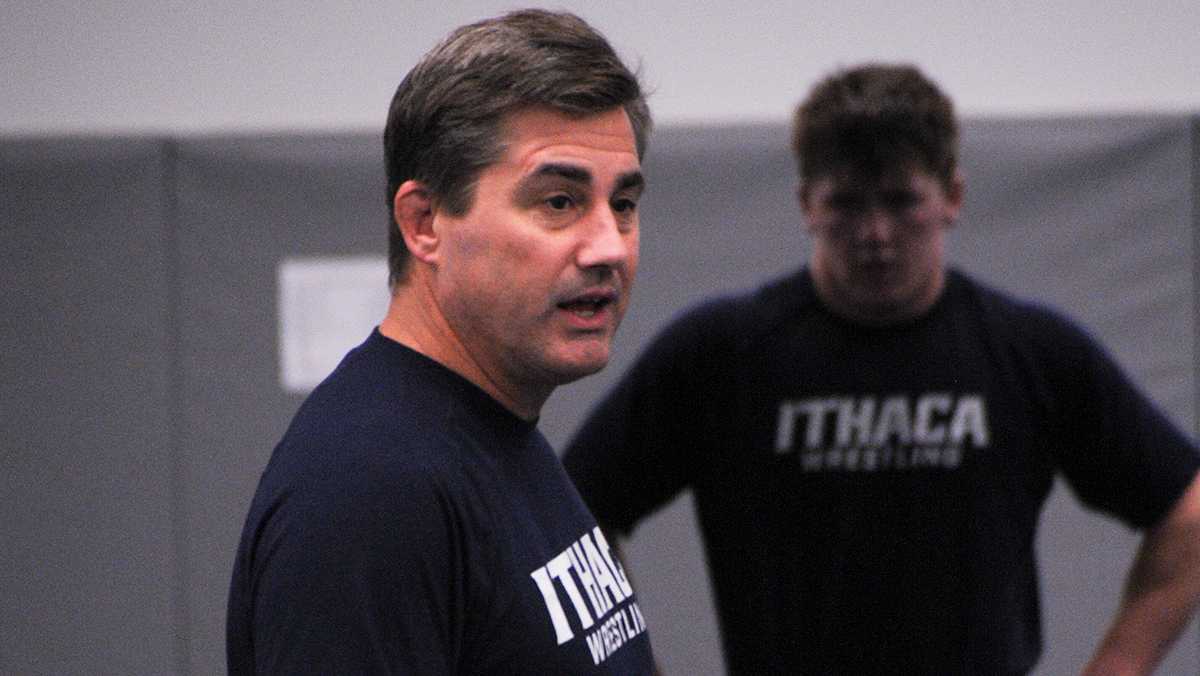 Wrestling head coach Marty Nichols has been leading the Ithaca College wrestling team to one of its best seasons in the program’s history this year.

After winning the NCAA Northeast Regional Championship on Feb. 27 and 28 for the second consecutive season, Nichols was honored with the prestigious Coach of the Year award. The Blue and Gold now find themselves in a prime position to take home hardware from the NCAA National Championships on March 11 and 12 in Cedar Rapids, Iowa.

Staff Writer Cal Dymowski spoke with Nichols to discuss the memorable season, his award and the team’s preparation for the season’s biggest meet.

Cal Dymowski: How does this season differ from ones in the past?

Marty Nichols: Well, every season is different for sure. Depends on the guys on the team and how you go about things. Obviously, you try to get to the same place at the end of the season, but there is a different way to go about it, depending where they’re at developmental wise. I think we’re in a good spot right now, and I’m excited for this weekend.

CD: You won the NCAA Northeast Regional Championship for the second consecutive time this season. How do you carry that momentum into championship weekend?

MN: The team we beat, Roger Williams [University], were ranked third in the country, and Cortland was ranked fourth or fifth in tournaments. … But the guys knew that they could beat them, and they did it again when it counted. The guys have a lot of confidence; they just focus on what they need to do, and they’ve been doing a good job all year. I expect the same thing out of them this weekend.

CD: What are you expecting from the six wrestlers going to the national championships this weekend?

MN: The Nationals can be, and is, a crazy thing. There’s going to be a lot of upsets, a lot of crazy matches out there, but we expect to do really well out there, and if the guys just focus on what they’re supposed to be doing, on our technique and that type of thing, I think they’re going to be fine.

CD: What’s the mindset and the preparation this week?

MN: The guys were a little tired last week. … We gave them Saturday off to let them recuperate a little bit, and I’d say all of them have bounced back pretty good. Once they get this stuff taken care of today, I think they’ll start feeling a lot better once we get on that plane and get out there and get a good night’s sleep will be a big help for them.

CD: So you received the Coach of the Year award this season. Out of all the awards you’ve received, how is this one different?

MN: I guess I don’t know how they’re different. But it’s always good. Last year, we had an Assistant Coach of the Year when Dave Auble won, and we brought in a different assistant, Seth Ecker, who’s a two-time national champ for us, and he won it this year, so it’s good to have those guys get that award and to be consistent in that type of thing. They’ve been doing a good job, and we’re lucky to have those guys here as our assistants to help these guys out.

CD: What’s the dynamic between you and Seth Ecker like? How has that positively translated to the performance this season?

MN: When you have a new coach — well, first thing, he wrestled for us, so he knows our language and what we’re talking about. Coaching is a totally different thing, so getting to know each other, our styles of coaching, how we talk to the guys, our expectations and all those things, it’s a work in progress.

CD: How does it feel to have that team be so close to you and so close to each other and want to come back every season and give 100 percent? How does that feel as a coach?

MN: The guys have developed that over the years. All of our teams — and I was lucky to wrestle here and compete here — and all the teams just kind of keep replicating that thing. Expectations are very high that this is where we expect to be.

CD: After this season, what’s the blueprint for success the next few seasons?

MN: We got to keep bringing in some good recruits. That’s the main thing. … I think we’re going to have five Scholar All-Americans this year, more than a lot of teams, so we’ll be one of the top in the country. There’s very rarely five guys on the team who are Scholar All-Americans. Overall, they’ve done a great job, and that’s the focus: do well in school, and being a good citizen for sure. Be part of the community.