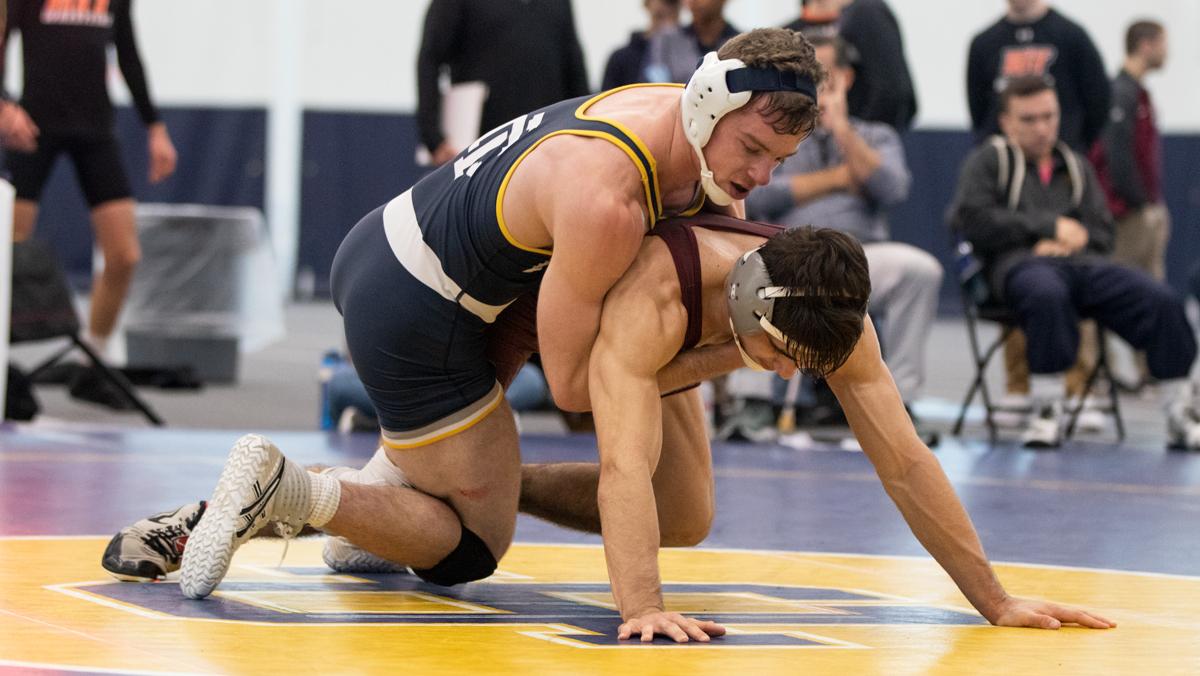 The Ithaca College wrestling team kicked off the 2018–19 season with the 35th Annual Ithaca Invitational on Nov. 2–Nov. 3. The Blue and Gold started off strong and started the first day’s events with 42.0 team points and finished with 167.0.

The South Hill squad saw 31 of the 40 total wrestlers in action. Of the 31 entrants, 28 held a position in the brackets and moved onto the second day. Fifteen Bombers found themselves undefeated and in the championship bracket, including all five of the team’s returning NCAA Championship qualifiers: senior 125-pound Ferdinand Mase, senior 184-pound Jake Ashcraft and senior 285-pound Jake O’Brien, along with 141-pound juniors Tito Colom and Ben Brisman. All 15 wrestlers began the second day in the Quarterfinal Round of their weight classes.

Mase and Ashcraft each only wrestled one bout on the first day, with Mase kicking off the day with a second-period pin at 4:45 on sophomore Tyler Tweedie of New England College. Ashcraft also recorded a fall when pinning freshman Nathaniel Stemple of Rhode Island College in 1:06. Colom had a second-period pin at 4:58 against Springfield sophomore Logan Fox and a 23–14 major decision over freshman Tyler Schultz of Castleton University.

The Blue and Gold concluded the tournament with a total of 13 place-winners. Mase scored a 4–0 decision over New England sophomore Diego Santiago. Brisman had a 10–3 decision over Castleton junior Max Tempel. Senior Austin Whitney recorded an 8–3 decision over Springfield senior Aarin Feliz while Ashcraft topped things off with a 4–0 over John Boyle, Western New England junior.

Ashcraft was named Most Outstanding Wrestler at the end of the event. He finished the weekend with a 4–0 record that included three first-period falls and the 4–0 score over Boyle in the final. He did not give a single point to an opponent on the weekend.

In his first return to competition after his one-year out, junior Al Ciccitto took home the Most Pins Award by recording five pins in the least amount of time.

The Bombers will be back in action at 10 a.m. on Nov. 10 at the Northeast Duals in Troy, New York.