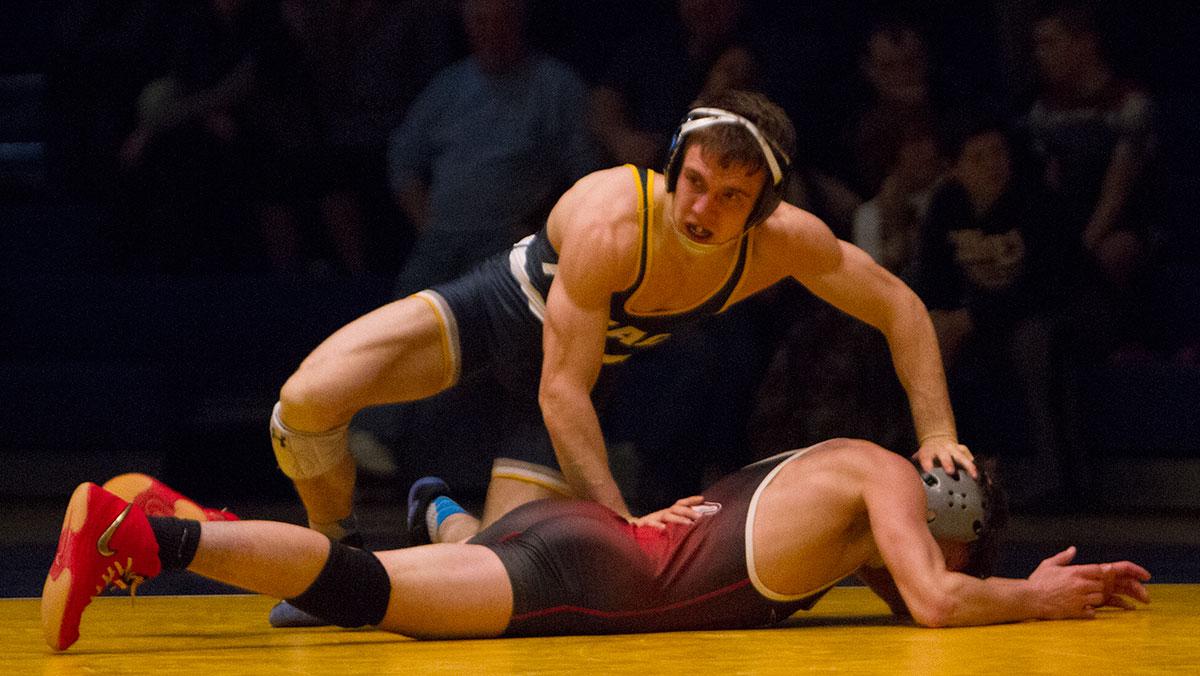 Upon entering the wrestling room in the Hill Center, one becomes immediately aware of two things. The first is the smell of sweat from intense practice sessions. The second is confidence, which is even more overpowering than the sweat of 30 or so male collegiate athletes.

Confidence is key in any sport, and it is something the members of the wrestling team have plenty of.

The Bombers own a record of 9–2, placing second or better in three of their four tournaments so far this season. They are currently ranked 10th in the nation, according to the National Wrestling Coaches Association. The NWCA also ranks two individuals, senior Alex Gomez and sophomore Nick Wahba, within the top-10 individuals nationally for their respective weight categories.

The South Hill squad’s head coach has the most wins in the program’s history. Head coach Marty Nichols is in his 19th season with the Blue and Gold, compiling a 207–80–1 record along the way. He has coached several national champion wrestlers but never a national champion team.

This season, though, the Bombers seemed to be just on the cusp of putting together a national champion team, even though they have not taken down a ranked opponent.

At the Spartan Invitational at York College on Dec. 6, 2014, the team placed second to then-fourth-ranked Delaware Valley College by a mere eight team points.

As a result, the Bombers needed to bounce back against ranked competition at the Division III National Duals in Fort Wayne, Indiana. However, they could not find a way to take down then-eighth-ranked Coe College or then-sixth-ranked Wisconsin-La Crosse as both matches came down to the final round.

Nichols said the team was put in a tough spot in those matches. Even though the heavyweight wrestlers were winning the matches, Nichols said they had to wrestle aggressively for the pin to secure a team win.

“They tried to pin the guy … or else it would have been relatively close,” Nichols said. “You know, against teams like that, you can’t make mistakes.”

It seemed the Bombers would fall just shy of taking down a top-ranked opponent until their match against Delaware Valley College on Jan. 31. It was the team’s first win against the Rams since 2012, taking the match by a team score of 18–14.

Nichols and the wrestlers said this was a winnable match by their standards.

Gomez pointed to his teammate sophomore Carlos Toribio, who won his match, as an X-factor down the stretch.

“Having a national-rank guy in the lineup, that makes the team that much stronger,” Gomez said.

Toribio asserted himself as a dominant wrestler from the beginning of his freshman season, compiling a 24–6 overall record and an NCAA Nationals appearance. He started this season injured due to a concussion and sinus infection, but he said he has been ready to see live action and has been competing for several weeks.

“I feel great, I feel ready,” Toribio said. “Coach was doing whatever we needed so I could be ready to compete with these guys.”

Toribio said he wants to lead the team by example, letting his teammates know they are prepared for whatever comes their way.

Freshman 157-pounder Nick Velez is taking after Toribio, as he holds a 26–9 record so far this season.

Velez said while there is a sense of urgency to win these last matches, he tries to focus on each one individually.

“I’ve wrestled thousands of matches and treat them as the same thing,” Velez said. “I feel like once you treat something special, it kind of puts more pressure on you and it prevents you from performing your best, so I kind of like to keep everything the same.”

Gomez said he feels confident in the team’s abilities, but sees the need to further improve for the tough competition that lies ahead.

Gomez said practices will become more intense as the season goes on, focusing on building endurance and perfecting moves.

“You know, we’re going to go to the point where we’re going to break each other,” Gomez said. “Which means push ourselves to exhaustion, and that’s what we are going to have to do.”

Nichols said the remaining matches are not only important for national rankings but also to continue to develop an already apparent aspect of his young men.

“To win those matches is really important for seedings at the nationals,” Nichols said. “And to get your confidence up for the regionals, to get yourself to the national tournament.”

If the team can continue to improve on those three attributes — endurance, technique and confidence — Gomez said he believes they can do more than compete for the national championship.

“I think we could be national champs and just everybody has to believe in being on top and really putting it all together, what we have been learning all year,” Gomez said.