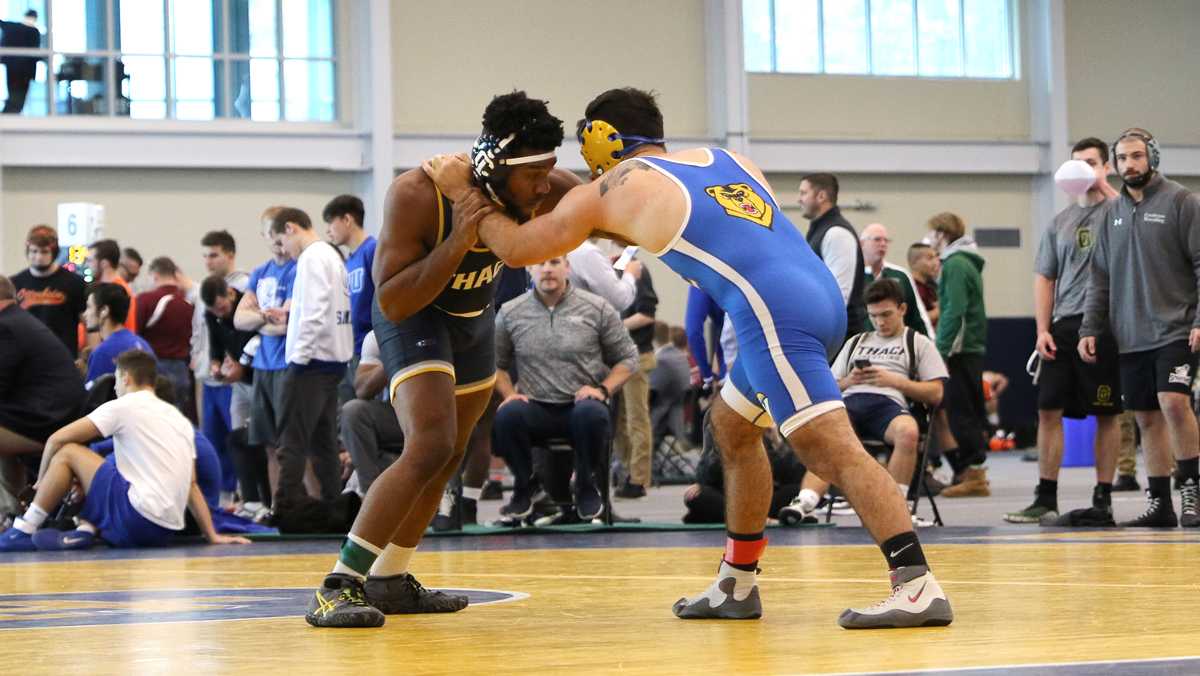 The Ithaca College wrestling team has shown it has the strength to receive national recognition thus far in the 2019–20 season. As the season begins to wind down, the Bombers are looking toward the postseason to add another trophy to their case.

With a 6–4 record overall and an Empire Collegiate Wrestling Conference (ECWC) under its belt, the team is nationally ranked 14th in the NCAA Division III.

The Bombers are not only ranked as a team, but three wrestlers are individually ranked in the top 10 of their respective weight classes nationally. Sophomore Eze Chukwuezi currently sits at ninth in the 184-pound weight class in Division III. Graduate student Austin Whitney sits at sixth at 165 pounds, and junior Jordan Wallace sits at sixth at 174 pounds.

Being the 14th–ranked team in the country leaves the Bombers room to improve, but Wallace said the Bombers still have the national championship within their grasp.

“As a team, if we can pull some strings together, we can still get that national championship,” Wallace said. “We have some moving around in the lineup, setting up for the postseason push. If everyone can compete at their best and stay healthy, we have a good shot at the top spot on the podium.”

Ithaca College head wrestling coach Marty Nichols ’90 said he believes this win will motivate the team and Chukwuezi himself.

“The guys see that,” Nichols said. “They get more confidence in themselves, confidence in each other and confidence in what we’re trying to accomplish. Eze was pumped, and he wanted to do that for himself. It will reflect well in seeding at nationals this year, and hopefully he can win regionals and get out to nationals as a top-five seed.”

Chukwuezi said that sticking to his game plan is the biggest reason he was able to knock off Boyle.

“Through most of my matches, I stay composed,” Chukwuezi said. “Just because he’s a national champion doesn’t mean I should take myself out of character and wrestle differently than I should.”

Nichols said the team has been working a lot lately on staying focused on a game plan and executing it.

“We work on forcing our skills and strategy onto our opponent,” Nichols said. “We have to stay on it for the whole match. We can’t give up after two to three minutes and wrestle their style. … It doesn’t matter if a guy is ranked or not, if you focus on your game plan, you will win consistently.”

Wallace said he does not believe rankings dictate overall success throughout the season. He also said that when he is facing another opponent with similar skills, he prepares differently mentally, and it brings out another competitive edge to the match.

“Top seeds may get better spots at tournaments, but, at the end of the day, you have to beat everybody,” Wallace said. “You just have to be ready to wrestle at all times.”

Nichols said he hopes to withhold the legacy of the Bombers wrestling team and to keep them on top for years to come.

“As being a guy that competed here, it is important that we hold up to tradition,” Nichols said. “If you go into the wrestling room, you see the All-Americans and national champions up on the wall. That’s what we are working towards. We want to uphold our standards to guys from the past and continue the level of excellence.”