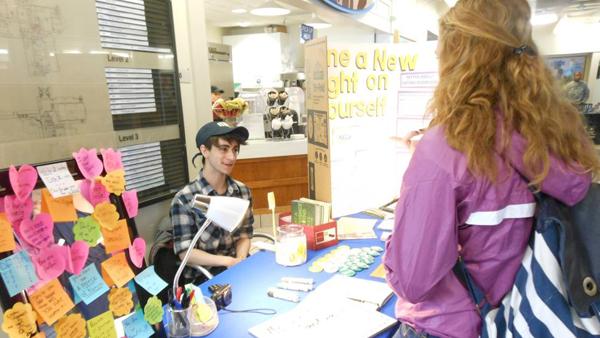 Courtesy of Mary Kate Fain
Freshman Casey Lauser sits at a table for Eating Disorder Awareness Week from Feb. 24 to March 2 in the Campus Center lobby. Active Minds will host the event “Everybody Matters” from 7:30 p.m. to 9:30 p.m. April 9 in IC Square.
By Emma Rizzo — Staff Writer
Published: April 3, 2013

After remaining silent about her mental health struggles during her childhood, junior Mary Kate Fain, co-president of IC Active Minds, was inspired to speak up after hearing a spoken-word poem performed about similar struggles during her freshman year. Hearing the applause and support from the audience, she learned of the supportive group on the Ithaca College campus working to erase mental health stigma.

IC Active Minds is a group that works toward framing mental health in a positive way. With the support of the Ithaca College School of Music, Active Minds is hosting its fourth annual “Everybody Matters” event from 7:30 p.m. to 9:30 p.m. April 9 in IC Square. The event will feature student musicians, poets and speakers, and will focus on the theme of self-expression and self-positivity.

The overall theme of “Everybody Matters” is meant to take a stand against the negative stigma surrounding mental health illness and the tendencies to ignore the issue, Fain said.

“This gives people a literal stage to voice what they’re really feeling, and I think that’s something that’s really empowering for people,” she said.

Featured acts will include performances by senior Will Shishmanian, members of Spit That!, IC Voicestream and Premium Blend. Other mental health advocacy groups will be at the event as well. To Write Love On Her Arms will have a table set up for people to learn about their mental health cause, and The Mirror magazine, a literary magazine that focuses on mental health, will be distributed.

Heather Ryan, a psychologist from the college’s Center for Counseling and Psychological Services, will attend the event to talk about the mental health resources available on campus.

Sophomore Jared Wolf, co-president of IC Active Minds, said the aim of the event is to bring talented people together to express themselves and to inspire those in the audience to seek further understanding of mental health.

“For so many people all across the mental health spectrum, creative expression is one of the most important coping mechanisms,” he said.

Fain said she expects the overall atmosphere of the event to inspire people to participate in the conversation about mental health.

“I expect that the event will be a really fun, creative outlet for a wide variety of students to come and talk about mental health in a fun and safe environment,” she said. “I think it should encourage people to start talking about these topics.”

Freshman Katie VanValen will be performing a cover of “Make You Feel My Love” by Adele. She said she connects the song to the theme of suicide and bullying, and said she would like to encourage people struggling with bullying to reach out.

“The main goal is to shed a light and know that people are there for you,” she said.

She also said she hopes people will be able to embody the theme of self-positivity and pass the idea on to other students.

“When people take away that we really want them to focus on the really good attributes of themselves and feel like they really have a place, they will go off and tell other people,” she said. “I think they’ll just make other people’s days even better.”

Wolf said he turned his experiences with mental health into something he could share with others, and he hopes that other students will be inspired to do the same.

“Everyone’s experiences that shape them are completely different, and everyone does that in a different way,” he said.

Everybody Matters is the first of three events Active Minds will host this month, including the Speak Your Mind panel and Active Bodies, Active Minds — a fundraiser in honor of the 10th anniversary of Active Minds that will involve physical fitness stations and prizes. Wolf said he believes all students will benefit from attending the event, and he hopes others will be inspired to speak their minds as well.

“Everybody has a voice,” he said. “They all matter and they all make a difference. They’re all worth being put out there.”