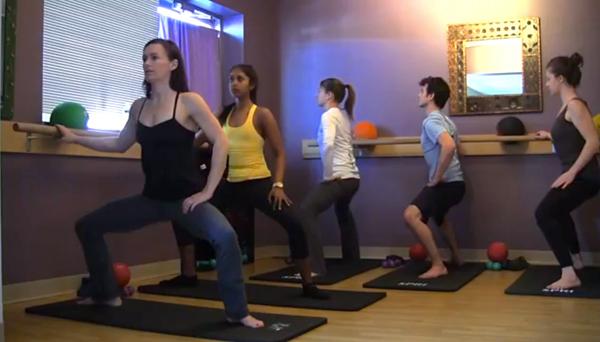 With one hand on a ballet barre, pivoting their hips to the tempo of fast-paced music, 10 students follow directions from instructor Dianne Sheppard inside Blackbird Studio in Ithaca.

“Step your toes right under your barre,” Sheppard said. “It’s a hell of a way to start a Saturday morning,” she added with a smile as she moved students on to a deep thigh-toning movement.

Though barre was created in the 1930s, the ballet-inspired workout has recently surged into fitness scenes in cities across the U.S., similar to the way the Latin-inspired aerobics workout Zumba took over the scene last year. Targeting the core, like Pilates does, barre has made it to the top of 2013 fitness trend lists, and a March article in the Boston Globe said “2013 is the year of the barre.”

Though workout trends like Zumba and Boot Camp are sometimes scoffed at in the fitness community, Joy Swanson, director of Cornell/DNS post-baccalaureate certificate program in health studies, said trends like barre can encourage long-term fitness.

“It’s the same as dieting,” Swanson said. “People will try different diets to see which will work for them, so they try to find which fitness trend will fit their lifestyle the best. When people see fitness trends in the media, it encourages some people to engage in that and incorporate it into their life better than others.”

Out of more than 20 Pilates studios in the Ithaca area, three offer barre classes. Barre fitness has been taught since June in the Pilates Room in Ithaca. In January, the studio added eight feet of barre space to accommodate more clientele, Tori Brown, director of the Pilates Room said.

“We have about 20 people who are regular to some degree in at least one of the three barre classes we offer,” Brown said. “We max out at about 12 students in a class, and it is not uncommon for us to have that many.”

Brown said barre draws mainly women because of the workout’s association with what she calls the “ballet body ideal.”

“Ballet dancers are well toned,” Brown said. “They have muscular bodies but not huge, big muscles, and I think that’s an attractive feature of the workout.”

“If you were taking a ballet class, you would start with a series of three or four moves thrown together, and you would do that several times and move onto the next move,” Brown said. “That’s how we work the barre in class. For example, a series of slow kicks to the front or low pulses to the front with a slight kick from the side and the back, and then we move onto the next part of the body.”

Other studios, such as Blackbird Studio, teach barre with a yoga and Pilates fusion. Sheppard’s class adds standard poses like Child’s Pose and planks to the workout, but the rhythm is faster-paced than Pilates, leading to quicker results, Sheppard said.

“It changes your body really fast, so all of the sudden you get a lot of definition,” Sheila Bridges, who’s been taking barre classes since she moved to Ithaca last year, said. “It doesn’t look like cardio, but it feels like cardio.”

That’s why Sheppard insists the barre trend is more than a fad. She said she thinks barre has a future at fitness centers.

“For things like barre and Pilates, there’s a real kind of deep root to it; it’s a mind-body practice, so it’s more like a continuum than an explosion,” Sheppard said. “I think it’s going to be around for a long time.”

This article was originally produced by the Multimedia Journalism 48000 class.