Bollywood actor speaks to students about cinema and culture 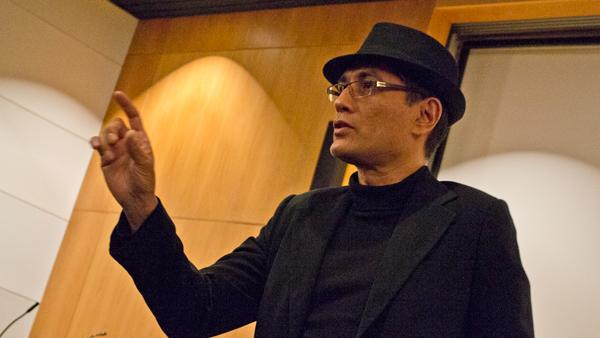 Denzil Smith is an actor of Indian descent and is famed in Hindi theater. With an expansive portfolio of roles, he recently toured with the Australian musical “The Merchants of Bollywood” to commercial success. Having established a renowned position in both Hindi and English cinema, Smith held a significant role in 2011’s critically acclaimed comedy-drama, “The Best Exotic Marigold Hotel.”

Smith spoke at noon Oct. 16 in Park Auditorium to students about his experiences.
Staff Writer Steven Pirani sat down with Smith and discussed his philosophies as an actor, his experiences on tour and his relationship with both Bollywood and Hollywood.

Steven Pirani: You’ve had experience in both Bollywood and Hollywood. How do they compare?

Denzil Smith: They’re drastically different in its function, in the way it works. The processes are different. The movie industry in India, even though it’s the largest industry producing the largest number of films in the world, it wasn’t really organized until recently, when it was given industry status. Otherwise, it was very disorganized. Slowly some organization has come in.

SP: Is this the same case for the theater scene as well?

DS: It’s very hard to compare. India’s theater scene is nothing compared to the west. Here it’s funded by the state, and the scale of production is much bigger. In India we don’t have that. Mostly we don’t have the theater facilities. Now, for instance, I was here in the college just now, and I saw the black box and then the theater, just in a college like this. I was saying, “This is luxurious; look at this.” There is only one black box in all of Bombay — there just is no comparison.

SP: Is the theater industry in India evolving as the movie industry is?

DS: I wish it were, you know? It’s the space constriction. There’s no land in Bombay, and with the price of land, it’s not viable to make land for a theater.

SP: You’ve recently been touring with “The Merchants of Bollywood.” How would you describe the tour experience?

DS: “The Merchants of Bollywood” is commercial theater to the T. It’s traveling theater; it’s on the road. It’s a production which has been enormously successful, and it’s run like a machine.

SP: So essentially it’s a business?

DS: It’s a business. I learned that this is how commercial theater runs — where one hour call, half-hour call, 10-minute call, and then you’re on stage. You don’t change a word, a line or a pause. You consistently deliver every day, eight shows a week, for months.

SP: Do these types of businesses exist in India as well?

DS: No, that doesn’t happen — that’s not physically possible in India. That’s just not possible. The facilities do not exist, nor does the market. The market exists in the larger cities, and it’s physically impossible to travel between the larger cities in a day with so much equipment.

SP: Looking at your portfolio, a large portion is your stage work, but you also work in film. Do you consider yourself primarily stage performer or a film actor?

DS: Acting is acting. There are as many schools of acting as there are actors — I believe that. Every actor has his own way around their craft. Having said that, I prefer the stage. It’s more alive. There’s an energy flow there that sucks me in.